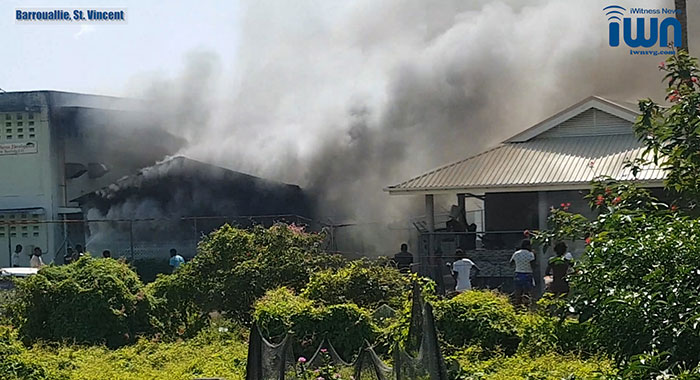 A group of children ran out of a fisheries building in Barrouallie on Sunday afternoon just as thick smoke was seen billowing from it and the fire alarm was raised.

The building, located on the seafront in Bottle and Glass, a fishing and whaling community, was being prepared for use in the processing of “black fish” (short-finned pilot whales) while the government constructs a new processing plant in the Central Leeward town.

It is not clear at what time the fire started, but iWitness News was first informed about it at 1:38 p.m.

In addition to the contents of the building, the whalers’ plans to move into their temporary home next January went up in smoke.

Nonetheless, residents of the town were pleased that the fire was quickly contained, especially as it occurred next to the gas station operated by the Barrouallie Fisheries Development Co-operative Society Ltd.

One person familiar with the operations at the building gutted by fire spoke to iWitness News, but requested anonymity.

The person said that they were in the vicinity when another person shouted, “Fire! Fire!” just as a group of children ran out of the compound. At that time, the fire had reached the roof of the building.

The person said they recognised two of the children and believes they know how the fire started.

This information, however, was not communicated to police at the time of the interview Sunday afternoon.

Asked whether they would tell the police what they had seen, the person said, “maybe; maybe not”.

The source complained that the building was constantly being burglarised although it was being prepared for the whaling operation.

“They need to keep their children out of the compound. This is a business. This is a gas station; no children are supposed to be in here and running up and down. They don’t control their children,” the source told iWitness News.

At the time of the fire, the building contained a freezer, some boxes and cans for storing oil. It had no electricity connection.

A “crazy” man always breaks into the building and sleeps inside of it, the source told iWitness News.

A few villagers and off-duty police officers helped to put out the fire and by the time a fire truck arrived from Kingstown, located 10.7 miles away, the fire had been extinguished.