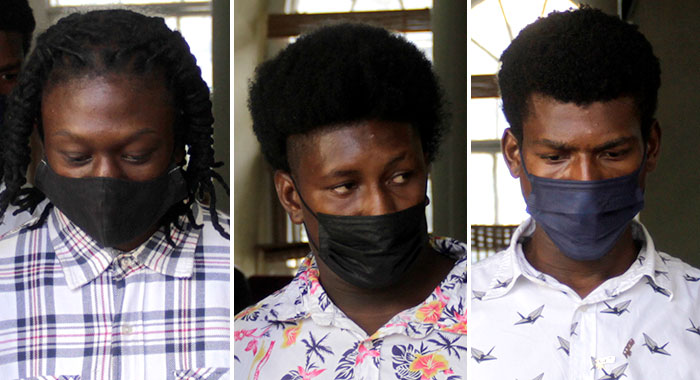 From left, Ozem Oliver, Andreas Bruce, and D’Andre Peters outside the High Court in Kingstown, Oct. 25, 2021 after their sentencing. (iWN photos)

High Court judge, Justice Brian Cottle today (Monday) placed in the hands of three young robbers for the next three years, the keys to their prison cells.

With the suspended prison terms imposed on them, Ozem Oliver, 19, Andreas Bruce, 21, and D’Andre Peters, 20, could each use that “key” to lock himself in or outside a prison cell.

“Gentlemen, you have the keys to the prison in your hands. If you behave yourself for the next three years, that will be the end of that,” Justice Cottle told the men.

He, however, noted to them that  should they breach the terms of the suspension of the jail sentences, they would go to prison immediately for the robbery, in addition to whatever sentence is handed down for the additional crime.

The men were sentenced , having pleaded guilty to a charge that on Aug. 10, 2018, at Glen, being armed with a gun, they robbed Denise Baptiste, of Glen, of one gold J7 Prime Samsung Galaxy cellular phone, value EC$1,100, and at the time of so doing, put Baptiste in fear of being then and there subjected to force.

They further pleaded guilty to possession of an imitation firearm.

They were each teenagers and students at the time of the crime.

Crown Counsel Shackell Bobb appeared for the Crown. None of the men had a lawyer.

In mitigation, they each renounced their desire to be part of a gang and offered their apology to their victim and to compensate her for the cellphone.

Bruce, who was 17 at the time of the crime, told the court that he is now the father of two children, ages two years and 3 months old.

He said that the robbery was not part of a gang initiation, adding that he did not know that Oliver had intended to rob Baptiste.

Justice Cottle, however, noted that Bruce assisted and did not try to stop Oliver. Bruce admitted that this was the case. Responding to the judge’s question about whether he was still interested in being a gang member, Bruce said that he had turned his life around and has been employed as a porter at a local hardware store for three years.

Peters, 20, told the court that he lives in Glen with grandparents and uncle and has been working with a trailer truck operator for over a year.

He said he has no children and does not want to continue to be a gang member.

“No, please. I changed my lifestyle,” he said, responding to the judge’s question about interest in gang membership. “I want to apologise to Ms Baptiste,” the man said, adding that he is willing to compensate her for the cellphone.

Meanwhile, Oliver, the mastermind of the crime, told the court he has changed and wants to do better. “I will try my best,” he said, adding that he is now 19 years old and was 16 at the time of his crime.

“Do you appreciate how dangerous your actions were on that day?” Justice Cottle said, adding that it was possible that a police officer could have come upon the crime and, thinking that the imitation firearm was real, shot Oliver.

Oliver told the court that he is still pursuing his education and has applied to study automotive repair at the Community College.

He offered to “deeply apologise” to Baptiste, adding that he knows that his actions were wrong.

The facts of the case, as presented by the judge, are that on Aug. 10, 2018, Denise Baptiste was sitting on a bench near the Community College in Villa when the trio approached and surrounded her.

Peters’ face was covered with a t-shirt and Oliver had a wrapped object and demanded that Peters hand over her cellphone.  When she hesitated, he took the phone from her and inquired about what other property that the woman had on her person.

Baptiste indicated that she had nothing else and Oliver checked to make sure. Oliver asked her if the phone was unlocked and Baptiste said yes. Oliver checked that this was the case and then the trio ran away with the device.

Baptiste reported the crime to Calliaqua Police Station and police promptly launched an investigation and went to Oliver’s home and executed a search warrant.

Under Oliver’s bed, the police found a cellphone and an imitation firearm and Oliver admitted that they were both from the robbery.

Baptiste took to the police a phone box containing documents matching the serial number on the phone recovered at Oliver’s house.

The police investigation led to the other accused.

In handing down his sentence, Justice Cottle noted that the maximum sentence for robbery is life imprisonment, and 25 years for use of an imitation firearm in commission of an offence.  He noted the aims of criminal sentencing, namely, retribution, deterrence, prevention, and rehabilitation.

The judge pointed to the emotional distress that Baptiste suffered, but also noted that she suffered no physical injury and no excessive force was used in the commission of the crime.

Justice Cottle, however, noted that the robbery was a group activity and an imitation firearm was used to threaten the victim.

He adopted a starting point of 20% of the maximum — six years.

The aggravating features of the case were that the crime was carried out along a public main road by a group and an imitation firearm was used. Further, Peters tried to hide his identity.

Mitigating was the fact that there was minimum violence and the phone was recovered.

Justice Cottle noted that Bruce has no previous conviction, is still young, was three years younger at the time and played a lesser role. Further, Bruce cooperated with the police, confessed his involvement, pleaded guilty at first opportunity, and expressed remorse.

Peters also has no previous condition, was 17 at the time of the crime, cooperated with the police, confessed, pleaded guilty at first opportunity, acted on the spur of the moment, and played a lesser role, the judge found.

Oliver also had no previous conviction, was 16 at time of the crime but played the major role. Oliver, Justice Cottle pointed out, had the imitation firearm, took away the phone from Baptiste, and the phone was found at this home. He, however, cooperated with police, expressed remorse, and had acted impulsively.

After considering the mitigating and aggravating features of the case, the judge reduced Bruce and Peters’ sentences by two years and Oliver’s by one year.

He then applied the one-third discount for the early guilty pleas, resulting in a 32-month sentence for Bruce and Peters and 40 months for Oliver.

The judge noted that the sentencing guidelines permit the court to vary sentences in cases where justice merits it. He noted that the trio were teenagers and students at the time of their crime, adding that considering their genuine remorse, the defendants had convinced him that they are good candidates for rehabilitation.

Oliver’s sentence was, therefore, reduced to 36 months in prison and Bruce and Peters’ to 32 months.

The judge, however, suspended the sentence on condition that over the next three years the defendants not commit any offence punishable by more than 6 months in prison.

He further ordered them to pay Baptiste compensation for loss of her phone. Of the EC$1,100, Bruce and Peters are to pay EC$200 each and Oliver EC$700.

Regarding possession of the imitation firearm, the judge noted some of the similar mitigating and aggravating features of the offense and offenders.

He said that the imitation firearm was at all times concealed and there was no ammunition. He, however, pointed out that the crime was a gang activity, which usually places it at the highest level of seriousness.

Nonetheless, since the firearm was an imitation weapon and was always concealed, this placed the offence in medium seriousness.

Justice Cottle started at 25% of the maximum sentence, or six years and three months in prison, reducing it to three years after considering the mitigating and aggravating features of the case.

One year was deducted for the early guilty plea and the sentences were suspended on the same condition.