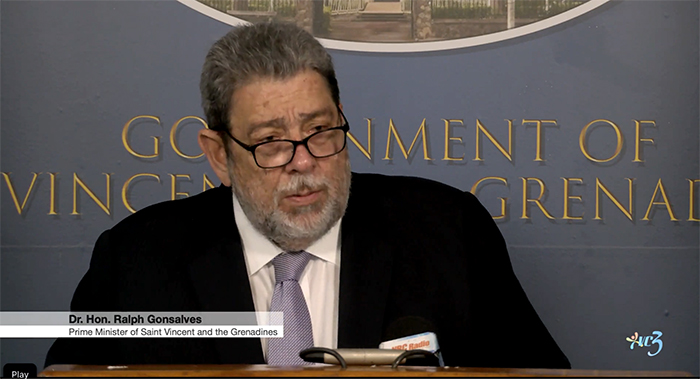 KINGSTOWN (CMC) — St. Vincent and the Grenadines is today (Wednesday) celebrating its 42nd anniversary of political independence from Britain, having to deal with the effects of a volcanic eruption and the global pandemic that has killed 64 people and infected 4,841 others locally since March last year.

Prime Minister Ralph Gonsalves in a nationwide radio and television broadcast, said that the nation had experienced a “monumental beating” from the twin calamities and that “every single family in our blessed nation has suffered”.

But he told the nation as they participated in the scale down activities to mark the anniversary of the independence, it was important that there is unity in rebuilding the country.

“I reiterate, now is not the time for the pursuance of divisive personal agendas inclusive of flaunted vanities, divorced from the real condition of our people’s lives and living”.

“I say to the general public … do not allow anyone to mislead you or divert you from the public interest at this time of peril and uncertainty. And I simply say to those employed in the Central Government and state agencies, much has been favourably delivered to you.

“Much continues to be expected of you. You have been protected by and large from the worst economic consequences of the pandemic and the volcanic eruption. So the general public expect you to pull your weight even more than ever,” Gonsalves said, urging everyone to also take the COVID-19 vaccine in a bid to curb the spread of the novel coronavirus.

Gonsalves said that as the country seeks to deal with the pandemic and the eruption of La Soufriere volcano in April, the focus to develop sustainably “must never be diverted.

“The immediate must not allow us to take our eyes off the ball for the medium term and the longer term. Surely we can walk and chew gum,” he said, adding that the creation of more sustainable jobs is a top priority.

He said these are being made available in the rebuilding of agriculture, fisheries and tourism as well as in the expansion of telecommunications, water and electricity.

“Immense support is being afforded to farmers and fishers. The diversification in agriculture and husbandry is being revived and the medicinal cannabis industry is on the uptake,” Gonsalves said, adding that hotel and tourism industries are also showing signs of rebounding.

The return of international flights is also assisting in the socio-economic development of the nation, Gonsalves said, warning, however, “unless we take the vaccine, the revival and expansion of tourism will be stalled.

“Jobs and livelihoods will be adversely affected,” he added.

Gonsalves said that the government, over the next three years, intends to implement a number of multi-million dollar projects as it seeks to build a new post-colonial economy situated within a global environment.

The government will also embark upon a multi-million dollar road programme as well as an EC$50 million court and parliament project and the further pursuit of the geothermal energy programme.

“My government intends, in short, to proceed apace as resources and circumstances permit with our transformative quest to build a modern, competitive many sided post-colonial economy which is at once, national, regional and global,” Gonsalves said.

“In the process we emphasise a modern economy built with unlimited supplies of skills and knowledge which is priced at an appropriate level in the international division of labour. Hitherto, the economy of St. Vincent and the Grenadines has been based largely on unlimited supply of cheap, relatively unskilled and insufficiently skilled labour.”

Gonsalves said that the education revolution will continue as well as the implementation of public policies “upon which our government was once again re-elected in the last general election”.

But even as he spoke of the future direction of the country, with the assistance of the regional and international community, Gonsalves warned that getting the economy back to a level of normalcy would require assistance from the population.

“This demands, among other things, given the ravages of the Gamma and Delta variants, the vaccination rate of 90% or more of the eligible population 12 years of age and older. If we do not achieve this level of vaccination and a corresponding economic recovery, the government would be unlikely to meet its monthly commitments, including the payments of salaries, wages and pensions”.

Gonsalves said he was making the statement because he does not want to come across as trying to scare the population, adding, “I know the arithmetic … this is not scaremongering.

“At the same time, I feel sure that our people will respond sensibly, responsibly and with greater urgency than before. So I am optimistic about our immediate future,” he told the nation.

Meanwhile, the St. Lucia-based Commission of the Organisation of Eastern Caribbean States (OECS) has congratulated the nation on its independence being held under the theme “With Strength Honour and Dignity, We Stand Resolute at 42 and Beyond”.

A virtual flag-raising ceremony was held at the OECS headquarters in Castries to commemorate the event and featured a recorded message from Gonsalves; and an address by the Director General of the OECS, Didacus Jules.

Jules commended the government and people of SVG on the swift and decisive actions taken to manage the crises of the ongoing COVID-19 pandemic, compounded by the catastrophic eruptions of the La Soufriere volcano, which severely impacted the lives and livelihoods of many.

At a regional level, the OECS Director General acknowledged that the health crisis continues to disrupt key economic sectors which member states rely on, noting that, while swift and effective measures are being implemented to contain the disease, the severe economic impacts require bold and decisive action to mitigate the effects of job loss, dislocation and disruption caused by the pandemics and our multiple disasters.