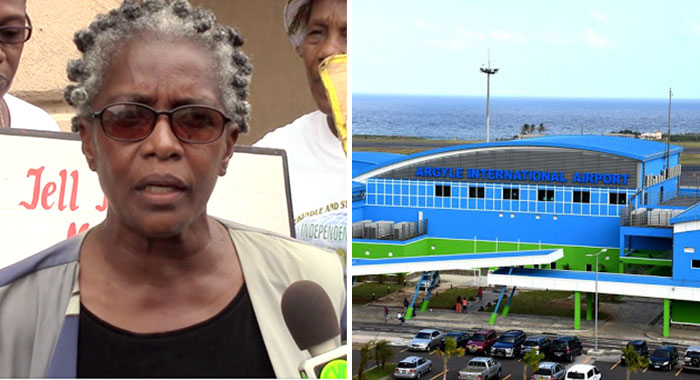 King is alleged to have committed the offences at Argyle International Airport on Jan. 30.

Chief Magistrate Rechanne Browne, on Tuesday, accepted the submission of the defence and ruled that the proceedings against Luzette King, in connection with an incident at Argyle International Airport (AIA) on Jan. 30 should be stayed permanently as an abuse of power.

King, a 68-year-old opposition activist, was before the court on charges that on Jan. 30, at AIA, contrary to Section 27 (d) of the Immigration Act, she “did enter the state by air and did not present yourself in person to the nearest immigration officer as required by s. 10 (3)”.

She was further charged that on the same date and place, “upon arrival into the State of St. Vincent and the Grenadines, failed to declare anything contained in your baggage, or anything carried on you, or produce your baggage for examination to the nearest customs officer on duty at the said Argyle International Airport”.

A third charge was that on the same date and place, at AIA, “upon your arrival into the state of St. Vincent and the Grenadines, prevented the carrying out of a search for anything which is liable to be forfeited, detained, seized, or removed, by not presenting yourself to the Customs officer on duty at the said Argyle International Airport”.

After the incident, King, a St. Vincent and the Grenadines (SVG) citizen who was born in Curacao to Vincentian parents, was immediately deported to the United States, where she also has legal status.

The charges against her were brought after she returned one week later, on Feb. 6, to SVG from the United States.

The application to stay the proceedings permanently was made by King’s legal team, led by Kay Bacchus-Baptiste.

In Aug. 10 written submissions to the court, King’s legal team pointed out that a state witness had alleged that King had passed the immigration and customs before being brought back into the airport and deported.

The lawyers said that the immigration and customs officers had King in their ambit then but decided not to charge her. Rather, they concurred and assisted in having her removed from the country “without due process”.

And, Assistant Director of Public Prosecution Tammika Da Silva-Mc Kenzie in her response to the defence’s submission said that King was “prohibited” from proceeding to clear with Immigration and Customs.

“The delay in bringing the charges is significant, not only because of the length of time, but because of the intervening decision of the state to exact a punishment that could only be sanctioned by the court,” the legal team said.

They said that the “best remedy for the court is to distance the judicial system from the impugned conduct of the state”.

The lawyers said that the court was not being asked to discipline the state “but there cannot be a strong public interest in seeing the defendant prosecuted by the state for alleged offences where she was already punished as stipulated by the prosecutorial code of conduct of SVG”.

They said that King’s legal team was asking the court to “guard against the state as prosecuting authority believing that its conduct in relation to the defendant in the circumstances could be acceptable.

The legal team argued that the charges arose from the same incident that occurred on Jan. 30.

“The state had the option to charge the defendant at the material time for any alleged offence, but instead the state’s agents chose to put the defendant on an immediate flight out,” the legal team argued in its submission.

They said that King, a citizen of SVG “was deported from the state for no reason except the high-handed approach of the state”.

The team said that there was no statutory power enabling the state machinery at the airport to expel King as they did, and this was a violation of her constitutional right to personal liberty.

The Immigration Act sets out the procedure to be followed whenever it is desired for a prohibited immigration to leave SVG.

Furthermore, King, as a citizen of SVG, should not have been deported, “as no case was shown nor any court order issued for her expulsion, and thus a violation of the defendant’s right to freedom of movement.”

The team said that even if the state found some “erroneous cause” to deport King, she was denied her statutory right to appeal to the court on her intended removal from the jurisdiction by the state.

They said that on King’s return to SVG, the state machinery “arrested, unlawfully detained and charged” her with the offences they alleged occurred on the same day on which she was deported.

They said that the state agents who deported King had provided, in disclosure by the prosecution, statements on the same event that resulted in King’s deportation “and have confirmed the defendant’s arbitrary removal from the state,” the legal team said.

“Thus to bring charges against the defendant in relation to the same incident, after the state had exacted its proverbial ‘pound of flesh’ on an ever-vocal advocate against many state policies, is tantamount to an abuse of process.”

They said that the conduct of the state in the circumstances, “violated the basic human rights of the defendant; it was so wrong that it is an affront to the conscience of the court to allow proceedings brought against this background to proceed.”

King, her lawyers argued, was already subject to unsanctioned punishment by the state, which then instituted a criminal trial “to subsequently prosecute the defendant after she has endured such punishment as violation of her human right. The ends certainly cannot justify the means.”

In Aug. 30 submissions on behalf of the Crown, Da Silva-Mc Kenzie said that King had contravened the regulations enacted to safeguard the populace as a result of the COVID-19 pandemic.

She said that King’s claim that she was deported was unsupported, adding that the defendant had furnished no proof illustrating her deportation.

The Crown posited that King was not deported.

“… in fact, she never presented herself to the Immigration authorities for such a consideration to arise,” the assistant DPP reasoned.

Da Silva-Mc Kenzie said that inasmuch as ordinarily, in pre-COVID-19 times, the immigration Department would be the first authority to determine whether a person can enter SVG, this did not apply in King’s case.

King “never presented herself to the immigration department for such a determination to be made,” the prosecutor said.

She said that further to her non-compliance with the public health regulation put in place as a result of COVID-19, “instead of facing criminal sanction, and possibly exposing persons herein to contracting COVID-19 [King] was prohibited from proceeding to the clear with the immigration or Customs as per the authority vested in the Public Health officer for non-compliance with their stipulations”.

King’s lawyers responded to the Crown’s submission on Sept. 9, saying it is disingenuous to argue that King was not deported.

“One can take judicial notice of that,” said the legal team, and pointed the court to video and documentary evidence of this.

On the issue of king being “prohibited”, as the crown claimed from proceeding to immigration and customs, her legal team said:

“If the applicant never presented herself to immigration because she was prohibited and prevented from proceeding to clear with immigration and customs as per paragraph 6 of the respondent’s submission, why is she charged then? This is clear abuse and must be dismissed.”