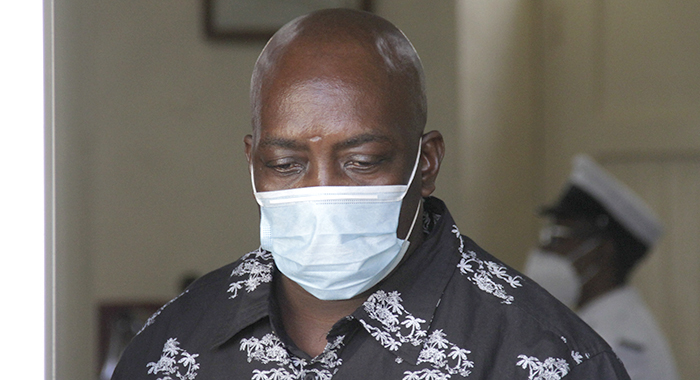 Anthony Charles leaves the court after his sentencing on Friday. (iWN photo)

The van driver who, on April 20, 2015, caused the death of a 4-year-old when his omnibus drove over her head as she was boarding, has been handed a two-year suspended prison sentence, ordered to pay EC$5,000, and barred from driving for 10 more years.

The sentence was handed down moments after the court heard from the child’s mother, Carol Quashie-Abbott, who is overseas receiving medical attention as a result of stress from the incident.

Quashie-Abbott and her daughter, McKayla Abbott, were commuting together and the mother had boarded the omnibus on Commercial Road in Georgetown, moments before her daughter, when tragedy struck.

According to the facts presented by Justice Cottle, the mother entered first and as the child was boarding, Charles drove off.

The conductor was partially outside and the door of the vehicle was still open when Charles drove off and the sliding door moved forward and struck the infant, causing her to fall.

Abbott and the conductor shouted at the driver to stop but Charles didn’t do so immediately. The left rear wheel of the van drove over the child, resulting in a severe head injury.

The child was taken to hospital in the van, but was pronounced dead a few moments later.

Police conducted an investigation and charged Charles, who initially pleaded not guilty, but changed his plea after receiving legal advice.

Charles was initially scheduled to be sentenced on Monday, but Justice Cottle adjourned it to today, as he wanted to clarify whether the conductor was inside the bus, as Charles had claimed.

In her comments to the court today, Quashie-Abbott said that the death of her daughter has impacted her a lot.

“… sometimes, when I am at home I will think about the laughter and everything and it is not easy going on without her.

“The pain that I feel, the memories of her, it’s not easy. I don’t know — thinking of her, I tell you, I feel a lot of pain, crying. Everything that happened just keeps on reflecting in my mind — her crying.”

The mother told the court that she especially remembers that her grandfather had told her that he had been thinking of the deceased child before he fell and later died.

“… it is a pain again that I feel,” Quashie-Abbott told the court.

“So in that 2015, I lost three of them in that same time and it is so much on me so I have to end up and go to the doctor. It’s only God alone who knows what I am going through.,” the woman said, adding that she had counselling from her pastor.

“… she (pastor) said just take everything to God; keep on praying and trust God that everything will be OK,” the mother said.

“That is why I am up here to get help concerning it. When I feel pain, nobody else feels the pain. So I just want to get justice for my daughter, please.”

In his sentencing remarks, Justice Cottle  noted that the Motor Vehicle and Road Traffic Act of St. Vincent and the Grenadines prescribes a maximum penalty of seven years on conviction for causing death by dangerous driving.

The judge noted the aims of sentencing — retribution, deterrence, prevention, and rehabilitation— adding that the court must also comply with the sentencing guidelines unless doing so will result in injustice.

“This prisoner failed to have proper regard for the child who was boarding the bus. This manner of driving created a significant risk of danger to her,” the judge said, adding that the sentencing guidelines suggest that his crime was at Level C, or lesser seriousness.

He established a starting point of 55% of the maximum sentence, or two years and six months in prison.

Justice Cottle said that the aggravating features of the offence were the failure of the prisoner to ensure the child was safe before driving off and his failure to react quickly enough to the alarm to stop the van in time.

The judge saw no mitigating feature of the offence, adding that while it was suggested that the fact that Charles had safely transported the mother in the past was a mitigating feature, the court did not agree.

The court found that the aggravating features outweighed the mitigating elements and, therefore, increased the sentence by one year.

Regarding the offender, the court found that mitigating on Charles’ behalf was the fact that he had cooperated with the police, assisted by transporting the child to hospital and had expressed remorse.

The court found no aggravating feature of the offender and, therefore, reduced the sentence by six months, to arrive at a notional sentence of three years.

For his guilty plea, Justice Cottle afforded Charles the full one-third discount of one year, noting that he had pleaded guilty at the first opportunity after receiving legal advice.

“This prisoner was the driver of a public service vehicle. Such drivers are expected to display a higher level of skill as compared to other drivers of private vehicles.”

The judge held that Charles drove extremely dangerously and didn’t allow for the child to board and be properly seated or for his conductor to get on board and close the door before driving off.

He said that before the sentencing guidelines came into effect, people who caused death by driving dangerously rarely received custodial guidelines.

He further noted that the court had heard from Quashie-Abbott, who was traumatised by the experience and still thinks of her daughter, mentally replaying the incident, causing her great anguish.

The judge pointed out that Quashie-Abbott had to seek medical attention and counselling from her pastor.

Justice Cottle noted that the mother had told the court that Charles had expressed no remorse on that day and had not spoken to her since and she had expressed hope that the driver would be jailed for the rest of his life.

Noting Charles’ age, Justice Cottle pointed out that the prisoner had been a conductor since he was 14, later becoming a driver and was familiar with minibus operations.

He noted that Charles had said that the conductor was seated in the van when the incident occurred.

“That, clearly, was not the case,” Justice Cottle said.

He noted that the police chief had suspended Charles’ driver’s permit since February 2019.

The judge imposed a sentence of imprisonment for two years and a fine of EC$5,000 to be within 90 days or one year imprisonment.

“I have wrestled with the issue of whether the sentence should be custodial or not,” Justice Cottle said, adding that the factor that played most importance in his mind was where the conductor of the van was when the child was about to board.

Justice Cottle suspended the two-year jail sentence for three years on condition that within that time Charles commits no further offence punishable more than six months.

The judge further barred Charles from holding a driving permit for 10 years from today, saying that he had considered barring the man from driving for the rest of his life.

“Mr. Charles, you will have to live for the rest of your life with what you have done,” Justice Cottle said.

Charles was represented by Counsel Duane Daniel while Maria Jackson-Richards appeared for the Crown.