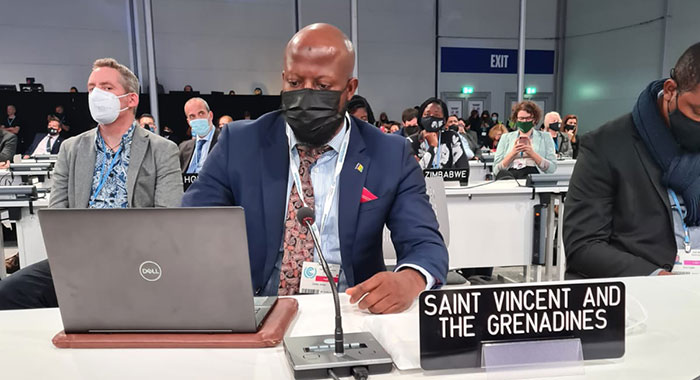 World leaders, negotiators and international institutions have been meeting for this year’s event, which runs Nov. 1-12, with the hope of agreeing on a comprehensive plan to avert a global climate crisis.

COP26 is being billed as the most important climate meeting since the Paris Agreement, an international treaty on climate change agreed among world leaders at the UN Climate Conference in 2015. This year’s conference aims to hold countries accountable to their commitment of substantially reducing global greenhouse gas emissions and to provide financing to developing countries to mitigate climate change.

Minister of Tourism, Civil Aviation, Sustainable Development and Culture, Carlos James, who holds the portfolio for climate change related matters, is leading a four-member delegation to the climate conference as part of SVG’s efforts to strengthen the position of the Alliance of Small Island States (AOSIS).

Following a strong and positive opening of the conference during the plenary session attended by Caribbean Community (Caricom) leaders. AOSIS negotiators and ministers prepared for an intense round of negotiations in an all-out effort to avert a climate crisis.

To reverse this pending geophysical crisis, James said, will require reducing current global emissions in half by 2030 and to net-zero by 2050 while demanding greater financial support for small island developing states (SIDS) in strengthening their resilience to climate impacts through the implementation of mitigation and adaptation measures.

James said the catastrophic effects brought on by climate change is a global emergency that goes beyond national borders and requires international cooperation and coordinated solutions at all levels.

He noted that the 20 largest economies of the world, the G20 group, are responsible for emitting nearly 80% of global carbon emissions while their Nationally Determined Contributions (NDCs) are well below what is required to ensure global temperatures remain at less than 1.5 degrees above pre-industrialisation levels.

“Despite being responsible for only 0.2% of global carbon emissions small island developing states (SIDS) and territories are on the frontline in terms of exposure to compounded risks and steadily deteriorating circumstances resulting from the impact of climate change,” James said.

The sustainable development minister cautioned that if action is not taken now, small island development states like SVG, will become unrecognisable due to the severe impact of climate change.

He noted that the scale of climate finance required to tackle these challenges presents a permanent strain on the economies of small states.

“A warmer planet will pose significant threats to Small Island Developing States … it means more frequent natural disasters, severe droughts, shortage of food and irreversible damage to our eco-systems, all of which threatens our very existence due to our vulnerability,” James said.