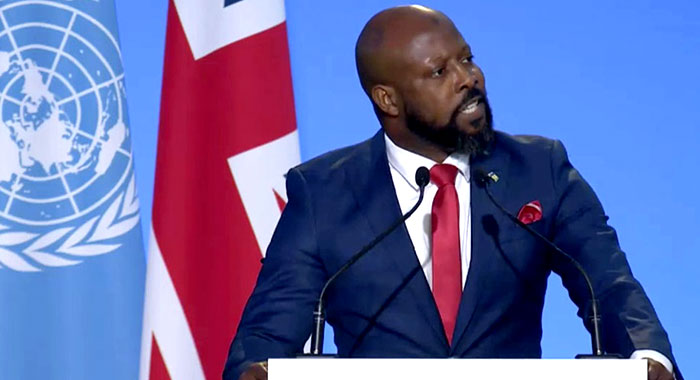 GLASGOW, Scotland (CMC) — St. Vincent and the Grenadines Tuesday questioned how long will aspirational declarations and diplomatic manoeuvring delay the concrete actions to ensure that the planet remains less that 1.5 degrees Celsius above pre-industrialisation levels.

“They will not bridge the gap between existing commitments and the 1.5 C pathway. We must accelerate the reduction of greenhouse gas emissions in this decisive decade, to achieve net zero by 2050,” James said.

He told the conference that this past year has been the most challenging period in SVG’ post-colonial history.

“We continue to grapple with the challenges precipitated by the COVID-19 pandemic, the devastation caused by the eruption of the La Soufriere volcano, and severe floods and landslides due to more extreme weather phenomena. These challenges underscore our intrinsic vulnerabilities and threaten our very existence.”

James warned that the failure to take the necessary steps required to avert this climate crisis is not only morally wrong but is intellectually dishonest.

“We strongly condemn the reckless endangerment of the 72 million people living in Small Island Developing States. To compromise on the required targets and measures is a death sentence for our people.”

He said that at the national level SVG has prioritised adaptation and mitigation actions.

“My country continues to do its part on the local front in our global fight against climate change including, inter alia, ongoing work on hydropower plants, a solar farm at the international airport and increasing the resilience of our water infrastructure as an archipelagic state.

“Further, on the international level, we seek for comprehensive solutions as a non-permanent member of the UN Security Council.

“With all our best efforts, however, we cannot do it alone. New and additional finance, technology transfer and capacity building support are required to ensure we can fully implement the Paris Agreement.”

James said that as a result, SVG welcomes the efforts of those developed countries that have signalled their intention to scale up finance pledges,  and is urging others to move swiftly to deliver on the outstanding US$100 billion per annum commitment.

“We call for definitive progress on tracking the delivery of these promised funds, as well as the establishment of a New Collective Quantified Goal on climate finance by 2023. Additionally, ensuring access to grant- based funding for mitigation and, particularly, adaptation actions in small island developing states is critically important.”

James said that it is a fallacy to think that a global crisis, like climate change can be tackled without every country fully committing to this cause.

He said that this fight requires the inclusive action and meaningful participation of everyone.

“We commend Taiwan’s efforts to legislate climate targets and they should be at the table for these discussions.

“The world is watching. COP 26 must be remembered for completing the Paris Rule book and ensuring the full and effective implementation of the Paris Agreement. Anything less will be deemed a failure. We cannot afford to squander decades of hard work. The stakes are too high and time is running out,” James added.