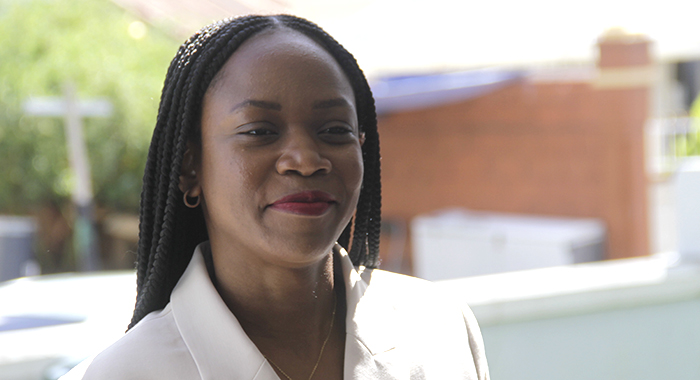 The trial of government senator, Ashelle Morgan and Assistant Director of Public Prosecutions, Karim Nelson, began today (Wednesday) at the Mesopotamia Magistrate’s Court, sitting at Calliaqua, with the testimony of a crime scene investigator who visited the scene almost eight weeks after the shooting.

Nelson is being tried on charges that on April 13, at Diamond Estate, he wounded Cornelius John, of Diamond, and also unlawfully discharged a firearm at him.

Morgan is alleged to have assaulted John at the same date and place.

John is to be tried on a charge that on the same date, also at Diamond Estate, he used threatening language at Morgan.

The trial  of Morgan and Nelson began at 10:13 a.m. and Director of Public Prosecution, Sejilla Mc Dowall rose and introduced the prosecutor, S. Stephen Brette, who is deputy DPP in St. Lucia.

Ronald Marks is representing Nelson and Duane Daniel is for Morgan.

Notably absent at the commencement of the trial was counsel Kay Bacchus-Baptiste, who holds a watching brief in the matter and represents John in the charge against him. Bacchus-Baptiste arrived at the court at 12:56 p.m. while John’s evidence in chief was far advanced, and told the court she was before the High Court, hence her tardiness.

As the trial began, the magistrate noted the option of having the two defendants tried separately or together.

Brette made an application for the accused to be tried together and there was no objection from the defence, paving the way for the trial to commence.

Mc Dowall then asked to be excused, saying that she had no further business before the court.

He said that in June 2018, he competed a crime scene investigation course, including photography and fingerprinting, from the Royal St. Vincent and the Grenadines Police Force (RSVGPF) at the Old Montrose Police Station, and in June 2019, he underwent additional training at the Regional Security System (RSS).

The officer said he has been practising as a crime scene investigator since his training.

The prosecutor asked that the court deem the witness an expert in crime scene investigation. The defence did not object.

Quammie told the court that he is currently attached to the Sexual Offences Unit and is based at the Questelles Police Station.

He said that in June, he held the same rank and was attached to the Calliaqua Police Station.

The witness said that on June 6, 2021, he was on duty at Calliaqua Police station when Corporal 858 Hoyte informed him of a report of threats, wounding and criminal assault which he was investigating.

Hoyte informed Quammie of his intention to revisit the scene at Diamond Estate, at John’s home.

Quammie said he took with him his photography kit, which includes his Canon digital camera and photography markers, which he later used to mark several areas at the crime scene and take photos.

He said that he and Hoyte left the station and on arrival at the scene, he (Quammie) met and spoke with John, who was in the presence of his lawyer — Bacchus-Baptiste.

Quammie said that John’s home is a two-storey unpainted concrete building with an unfinished upper floor, located 19 feet 9 inches to the left of the Diamond Estate Public Road.

John directed him further onto his property to the downstairs of his home to what appeared to be a porch, the officer said.

That area is located on the ground floor of the building.

“I observed that there was a single block standing upward at the sink area and to the left was a staircase consisting of two rows of steps that led to the inside of the house,” Quammie told the court.

He said that John pointed out three specific areas and told him something and the officer used photographic markers #10, #11 and #12 to mark those respective areas.

In keeping with the hearsay rule, Quammie was not permitted to say what John told him as the defendants were not present when the conversation took place.

The officer said that marker #10 is “an apparent concrete block”, #11 is situated to the left of #10, and #12 is located on the staircase leading to the inside of the house.

The officer said that John made several demonstrations to him and as a result of that and their conversation, he took several digital images of the marked areas and also of the entire scene and the surrounding area.

He said that he also took several measurements of the scene and took contemporaneous notes in his official crime scene investigations notebook.

The officer said that he had the notebook with him in court and that a statement that he tendered was written from those notes.

The officer obtained the court’s permission to refresh his memory by referring to the notes.

The officer said that page 6 of his notebook bears the measurements that he took at the scene.

He said that the dirt and grass pathway leading from John’s house to the Diamond Estate Public Road is 19 feet 9 inches. From marker #10 to the edge of the porch is 9 feet 10 inches.

The officer said that after processing the scene, he returned to the police station and downloaded the images from the SD card in the camera then burned the images to a non-rewritable disc.

The disc was placed in a disc holder and sealed with the official seal of the RSVGPF, the officer said.

He also signed the disc and labelled it ‘master copy’ and further copied the images to non-rewritable CDs and labelled them “working copies”.

Quammie told the court that the images are authentic and have not been edited by anyone and are true representations of what he saw through the lens of his camera.

He further told the court that on June 20, about 4:43 p.m. he and Hoyte returned to the scene where he (Quammie) met and spoke with John, who pointed out two areas at his property, which the officer marked with photographic markers #10 and #11.

Quammie said he then took several digital  photographic images  and later returned to the station, where the images were also burned to CDs, as had been done with the first set of images.

He said he handed over a copy to the investigator and kept the master in his possession as an exhibit.

Quammie said that he took an additional measurement — from marker #10 to #11 — which was 2 feet 2 inches, being an area  that John pointed out .

The defence did not object to the CDs being tendered as exhibits and the images were shown in court.

Quammie explained the images, saying that one was one of the photo shows where the complainant said he saw someone point a gun at him and another photo was of where John’s leg was when he was shot.

Quammie completed his evidence in chief at 11:30 a.m.

The defence counsel had no cross examination.

The trial continues at 2:30 p.m. with the cross examination of John.

(Correction: The initial version of this article said that the crime scene investigator initially visited the scene three weeks after the incident. The visit actually took place 54 days or seven weeks and five days after the shooting.)