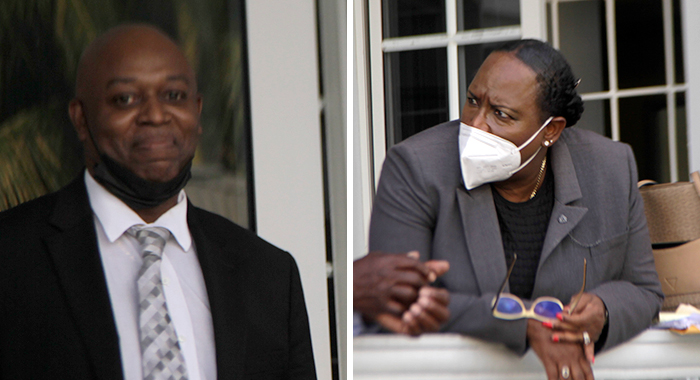 A counsel in the Morgan/Nelson trial, on Friday, told one his colleagues not to disrespect herself by saying that she is being “muzzled”.

“Only dogs are muzzled,” Duane Daniel, a defence lawyer in the matter, told Counsel Kay bacchus-Baptiste, who has a watching brief.

The exchange was the most heated to date among the lawyers involved in the case.

It came as the defence attempted to persuade the court to ignore the testimony of witness about alleged phone calls that one of the defendants had made reportedly made to the witness.

Government senator, Ashelle Morgan, a lawyer, and Assistant Director of Public Prosecution, Karim Nelson, are being tried in connection why the April 13 shooting, at Diamond of Cornelius John, a 63-year-old businessman.

John is to be tried on a charge that he used threatening language to Morgan.

On Friday, Counsel Ronald “Ronnie” Marks, who represents Morgan, tried to persuade the court to delete the evidence of John’s wife, Nicole John, regarding the contents of telephone calls between she and Morgan after the shooting.

The defence and the prosecutor, S. Stephen Brette, had also haggled about disclosure of statement relating to Mrs. John testimony.

During the earlier part of the protracted debated among prosecution and defence and the bench, Bacchus-Baptiste had risen “amicus” and suggest that the situation could be cured by the court ordering disclosure, rather than having Mrs. John’s evidence deleted from the record.

As Marks was presenting his argument to the court, Bacchus-Baptiste, as she had done from time to time during the trial, was making some comments.

Marks asked the court to instruct “the person with the watching brief to stop making comments across the bar table and disrupting counsel”.

His comments resulted in a heated exchange and Magistrate Bertie Pompey, who is presiding, reminded the lawyers, “Please. This is a court of law. I demand some respect.”

Bacchus-Baptiste stood to address the magistrate and Daniel, who is representing Nelson, rose and commented  that Bacchus-Baptiste has a watching brief and has no right to rise in the proceedings.

Bacchus-Baptiste said she can raise amicus.

“She has a dog in the fight. She has an interest in the outcome of these proceedings in relation to the client she serves. The respect that you (the magistrate) demand extends to her having nothing more than a watching brief,” Daniel said, later saying that Bacchus-Baptiste should “sit and be silent”.

“That is not the law,” Bacchus-Baptiste said, adding that  Daniel was “trying to muzzle”.

“I wish that she does not disrespect herself by referring to herself as being muzzled. Only dogs are muzzled.”

Bacchus-Baptiste said that Daniel was referring to her as a dog. However, Daniel denied that that was the case, saying that Bacchus-Baptiste had referred to an implement reserved for dog.

He further suggested that Bacchus-Baptiste, in light of her status in the matter, take her seat.

However, Bacchus-Baptiste pointed out that the magistrate was speaking to her.

“I cannot sit and respond to the magistrate,” she said.

Earlier in the trial, Daniel had referred to Bacchus-Baptiste as having a talking brief

The flare-up was extinguished just as quickly as it began and the hearing was soon after adjourned to Monday at 9 a.m.

4 replies on “Don’t call yourself a dog, lawyer tells colleague”