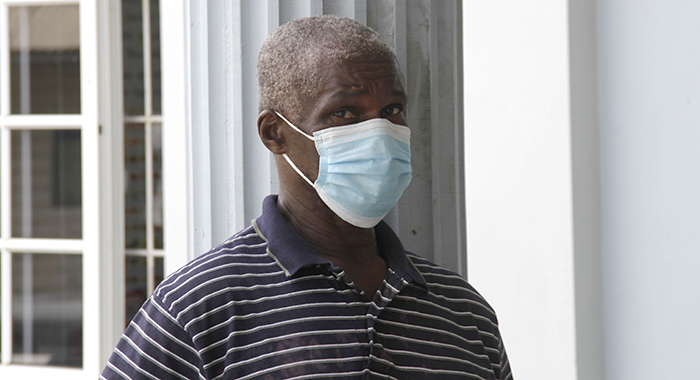 The virtual complainant, Cornelius John, as he awaited the commencement of the proceedings in Calliaqua on Thursday, Nov. 11, 2021. (iWN photo)

The prosecutor and a defence lawyer in the trial of government senator, Ashelle Morgan, and Assistant Director of Public Prosecution, Karim Nelson, on Thursday, haggled over the relevance of contents of the complainant divorce proceedings in 1993 — 28 years ago.

Nelson is being tried on charges that on April 13, at Diamond, he wounded Cornelius John, of Diamond, and unlawfully discharged a firearm at him.

Morgan is alleged to have used threatening words against John.

Magistrate Bertie Pompey is presiding over the trial which is taking place at the Mesopotamia Magistrate’s Court, sitting at Calliaqua.

John was the second witness called when the trial opened on Wednesday and his cross examination by Morgan’s lawyer, Duane Daniel, continued until the end of that day’s proceedings.

On Thursday, the hearing opened at 11:21 a.m. John was recalled to the stand 10 minutes later and Ronald “Ronnie” Marks, Morgan’s lawyer, began his cross-examining of her accuser.

Marks asked John about one of his neighbours and a court matter in which they are involved.

iWitness News will publish, after the trial, the details of the court matter as Pompey has ordered the media not to report on the “evidence” of the trial while it is still underway.

After our detailed reportage on Wednesday’s proceeding, the prosecution objected and found support in the defence, although the court cited no law on which the order was based.

When Marks asked John about the court matter involving him and his neighbour, the prosecutor, S. Stephen Brette, who is deputy director of public prosecution in St. Lucia, objected and asked that his objection be heard in the absence of the witness.

The court asked John to step outside and the witness left the dock at 11:34.

Brette then told the court that Marks was trying to bring evidence from the bar table.

“The witness is not on trial,” Brette said, noting that the trial is of Morgan and Nelson on allegations that they assaulted, threatened, and wounded John.

The prosecutor submitted that John’s character was not itself an issue.

“Especially the bad character of the witness,” the prosecutor further argued, saying that there is a particular application if the alleged bad character of a defendant to be raised in a trial.

“To try to bring that from the witness itself when he is not on trial is wrong in law,” Brette added and told the court there was no legislative, common law or case law authority that entitled Marks to do that.

The prosecutor asked that the court not allow the question.

But Marks said that when a defendant raises an issue of character of a witness, the law is clear on that.

“You lose your shield. So any evidence of Mr. Nelson’s bad character, the prosecution is at liberty to bring it. This man (John) has testified and it is not a matter of bad character but of credibility,” Marks said.

“The witness said he is not a violent man and the defence intends to lead evidence to contradict that,” the defence counsel argued.

He said that questions may be put to a witness in relation to any improper conduct of which he may be guilty in order to show that the witness should not be believed.

“Where is the conviction?” Brette said adding that Marks should have disclosed to the prosecution, if John had a conviction.

But Marks responded that it was the first time he was hearing that one needs a conviction to show bad character.

He told the court that there is an affidavit sworn by John where there are allegations regarding his first wife.

But the magistrate said that subsection 2 of the Evidence Act speaks to the accused.

“A person charged and called as a witness shall not be asked and if asked should not be required to answer…” Pompey said.

The prosecution told the court that the Evidence Act in St. Vincent and the Grenadines is deficient on the issue and he pointed to the law as practised in England.

“‘Of which the witness is guilty’,” the prosecution said, quoting the practice in England.

“Guilt comes with a conviction, not an allegation,’ Brette argued. “It says that the defence cannot bring it unless he can produce a conviction.

Marks argued that improper conduct does not have to be a conviction.

“If I pull down his pants in court, that is improper conduct,” Marks said, adding that that may also be a crime.

“The protection is for the defendant because the witness is on trial,” Marks further reasoned.

The magistrate said that in the interest of justice, he would allow the question.

But the prosecutor maintained that the question is improper and said if the court is minded, he would ask that the matter be stood down so the prosecution could get the case law.

Brette said it would take 15 to 20 minutes to do so, adding that the defence has not provided any authority to support its argument.

The court stood down at 11:45 for what was announced as a 15-minute recess.

When the trial resumed at 12:15, the magistrate announced the lunch break until 1:15 p.m.

The trial resumed at 1:17 p.m. and the prosecutor said that he had the case law and that it did confirm that “guilty” refers to a conviction.

Brette, however, said that there is a process in trying to elicit information from the witness and this was not followed and, therefore, the court should not permit the question.

Brette argued that the defence knew what their defence was before that stage of the trial, adding that the English law is applicable n SVG, where no processes and procedures are available in the jurisdiction.

The procedure is to make an application seven days in advance that bad character would be a defence, Brette said, adding that his submission is that the evidence should not be allowed.

Marks rose and told the court that he and the prosecutor disagree on whether being guilty of misconduct refers only to a conviction because the statute speaks to misconduct or alleged misconduct.

He further said that misconduct or alleged misconduct must also be of a similar nature to the conduct alleged in the present case.

The defence counsel, however, said that the matter is moot because the defence had found out that there is, in fact, a conviction against John for assaulting his ex-wife.

There were some further exchanges between the bar and the bench about the interpretation of certain statutes and case law.

The prosecution maintained that the court should preclude the conviction and not allow questions on it.

“The law is the law and has to be followed for both the prosecution and defence,” Brette said.

But Marks said that it should be for prosecution to disclose things such as criminal conviction.

“The conviction is not in dispute,” he said, adding that the defence has a right to question John on any conduct or alleged misconduct.

The magistrate allowed the question about the case involving John and his neighbour.

The prosecutor asked that the record show his strong objection ”in case any further decision that may be taken with regard to this matter”.

Brette also asked the court to record that notwithstanding what the defence said, no proper procedure was followed.

Marks said that what Brette was arguing does not apply in this jurisdiction.

The magistrate said that he would allow the defence to question John on his past conduct.

He further said that it is only fair that the prosecution disclose any convictions that John has.

Brette asked Marks to cite the authority on which he was basing his argument and Marks referred to Section 4 of Rehabilitation of Offenders Act.

The prosecutor, after considering the section, pointed out that the penalty for the offence for which John was convicted was a fine and an order for one year.

Brette said that Section 4 of the Rehabilitation of Offenders Act says that a person who is rehabilitated shall be treated for all purposes as a person not convicted.

But Marks responded that regardless of how the court rules on that point, “it is the intention of the defence to cross examine in relation to the learning that the court has provided”.

He noted that the court had said that any witness can be cross examined on their misconduct or alleged misconduct.

Marks summarised for the court his clients defence.

He added: “So it is absolute to the defendant’s defence that this evidence be adduced because it is the very crux of that defence — if we get to that stage,” Marks said.

He said a fundamental element of the defendant’s right is that he cannot be prevented from putting this defence.

But the prosecutor said he knows it is not a judge and jury trial and for the defence to stand and say those things is unacceptable because the defendant has to run defence based on evidence.

“The law is clear that this spent conviction cannot be referred to the court,” Brette said.

But Marks asked that the court ask the prosecutor to read Section 7(4) of the Rehabilitation of Offenders Act.

“What the defence is asking the court to do is to disobey the legislation of St. Vincent and the Grenadines.

The prosecutor sat down and appeared to be reading the law.

Marks said that the section clearly places on the court the decision on whether to cross examine a spent conviction.

He reiterated that it would be “unfair, in the circumstances, for the tribunal to disallow this evidence.

“And I am really disappointed that counsel is cherry picking the act like that. I directed him to a specific section that is unambiguous, clear…”

Pompey, however, noted that the provisions in the Rehabilitation of Offenders Act and the Evidence Act are similar.

He said that witnesses shall not be asked and if asked, shall not be required to answer but noted the discretion of the court.

“I would allow the question. This is a discretion,” the magistrate said.

The prosecutor then said he had read section 7(4) and had no difficulty with the question being permitted.