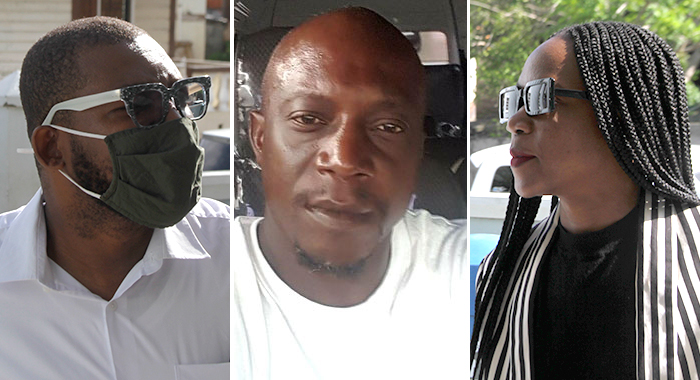 Magistrate Bertie Pompey, today, Wednesday, denied an application by the prosecution to issue summons for a final witness for the Crown in the trial of a prosecutor  Karim Nelson and Senator Ashelle Morgan in connection with the shooting of a 63-year-old man at his Diamond Estate home on April 13.

The trial is taking place at Mesopotamia Magistrate’s Court, sitting at Calliaqua, and the prosecutor, S. Stephen Brette made the application to summon the witness after the court returned from the locus in quo — “scene of the event” — at Diamond, on the sixth day of what was intended to be a three-day trial.

Brette told the court that the prosecution would like to call one more witness — Vernon Adams.

As a police officer was calling Adams’ name outside the courtroom, Brette told the court that he was instructed that efforts were made to get Adams to attend the trial.

At this point, the officer who was calling for Adams outside the courtroom, in keeping with the law, reported to the court that there was no appearance of Adams.

Brette then told the court that his instructions were that Adams was called via telephone and the police were unable to contact him. The police also went to his home this morning and Adams was not there.

The prosecutor applied for summons for the witness.

Adams is alleged to have been present when Cornelius John was shot when three persons visited his home on April 13, sometime around 6:30 p.m.

Morgan, a lawyer, government senator and deputy speaker of the house of Assembly, is charged with assaulting John. She is being tried alongside Karim Nelson, an assistant director of public production, who is alleged to have wounded John and unlawfully discharged a firearm at him.

When the defence was called upon to respond to Brette’s application to summon a final witness, Duane Daniel, who is representing Morgan, told the court that he would rather Marks do so “because the police might have to come and arrest me”.

Ronald “Ronnie” Marks, who is Nelson’s counsel, told the court that the trial was “an extremely frustrating exercise”. He also noted that three days were allocated for the trial and Pompey commented that they were into the sixth day.

Marks said that he had made “a humanitarian plea” on Tuesday that the matter be dealt with expeditiously.

He said that Adams gave a witness statement that the prosecution has had since April. To go this morning to try to get a witness was “ridiculous,” Marks told the court.

“I am trying to do like Mr. Daniel and calm myself and not show my frustration,” Marks said, adding that he and Daniel have each been out of their chambers since the trial began last week Wednesday, Nov. 10.

“Your court, Your Honour, has come to a standstill…; the Director of Public Prosecutions’ office is without their [assistant] DPP; the Parliament is without their deputy speaker and senator.”

He said that the prosecution had been given ample time to get its house in order.

“It is for them to prove their case and to do so in a timely manner and not delay justice and thereby deny it,” Marks said.

He said that although his tone is calmer, “it does not truly express how much we vehemently oppose any sort of further delay in this matter”.

“You have been more than generous in this matter and it is time now, we submit, that the court put its foot down and demand that the prosecution get on with their work and deliver justice…” Marks said.

And, the magistrate noted that the matter had been adjourned “on several occasions” and six days into the trial the prosecution was applying for a summons.

“I am going to deny that request. Move on,” Pompey said. “If he wanted to be here, he would be here.”

The proseccutor asked the magistrate to state the reason for denying the application.

Pompey said the prosecution had had ample time to have the witness attend the court.

He said that the prosecutor did not offer any reason why the witness was not at court. The magistrate further stated that he would not sit and wait on the witness and allow the court process to be abused.

Daniel said that the proper procedure would have been to warn all witnesses for the first, or at least the second, day.

He said that consequent upon any indication that there was no contact with the witnesses, the summonses could have been issued all in advance.

However, Brette again rose and told the court that he had not gotten the reason why the court had denied the application.

“I said that already. It’s been six days,” Pompey said and asked if the court would be held up for one person.

Brette then told the court that “having been denied the opportunity to call Vernon Adams, the prosecutor is constrained to close its case.

After the prosecution closed its case, the defence made no case submissions arguing that the defendants should not be made to answer the charge because of a lack of evidence, or the poor quality of the evidence, where it existed.

Pompey is expected to rule on that submission tomorrow, Thursday, at 9:30 a.m.