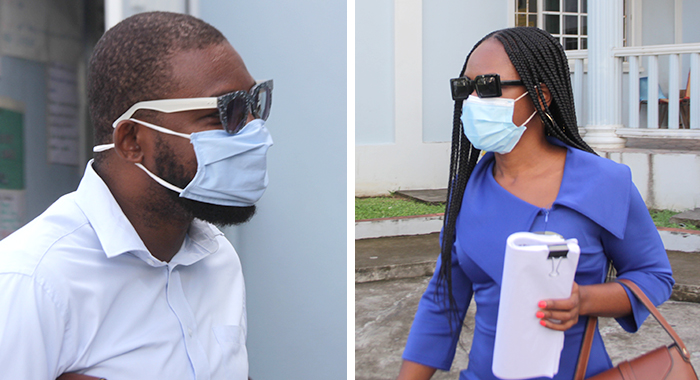 Magistrate Bertie Pompey said today (Wednesday) that he will rule tomorrow on no case submissions by defence counsel in the trial of a senator and a prosecutor accusing of shooting and assaulting a man in Diamond in April.

Defence counsel Duane and Ronald “Ronnie” Marks made the applications today, after the Mesopotamia Magistrate’s Court returned from a visit to the locus in quo — a Latin phrase meaning “scene of the event”.

After six days of hearing evidence, the lawyers are asking the court to rule that the prosecution has not made out a case for which their clients should be made to answer.

Karim Nelson, an assistant director of public prosecution  stands accused of wounding Cornelius John, 63, of Diamond, by shooting him in the left leg, and unlawfully discharging a firearm at him.

Morgan, a lawyer and government senator, is accused of assaulting John.

The offences were allegedly committed on April 13, at Diamond, the same date and place that John is alleged to have used threatening language to Morgan — for which he is to be tried.

After iWitness News’ reportage on Day 1 of the trial, Brette, complained about the detailed nature of the reports and asked the presiding magistrate, Bertie Pompey, to order the media not to report on the evidence in the case. Brette cited no law in support of his application, which the defence counsel supported.

iWitness News is, therefore, delaying its reportage on the evidence in the case.

The prosecutor, S. Stephen Brette, had first notified the court on Friday — Day 3 of the trial — of his intention to make an application that the court visit the scene.

On Tuesday, Pompey decided to visit the scene after an application from the prosecution on Day 5 of what was intended to be a two-day trial.

The defence strongly objected to the application and the prosecutor withdrew it, but later renewed it after putting some questions to firearms expert, Station Sergeant Julian Cain, using as references photos that had been tendered in evidence.

When he initially made the application on Tuesday for the court to visit the scene, Brette cited the legal authority on which he was making the application.

At this point, Marks, who is representing Nelson, asked the court if the prosecution had closed its case.

However, Brette pointed out to the court that the learning is that the prosecution does not have to close its case before the application is made because viewing the scene is part and parcel of the case.

The prosecutor then informed the court of the witnesses that he intends to have visit the scene.

But Daniel, who is representing Morgan, told the court that the remit and purpose of the visit, as well as the questions to be posed, are to be disclosed and discussed so as to determine whether the visit would assist the court.

The defence counsel said that it was his understanding that Police Constable 933, Elroy Quammie, a crime scene investigator, was called as the first witness in the trial case, to obviate the need for an application to visit the scene.

“The purpose was to place the scene in the court’s mind,” he said, adding that he would be grateful for the prosecutor to indicate to the court evidence he seeks to elicit at the scene from each witness that has not been elicited in examine-in-chief and cross-examination.

The lawyer said a visit to the alleged scene of an alleged offence is not to elicit evidence that should have already been adduced during evidence-in-chief and cross examination.

“It is not a second opportunity for the prosecution to get a second bite of the cherry,” Marks said.

“The question is whether there is something that is not clear in the court’s mind,” he further stated, adding that otherwise, the court “should not go through the inconvenience of visiting” the scene.

He said that the court had heard evidence at length and had viewed over 30 photographs.

But Brette asserted that Marks always comes with “principles and assertions and no authority”. The prosecutor went on to read to the court a legal authority that said that a visit to the locus can be supplemental to plans or photographs seen during the trial.

He said that one witness had spoken about seeing something from one direction and the court was able to see that in the photograph, but not the reverse view.

Brette said that the witness also spoke about a certain sound. He said the prosecution intends to have an expert who testified in the case to replicate the action to see if the sound could be heard from where the witness was.

Daniel, however, maintained that the prosecution has a right to invite the court to visit the scene but that the court is not obliged to accept the invitation.

He said that if the prosecutor was saying that the purpose of the visit was to attempt to replicate the sound, he (Daniel) would not include a particular witness because of an element of that witness’ testimony.

He, however, conceded that Brette may have an argument regarding standing where the witness said the witness was at a particular time.
“Not all invitations have or are bound to be accepted,” Daniel, however, maintained.

Marks said that the question that the court has to answer is whether it sees any  utility in visiting the scene.

Daniel reasoned that the question that can be asked is whether they would be able to create those exact situations and circumstances.

“The prejudice is that everybody would be there, specifically listening for something,” Daniel argued.

But the prosecutor said that is incorrect, adding that while the court would know the purpose of the visit, the witnesses would not.

Brette said that is why the witnesses — all of whom have already testified — were asked to leave the court during the legal arguments.

But the magistrate said that he had seen the photos and noted that they had been taken closer to the time of the alleged offence than the time of trial.

Pompey said that the only benefit he can get from visiting the scene is to ascertain the distances between places, as this is not always clear in photographs.

The magistrate said that the court was clear about the location of another item mentioned in the trial.

The prosecutor, however, said that he did not mention that item in his application to visit the scene.

Pompey responded that he has mentioned many times that a photograph is worth a thousand words. He noted that in the trial the court has the benefit of overhead projection of photos.

At this point, Daniel offered to consult his notes, and asked the court to do the same, to see if there was any challenge to the witness saying that they had heard the sound in question.

Marks, however, maintained that the visit would not be helpful because none of the witnesses said that they would see where a particular person was and this went into evidence unchallenged.

Daniel, however, said he  could not say for certain it was not challenged and that he would have to check his notes.

At this point, the magistrate noted that it was 2:31 p.m. and said that he would visit the locus.

Daniel, again told the court that the court would have to note the focus of the visit.

At this point the prosecutor noted that the defence had said that it was not contending what the witness heard.

Daniel  said that the defence was saying that they had not cross-examined the witness on hearing the sound.

“I am not saying she is telling the truth,” Daniel said.

However, the prosecutor said that instead of going to the scene, he would use the defence’s concession “in whatever way applicable to the matter”.

The magistrate said he knows that the prosecutor — who was specially retained to represent the Crown in the trial — is at a disadvantage because the court and the defence are familiar with the area even if they might not know exactly where.

Daniel, however, said that the prosecutor must have gone to the scene and Brette — who is a former detective — did not comment, but chuckled.

Brette then told the court that since they are not going to the scene he would like to make an application to recall Cain, the firearms expert.

The defence did not object, though Marks said he did not see why this was necessary.

“You would see it,” the prosecutor said.

At 2:44 a.m., Cain was recalled and the magistrate reminded him that he was still on oath.

However, Daniel said that, procedurally, Cain should affirm again because he had already completed his evidence and had been excused before being recalled.

After Cain was reaffirmed anew, Brette asked that Cain be shown a particular photo and the prosecutor obtained the court’s court’s permission for the senior police officer to approach the area where the image was projected overhead.

Brette pointed out certain areas on the images and asked Cain a question and Marks objected to the question.

However, Brette noted to the court that Marks had earlier asked Cain certain questions about what might happen if a firearm is held in various ways that the lawyer had demonstrated.

Marks said that in light of that he was withdrawing the question.

Daniel, however, said that in order for Cain to answer the prosecutor’s question, the firearms expert would have to have certain presuppositions, including one that the lawyer particularly identified.

But the prosecutor again noted that the defence was allowed to demonstrate certain things and ask certain questions of the witness.

Daniel withdrew his objection but Marks said that he did not think it was permissible to ask a witness a question about something that is not in evidence.

“Any such question would call for speculation…” he said and named the exact thing about which the witness would have to speculate.

“The witnesses cannot intelligently comment on that,” Marks said and referring to the witness, said, “Poor Mr. Cain.”

Marks withdrew his objection and the prosecutor asked the question again.

The expert answered the question and Daniel in a hushed voice, commented, “Thank you. Tie yourself up.”

But the prosecutor put another question to Cain and received a similar answer.

He then said that if the court could not get an appreciation from that photo, he was asking that Cain be shown another or for the court to go to the scene

“You know what, we will go and visit the scene,” the magistrate said.

Daniel then rose and the magistrate said that while he would hear the counsel, he had already made his decision.

Daniel said that “the obfuscation was by the prosecution”.

The magistrate, however, maintained that the court would visit the scene.

Daniel noted that Cain had not completed in evidence-in-chief and had not been crossed-examined.

The prosecutor, however, thanked the court for its decision and said that the witness could be cross-examined after the visit to the scene

“What is the difficulty? I want to have a clear picture. I am not getting it here,” the magistrate said.

Marks then rose and reiterated a point that Daniel had raised that morning — that it should have been a three-day trial.

“We are now into day five, going into day six. We will have to try to move as expeditiously from here on because we have been out of our offices for a long time,” Marks said, adding that there is a big pile of papers on his desk.

“I have to give you especially the benefit of the doubt. There are a lot of what I call collateral issues that were raised and argued at length.”

He, however, agreed with counsel that the trial should have lasted less than three days.