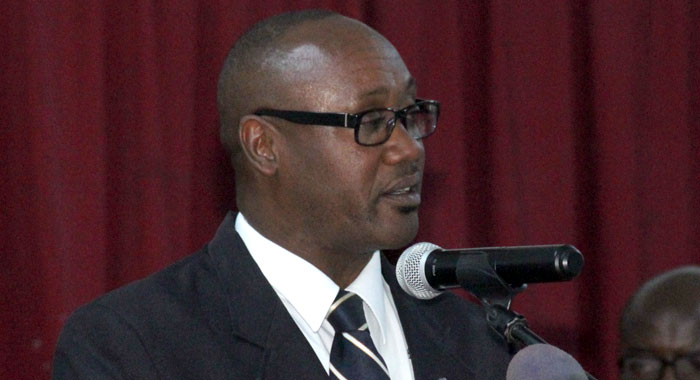 Chairman of the Police Welfare Association, Station Sergeant Brenton Smith has urged his colleagues not to use force against people  “who have decided to stand up for their constitutional rights” to not be vaccinated against COVID-19.

As of today (Friday) police officers, and a large number of other government workers are expected to provide proof of COVID-19 vaccination if they are to remain on the job.

“Today may be the eve of whether some of us, as police officers, continue in this job,” Smith said in a Facebook Live broadcast Thursday night.

“I wish to, first of all, commend those officers who have decided to stick it through against tyrannical behaviours…” he said.

“Those who have decided to stand up and fight back to maintain their basic human rights of freedom, this is a fundamental right given to us by God and you should never allow any man to take that away from you.

“To those who were not so strong and decided to take the vaccine because of the pressure, I understand you and while it is sad, I do understand. I love you no less,” he said.

Government workers who have not been exempted from the jab on medical or religious grounds have 10 consecutive days off the job before they are considered to have forfeited their posts.

“This fight is not going to go down easily. I am calling, tonight, on all of the police officers, whether you are vaccinated or not — because this is not a fight against the vaccinated or unvaccinated.

“This is a fight, this is a constitutional matter of freedom of expression, freedom of conscience, freedom of consent. So I am simply saying this tonight. We can do this, we will do it. So when persons are bullying you to get vaccinated, yes, you are vaccinated, you maintain your job, you have save it. Fine. But tell them this after: you made me do things against my will. I am gonna stand now for justice and freedom. That is what is important. And it is important that you, too, are counted.”

Smith urged his vaccinated colleagues “to stand with those of us who have made the decision to fight for our freedom and against tyranny.

“Stand with us and be counted. Do not carry out anyone’s mandate to beat up or to apply force to those who have decided to stand up for their constitutional rights. Stand with us because today might be the vaccine. Tomorrow  might be something else,” he said.

“I’ve had reports of officers being told continuously by senior officers to be vaccinated or to resign or retire. I’m saying to you, officers, do not allow anyone to force you to resign or retire. Many of us have loans, families to take care of. We don’t know where our next dollar will be coming from. But we have decided not to give up on our constitutional rights.

Police Commissioner Colin John told iWitness News that as of Thursday, over 1,000 officers had taken a COVID-19 vaccine and over 50% of the constabulary was fully vaccinated

“We have about 82% who took at least one dose,” he said, adding that at the Port, 52 of 53 officers had taken the jab and the other had been given a temporary exemption

Smith noted that the police chief had said that about 1,000 police officers are vaccinated.

“People would not know this has caused tremendous strain and pressure on me as the chairman of the Police Welfare Association. I had to answer to so many persons needing to comfort as to what is going to happen, what they are going to do. I had to proceed on sick leave because of pain in my chest. I was fatigued, mentally and otherwise,” Smith said.

He said that Prime Minister Ralph Gonsalves, who is also Minister of National Security, recently said that the police force can operate with 800 police officers.

He said that the prime minister’s statement was “very irresponsible, to say the least.

“In international standards, there is about one police officer for every 100 people in a country. So that should give you the scope of things,” Smith said, noting that there are about 110,000 people in St. Vincent and the Grenadines

“You can hardly get proper working conditions, a proper leave system, yet [800] police [officers] can do the job? These are some of the questions we have to ask ourselves. Are you taking national security seriously? Well, from my experience, I doubt.”

Smith said he was happy to see a number of church leaders speaking out against mandatory vaccination.

“The church ought to be counted now. You have  gotten a lot of licks in the past, and perhaps rightly so. But this is an opportune time for you to bring back the people of St. Vincent and the Grenadines together because you have a full responsibility, an important one, to assist the people of this country,” he said.

Smith said that the pandemic has affected the contributions that churches receive toward their work. He said that the church will experience even greater financial strain if people lose their jobs because they do not take a COVID-19 jab.

“And you know the Lord’s temple will need finances as well if you are to really preach and spread the gospel,” Smith said.