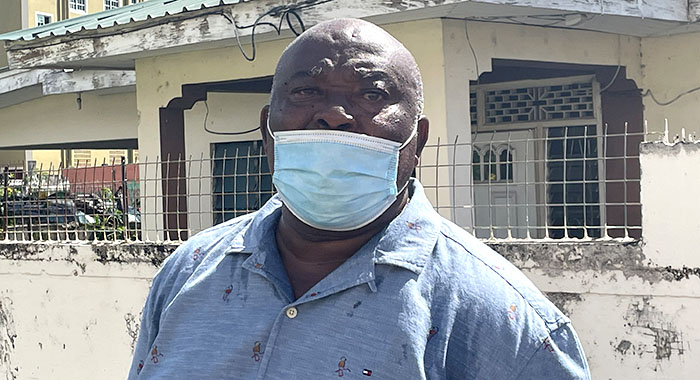 Carlyle Ryan, a retired assistant commissioner of police and former head of the Traffic Branch, was fined for dangerous driving. (iWN photo)

A retired assistant commissioner of police who once headed the Traffic Department was, on Monday, convicted of driving without due care and attention and ordered to pay EC$1,200 or spend 12 weeks in prison.

Chief Magistrate Rechanne Browne, sitting at the Serious Offences Court, in Kingstown, gave Carlyle Ryan, of Campden Park, until noon to pay the fine, if he is to avoid jail time.

Ryan told the court he would appeal.

The charge stemmed from an incident in Kingstown on June 19, 2021, when a vehicle that Ryan was driving struck Alyssa Da Silva as she was crossing Hillsboro Street, between the Police Headquarters and the Central Market.

Ryan failed to convince the court to uphold a no case submission and was put on his defence.

In his defence, he said that he retired from the police force after 33 years, which included five years as head of the Traffic Branch.

Ryan said that on the date in question, sometime between 7:15 and 7:30 p.m., he was driving his vehicle, a black Toyota Rav4, registration number P5332, west along Bay Street.

He said that on approaching the Police Headquarters, the whole area was clear, with no pedestrians or vehicles in the area. He turned onto Hillsboro Street.

As I made the right turn, concentrating on the road ahead, when I got 12-15 feet away, I heard a banging on the right rear door of the vehicle,” Ryan told the court.

He said that he stopped immediately and looked in the right wing mirror and saw a black object on the ground.

“The first thought that came to me was that a dog had run under the vehicle,” Ryan said.

The defendant told the court that when he opened the door of the vehicle to exit it, a young man who said he was Da Silva’s boyfriend held the doors and slammed it against his foot, which was already outside the vehicle.

He said, ‘You ain’t see you [expletive] knock down my girlfriend?’ Ryan said, adding, “I had already cleared the crossing.

He said that someone summoned the police and PC Young and a female police officer attended the scene.

Young had a can of spray paint and spoke to Ryan and Da Silva and used the paint to mark areas that they pointed out, Ryan told the court.

“At that point, she did not point out to the officer that she was struck by the crossing. She pointed out to him 15 feet where he was struck. The police marked those areas, including the areas where she said she was struck, and also two blood spots,” Ryan said.

During cross examination by Sergeant 44 Jones, Ryan said that on the night of the incident, Young marked certain spots with spray paint, but that is easily erased.

He said he has been a licensed driver for about 46 years and agreed with the prosecutor that visibility along Bay Street is at least 75 feet.

Ryan said it was more on the night of the accident, as the road was clear.

Ryan said that he did not have a busy day in Kingstown as he is retired. He, however, said it was his second trip into the city that day.

He denied he had been hanging out or drinking whiskey, saying that he had come to Kingstown to clear his post box.

“I don’t hang out, my brother. I hardly drink a beer. I don’t drink strong drinks. I might have a beer or two on Friday or Saturday. I go country once in a while, spend a weekend with my people.”

Ryan denied that he was listening to radio, using his cellphone or paying attention to a man sitting on a cannon on the street corner at the time of the accident.

Jones put it to Ryan that he was not driving his vehicle in a manner expected of a prudent and competent driver.

He denied this, saying that he drives so carefully that people often accuse him of crawling. Ryan told the court that he adheres to the speed limit in towns and villages.

“If your eyes were so focused on the road, where did the pedestrian come from?” the prosecutor asked.

“I believe they did not attempt to cross, she turned onto Hillsboro Corner, stepped off the crossing and walked into the vehicle.”

The prosecutor asked Ryan when was the last time he went to the doctor to check his eyes,

“My eyes are good,” the defendant responded.

Regarding the footage that the prosecution has presented as part of its case, Ryan said:

He told the court that he had two witnesses but was not going to bother himself to call them to testify.

In handing down her ruling, the chief magistrate noted that the evidence in the case included electronic evidence in the form of the footage and circumstantial evidence.

“We saw the parties crossing the road, step off the sidewalk onto the road and were pretty much halfway across the road,” Browne said, adding that the male individual jumped back, and a bag and a meal that they were carrying fell onto the road.

“If she was in the middle of the road, there is no evidence that she stepped off the crossing. And having been clearly firmly advanced on the pedestrian crossing when the vehicle turned, at no instance would the court find that she is the cause,” the magistrate said and found Ryan guilty.

Ryan, who had no antecedents, declined to mitigate on his own behalf.