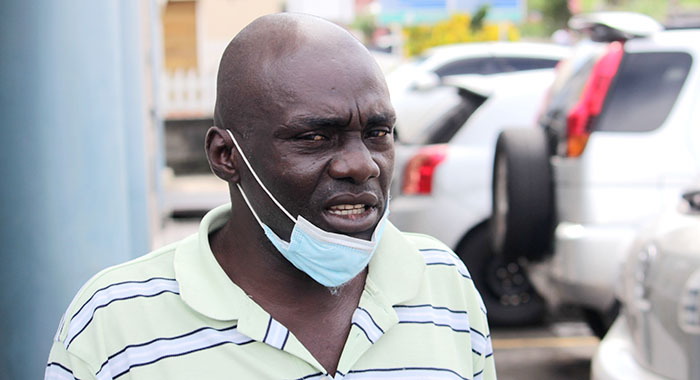 Edwin Caine, aka “Black South”, was jailed for 28 months for his crime. (iWN photo)

A habitual thief who wrapped a stolen 55” television in a bed sheet in an attempt to hide his crime has been jailed for 28 months.

Chief Magistrate Rechanne Browne handed down the sentence on Edwin “Black South” Caine, on Monday, at the Serious Offences Court, in Kingstown.

Caine pleaded guilty to a charge that on Nov. 4, at Arnos Vale, he entered the dwelling house of Modesto Joseph, of Arnos Vale, as a trespasser and stole one black 55” Samsung smart television, valued at US$1,000, one black WAHL trimming machine set, valued at US$40, one black Samsung cellular phone, valued at EC$300, and a number of other items, total value US$1,095 and EC$362 in cash, Modesto’s property.

The facts of the case, as presented by Sergeant Renrick Cato, are that detective Police Constable 540 Sam of the Criminal Investigation Department was investigating a report of burglary at BRAGSA Building in Arnos Vale, from which a number of items, including one green and white jar of Mattock peanut butter and one black and silver Ocean microwave oven were stolen.

During the investigation, the microwave oven was found in a shallow hole behind Caine’s house in Arnos Vale.

On Nov. 4, about 12:15 p.m., police received information that Caine was seen walking along the public road in Arnos Vale, carrying a black television and a backpack.

As a result, Sam and other officers went in search of Caine and apprehended him.

He had EC$350 in his right front pocket.

The backpack contained a number of items, including a jar of Matouk peanut butter, a white-handled knife, a hammer, one cutlass, a blue flashlight, one black and silver WAHL trimming machine, one black Samsung cellular phone, one bottle of Vaseline body lotion, and a black Angle 3 Bluetooth speaker.

Sam cautioned and arrested Caine but the defendant said nothing.

The police later invited Samantha Toussaint, of BRAGSA, to visit the police station and she identified the peanut butter as the one stolen from her office.

On Nov. 8, Joseph reported to the police, a burglary at his home and the police showed him the items recovered from Caine, which Joseph identified as his.

Later that day, police recovered the 55” television at an abandoned house in Arnos Vale and Joseph identified the television as his.

Cato made an application that the court forfeit the money, as Caine had been unable to give any credible explanation about its source.

‘Nobody cried out and said they missed money’

In mitigation, Caine told the court that he has a 12-year-old daughter who is in Form 2 at the North Union Secondary School, and a 10-year-old son who is “kinda miserable and giving his grandmother a little trouble”.

The defendant said he would “like to be there for him.”

Caine told the court that he had worked for the money and was keeping it to pay his rent.

“Nobody cried out and said they missed money,” he told the court, saying that he would give his children the money to give to his “other woman” to pay the rent.

“So, when the children come you will like to give them the money to give to the other woman to pay the rent?” Browne asked the defendant, who answered in the affirmative.

Caine asked the court to order him to pay compensation, saying that the complainant had gotten back all the stolen items.
He asked the court to “go easy on the sentence” and complained about prison authorities seeing people making the same mistake repeatedly but do not teach them a skill.

He said that rather than placing him in the carpentry shop, the prison authorities are sending him to trim bush.

“You have given me two reasons why you shouldn’t be turning back to the old things. What are those reasons?” the chief magistrate asked.

However, Caine hesitated and the magistrate told him that his children should have been his first priority.

“If that was the truth, the son and the daughter would have been in the forefront,” she said, adding that Caine should be doing better so that they would not follow the same path.

Browne said she had doubts about the children that Caine spoke about because given the ages he had told the court, it is curious how he was able to father them, given the sentences that had been imposed on him over the years.

She asked Cato if he had any representation on sentencing.

The prosecutor told the court that in the High Court, burglary attracts a maximum sentence of 14 years in prison, and seven years at the magisterial level.

He noted that Caine has convictions for offences of a similar nature, and noted the circumstances in which the police had cracked the case.

Cato said the complainant is 59 years old and had secured his property and gone to work.

He said that it was Prison Officer Tash, who knows Caine from his stints behind bars, who saw him with the television on his head.

The prosecutor said that Caine made sure that he greeted Tash.

“Fortunately, Tash had experience with the defendant in prison and reported it to the police,” Cato said, adding that the prison officer kept Caine in sight until the police arrived.

He said that the police were able to get footage showing the defendant coming from Joseph’s home.

“At first he didn’t give any statement but when he heard about the footage and it was shown to him, he gave a statement,” Cato said.

“It is high time people must feel comfortable securing their premises and going to work or leave and do what they want to. I do not know when he really and truly plans to stop this kind of behaviour.”

The prosecutor asked the court to sentence Caine based on his previous conviction, the court’s powers of sentencing, and to send a strong message to burglars and would-be burglars.

Cato asked Caine when he was last released from prison and the defendant said 2017.

‘A person’s home is their palace’

“A person’s home is their palace. They should feel comfortable going and being there and not having to suffer emotional trauma as a result of burglary,” Browne said.

“Some people suffer from all kinds of sleep issues and have to get counselling after. This (your home) is supposed to be your sanctuary.”

Browne said it is immaterial that the value of the items stolen in burglaries might, sometimes, seem nominal.

“People have to work to get the items and they are valued by them for their personal use, use by family members,” she said, adding that in some instances, the items have great sentimental value.

She noted that 10 of Caine’s 13 convictions are for the same type of offence — an extremely aggravating feature.

She further told Caine that he was not last released from prison in 2017, as he was sentenced in 2018 to 24 months in prison.

“Look. You remember now. So don’t practise to deceive,” she said on seeing Caine’s reaction.

Caine said he had forgotten, “how I was focusing on this case”.

“So, you’re just out [of prison]; the same type of action,” Browne said.

After outlining the aggravating and mitigating features of the case, she sentenced him to 28 months imprisonment and ordered the forfeiture of the EC$350 and restitution of the items recovered.

After the sentence was passed, Caine told the court that he wanted to publicly commend Prison Officer Tash for the role he played in Caine’s apprehension.

The chief magistrate thanked the prison officer as well as the detective for their work.

“And, Mr. Caine, I will implore you to do better; try better,” Browne said.

2 replies on “Thief wraps up stolen 55” TV in bedsheet”