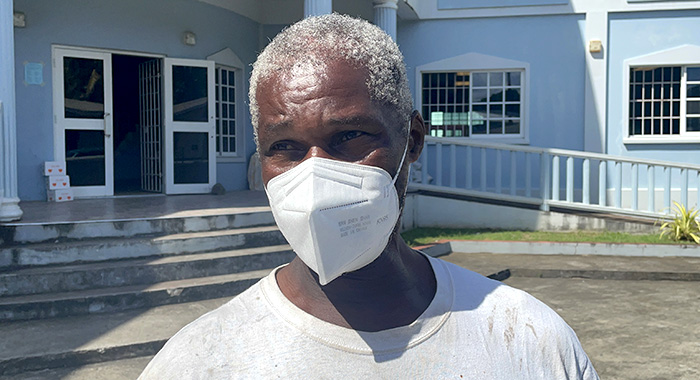 Cornelius John outsdide the court in Calliaqua, after the charge against him was dismissed today, Friday, Nov. 26, 2021. (iWN photo)

The case against Diamond Estate resident Cornelius John, 63, who was shot at his home on April 13, was dismissed moments ago at the Biabou Magistrate’s Court, sitting in Calliaqua.

John was charged that on April 13, at Diamond Estate, he used threatening language to Ashelle Morgan, a lawyer, government senator and deputy speaker of the House of Assembly.

The matter against John was dismissed, without going to trial, just over a week after Morgan was freed, after a six-day trial, on a charge that she assaulted John by pointing a gun at him at his home on April 13.

John was not in court when his case was called at 10:29 a.m. and Director of Public Prosecution, Sejilla McDowall, told the court that she had had a conversation with the investigator, detective Corporal Henry Hoyte, who indicated that John was on his way.

The DPP said that Hoyte had further told her that John was at his business place when he was informed about the sitting.

She said that the detective had further indicated that the defendant was on his way to court, having gone to Biabou, instead of Calliaqua.

John walked into the courtroom about a minute after Magistrate Bertie Pompey stood the matter down.

When the matter was recalled at 10:38 a.m., the DPP told the court that the complainant was not in court and that the prosecution had received certain information from Hoyte.

The detective then took the stand and told the court, under oath, that he had a telephone conversation with Morgan on Tuesday, Nov. 23, in respect of the court matter.

“She said that she is requesting no further evidence. She is not coming to court; she will be out of the country. She requests no further action,” Hoyte told the court.

“Case dismissed,” Pompey siad, and John walked out of the courtroom.

He said he felt “blessed of the Lord” but had been looking forward to testifying in the matter.

John said he was informed about the matter Friday morning.

“About 9:45, they called me and say the matter was going to be called. I was doing some work so I just pick up — I first went to Biabou so I thought was Biabou the case gonna be called so I went to Biabou and wasn’t there so I had to hustle and come back down here. I didn’t have anytime to get together different from this.”

In a trial that ran from Nov. 10 to 18, Morgan was tried along with Karim Nelson, an assistant director of public prosecution, who was accused of unlawfully and maliciously wounding John by shooting him in the left leg.

Nelson was also charged that he unlawfully discharged a firearm at him at Diamond Estate on April 13.

Morgan and Nelson were acquitted when Pompey upheld no case submissions by their lawyers, after six days of hearing evidence.