PM says funerals like one in S. Rivers could be COVID super spreaders 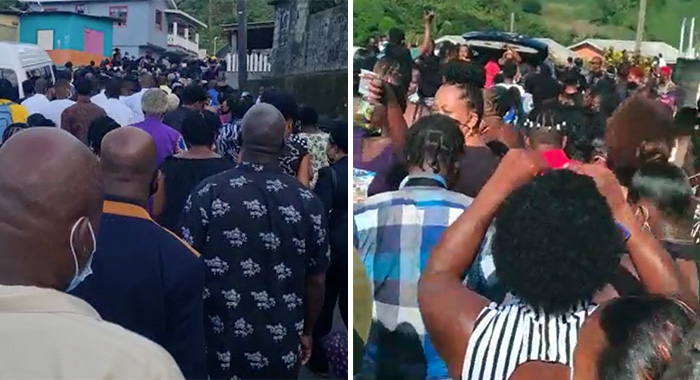 Scenes from the funeral procession in South Rivers on Sunday.

Prime Minister Ralph Gonsalves has commented on the funeral in his constituency last Sunday, which was attended by a large number of people, in contravention of the COVID-19 protocols.

Social media videos show what appears to be hundreds of people in the funeral procession in South Rivers, a community in North Central Windward, which the prime minister represents in Parliament.

Speaking on the state-owned NBC Radio on his weekly Wednesday programme, Gonsalves said that he had decided not to attend in Georgetown last weekend the funeral of a very popular woman.

The church at which the ceremony was to be held was small and the chief medical officer advised him not to go, the prime minister said.

“… because you didn’t have the — as I was advised, Montgomery Daniel went and he told me he thought it was good for me not to have gone to it because of the disregard by a number of persons, for COVID — even not wearing the mask,” the prime minister said.

“I’m talking at a time, not the common, ordinary variety of COVID. It is dangerous, but the more deadly Gamma and Delta strains and with Omicron in the news.

“We have to be very careful and the pastors have to help, and more than that, people themselves have to help.”

He said he, however, went to the funeral, in South Rivers, of Smokey Wilkinson, who died of a heart attack in his bathroom on the farm programme in Canada.

The prime minister said that Wilkinson was very popular and his funeral was held at the playing field in South Rivers.
“And I must say the family and the church, with pastor Willis Hackshaw, they had the service organised very well in the park.”

He said that mourners could not enter unless they were masked and had to sanitise their hands and temperatures were taken at the gate to the playing field.

The stage was set a distance away, the amplified system was good and there were lots of chairs, reasonably spaced under the tent, the prime minister said.

“I would have liked, for instance, to stay to go to the graveside because I am very close to the family. But … the last hymn before the benediction, I left, because I don’t want to add to the number who would be going down to the cemetery …” the prime minister said, adding that the procession had to travel to the Three Rivers area for the burial.

“And the reports are that the crowd was huge, the number of persons… Fortunately, the  overwhelming number of persons, I was told, was wearing the mask and South Rivers has a higher percentage of vaccinated persons than the vaccinated average in the country, as a whole.

“So all that is mitigating but we have to be careful because these events can become super spreading events.”

He said he knows that this is an issue that the cabinet secretary and the family of former prime minister, Sir James, who died on Nov. 23  would have uppermost in their minds as his state funeral is planned.

“… because Sir James was very  strong on this matter when he was alive — in fact, the last policy issue, big policy issue, on the issue of  vaccination, he was 100% in line with what the government is doing, with the frontline and strategic workers. In fact, he had called for this months before we had done it…

“But I just want to urge against — and I am asking the Cristian community, I am urging the police, I am asking the mourners, all of us, because we are in a new and dangerous situation with COVID and we have been in this situation since the proliferation of these more deadly variants.

He said that of the 74 deaths in SVG, all are unvaccinated and 98% of the people hospitalised were unvaccinated.
“These are the facts which are before us. You don’t have  to go to Timbuktu or China or Alaska, or New York, or San Francisco, or Buenos Aires to pull statistics. It’s in front of you.”

Gonsalves said that the government’s decision to shift the time for funerals from afternoon-evening to mid-morning until mid-afternoon is just one part of dealing with the issue.

“Even if the family and church, as was the case in South Rivers, observe the protocol, those who could not get into the park because of the stricture, were just waiting until the casket came out an on the way to the cemetery and then that is where you can have super-spreading event. And we have to be extremely careful.”

The prime minister said he understands funeral traditions “but we have to be so, so careful. And I’m just asking persons to bear this in mind”.

He said that in the case of the funeral in Mt Bentick that he opted not to attend, he called the family and explained the reason why he was not attending.

One reply on “PM says funerals like one in S. Rivers could be COVID super spreaders”