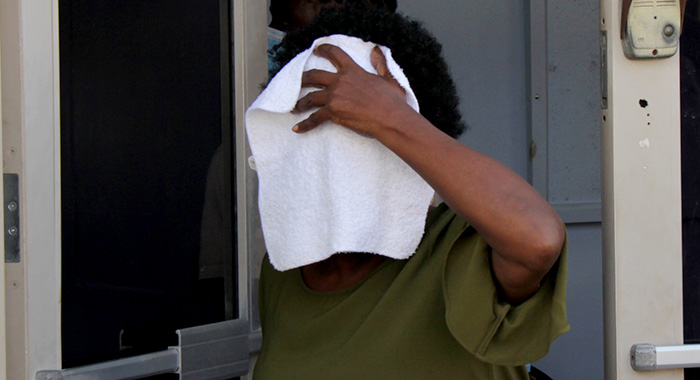 Naomi Nero uses a rag to hide her face as she leaves the Kingstown Magistrate’s Court on Monday, Dec. 6, 2021. (iWN photo)

A woman was, on Monday, ordered to repay EC$450 in cash that she stole in a purse that she snatched from another woman’s handbag in a store in Kingstown on Nov. 26.

Senior Magistrate Rickie Burnett further bonded the woman, Naomi Nero, 56, of Rockies, for one year in the sum of EC$1,500 or six months in prison.

Nero’s brother, who also attended the sitting at the Kingstown Magistrate’s Court, paid the compensation forthwith, eliminating the need for the court to impose an alternative sentence on the defendant, who also goes by the name Angella Thomas.

According to the facts presented by Prosecutor Corporal Corlene Samuel, on Nov. 26, the complainant, Nerissa Francois, of Rose Bank, went to Kingstown with her family and made purchases at several stores.

She later went to Jax Enterprises Limited and made a purchase and put her purse into her handbag.

As Francois was walking along an aisle in the store, an employee informed her that her handbag was open.

When Francois checked, she discovered that her brown purse was missing from the bag.

She went to the security officer at the store and they reviewed the footage, which showed Nero removing Francois’ purse from her bag.

The matter was reported to the police and PC 1022 Toby conducted an investigation, which led to the defendant.

On Dec. 3, police met Nero with the purse. She gave a statement, under caution, admitting to the offence.

The contents of the purse, namely EC$450, a national ID card and a card issued by the Fisheries Department, were not recovered.

“She was using the purse as if it was hers. She got rid of the other items,” the prosecutor told the court.

Samuel further told the court that Nero has previous convictions, which, though spent, might be of interest to the court.

In mitigation, the defendant told the court that she is the mother of six children, the youngest of whom is 25, but none of them live with her.

She said she worked at Grand View Hotel for five years but was laid off in 2017, and also worked at Haddon Hotel

The court asked Francois, who also attended the hearing, about her circumstances and learned that she is mother of four children, the youngest of whom is 1 year old.

“You understand that? She is not working. But in her purse she had $450 to take care of herself and her children and all that money that was in the purse. That money was taken by you.”

“You all speak as if this is fun,” the magistrate told Nero, who said that it was “not funny” and noted that she had told the court that she was sorry.

Nero said that it was not the first time that she was convicted of theft, adding, “But I can explain myself.”

“You can explain yourself but I want to see the movie first,” Burnett said, referring to the overhead projection equipment that court staff was setting up to show the footage of Nero stealing the purse.

The magistrate told Nero that these are different times.

“You commit a crime and it can be shown all over. We are not in ancient times. Modern times,” he said, referring to the surveillance system that had recorded her committing the crime.

Nero told the court that she had thrown away Francois’ national and fisheries identification cards.

“Throw it away; a criminal mind. Fisheries card as well — gone,” Burnett commented.

By this time, Nero’s brother had entered the court, as the magistrate ordered and was standing close to her near the dock.

The brother told the court that he had EC$450 to repay Francois.

“That’s the first thing I want. Her $450 to give her back. Take it out. Pay it right away,” Burnett ordered.

When the court inquired, Nero’s brother said that the money was his, which he had worked for.

“You need to stop it. Look at how you have been living your life. Went into Jax store, maybe to shop. The lady’s purse is exposed, that’s the most you can do?”

After handing down his sentence, Burnett told the defendant:

“Ms. Nero, you are a 56-year-old woman with children. This is not the first time in your life that you have been convicted for theft. So it means that you are not learning anything, madam. What is wrong with you? What is the matter with you, madam? Is this how you want to live your life?”

“No, my honour,” Nero responded.

“Then stop it,” the magistrate said.