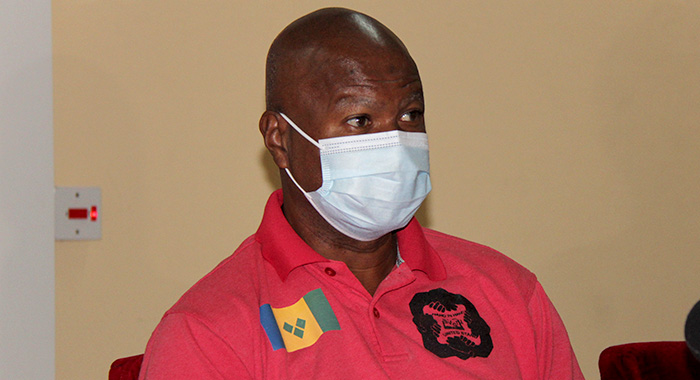 President of the SVG Teachers’Union, Oswald Robinson at the press conference on Wednesday, Dec. 8, 2021. (iWN photo)

The St. Vincent and the Grenadines Teachers’ Union says it is hoping for a strong showing at its picket in Kingstown, tomorrow (Friday) even as it acknowledged that state forces have undermined its industrial actions in the past.

“Well, that’s a very good question and a very good observation, because we know it happened, it has happened recently. … you can’t give up hope. The leadership of the Teachers’ Union is not daunted, we are not discouraged,” the union’s president, Oswald Robinson told a press conference on Wednesday.

The union plans to hold pickets at the Vegetable Market in Kingstown and Union Island, and the administrative building in Canouan and Bequia from 9:30 a.m.

It follows two days of strike on Tuesday and Wednesday, which the union has presented as a success, even as the government has said that the teachers who were expected to be at school were present.

Speaking about the planned picket in Kingstown, Robinson said that demonstrators will “surround the vegetable market” without interfering with the flow of traffic.

He promised a peaceful protest, adding that the union expects that church leaders will open the event with prayers and singing “and enjoy ourselves and have fun.

“But at the same time, we would send a clear message to the government of St. Vincent and the Grenadines.”

He said that the union had applied to the police for permission to use amplified sound during the activity.

No permission is needed to hold the picket, as this is a right enshrined in the trade union law, Robinson said.

“And if there’s any attempt to stop this picket, we will picket because if you want the picket to stop, then you have to get rid of that wicked bill and the wickedness that you have well orchestrated, to execute upon the nation.

“ It’s not only teachers, because if teachers have no money for the salaries in December, it’s going to affect teachers being able to send their children to school, to provide for the rest of the family,” Robinson said.

A law passed by Cabinet mandating COVID-19 vaccines for teachers and other “frontline” workers came into effect on Nov. 19, and a 10-day grace period expired last Friday, Dec. 3.

Workers for whom vaccines are required who have not taken the jab or secured a medical or religious exemption are deemed to have abandoned their jobs.

“How are they going to pay their bills to VINLEC, Water Authority, and financial obligations, which they have?” Robinson told the press conference.

Regarding the unwillingness of teachers to join their union on the picket line on previous occasions, Robinson said:

“Human beings you’re dealing with. Sometimes, you could change your mind within a matter of seconds. But we are hoping that this one is going to work. Because you can’t tell me your job is being threatened, you’re not getting exemptions — and I did mention about the multiplying effect, where people are dependent on you for support, financially and otherwise.”

He said that there was a 10 percentage point increase, taking to 60% the number of teachers who participated in the strike on Wednesday.

“What happened [on Tuesday was that] there were some schools that had already given the parents the commitment, they were going to do the test and they didn’t really want to break  such a commitment.”

He urged parents whose children’s teachers are affected by the mandate to join the picket.

The union boss noted that teachers are like second parents to students and some of the teachers affected by the mandate have taught parents and their children.

“… and you want to tell me, you know this teacher taught your [child], even might have taught you in school, having done so many years and that teacher, because the teacher doesn’t have a vaccination record to show, you’re going to sit back and relax?

“This is the time you have to come out. Come with … your students; come with our children on the line in solidarity. It’s just part of being my brother’s keeper. Because when you put the teachers out of a job, what’s gonna happen? The unemployment rates will go up, you want the unemployment rate to go up? You want us to go deeper into poverty? Those are the things people have to look at — the bigger picture,” Robinson said.