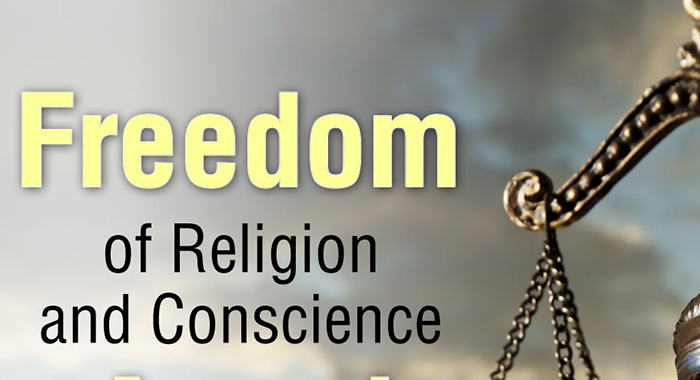 The Thusia Seventh-day Adventist Church says that the Constitution of St. Vincent and the Grenadines does not require a cleric’s signature or feedback from a church to establish a person’s religious beliefs.

Anesia Baptiste, a member of the church, told a recent press briefing that the form that government workers must complete when seeking exemption, on religious grounds, from mandatory COVID-19 vaccination, asks for information about the applicant’s religious leader, and period of membership in the religious organisation.

“Section 9 of the Constitution of SVG guarantees protection of freedom of conscience of the individual, based on their personal conscience, thoughts, belief and religion. It neither requires membership in a religious organisation nor a religious body and religious leader’s affirmation, by a stamped letter outlining a doctrinal position, in order for the individual to be assured protection,” Baptiste siad in a letter accompanying the exemption applications of members of the TSDAC.

She told the press conference that the  letter explained why the church “did not find applicable” the section of the form called “‘other information’, which required things like the pastor’s name or the leader of the religious organisation’s name, their title.

“It required things, like, say, how long the member had been a member, whether they were in good standing or not, and that was defined on the form by the government. It required to know the status of the religious organisation, whether it was incorporated, whether it was registered with the state, and all these things. And it also required a stamp from the religious organisation and so on. We did not fill out those parts of the form, we put that they were not applicable…”

She said that her church does not allow “the veracity of our beliefs to be determined by the critical analysis of anyone.

“These are our conscientious beliefs from God’s revelations of truths to us personally, through His holy word, the Bible. These are indeed our beliefs and there is ample evidence of this in our public discourse made over a period of time, on our teachings and practices,” Baptiste said in the letter.

Baptiste said the application of members of the church “are based on our inalienable/God-given right to religious liberty as protected in Section 9 of the Constitution of St. Vincent and the Grenadines”.

The “other information” section of the form was left blank also because in the Thusia SDA Church, “our head or leader is Jesus Christ,” Baptiste said.

“We have several elders in each church and the church in SVG has two elders, so qualified by gifts of the Spirit and not bearing any title or designation; we refer to each other as brother and sister.”

The letter said that the requirement to know the date of membership and if the member is in “good standing”, is “outside of the purview of any state official.

“It is neither within any state authority nor the authority of any religious organisation, to judge the conscience of an individual, whose conscience is worked upon by the Holy Spirit, at any time, to join or change their religion according to the scriptures…,” the letter said.

The letter said that the freedom to change one’s religion is protected under section 9 of the Constitution of SVG “and this protection of freedom of conscience does not require the length of time of the change of one’s religion, the quality of the practice of their religion, nor the judgement of the state and religious organisation, of the quality of the change, in order to determine its guarantee.”

“In other words, the Constitution doesn’t say let’s see if he or she is in good standing to determine if their protection of freedom of conscience should be guaranteed. No. It doesn’t say that. It  doesn’t either ask, ‘How long you are a member?’ It simply says you have the freedom to change your religion.”

She said in the letter that the requirement to know the official status of our church, whether it is incorporated into the state by law, registered by law, recognised by the state  — “whatever that may mean” — and established in the state, is not a condition of the Constitution to guarantee protection of freedom of conscience under section 9.

“Therefore, you will see that those requirements on that form are unconstitutional, they are illegal. And they are against biblical principles,” Baptiste said.