Child, 4, dies after cupboard falls on him at Lewis Punnett Home 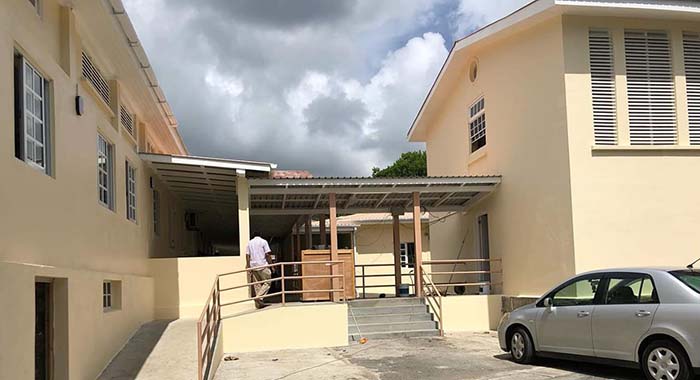 A 4-year-old boy died on Monday after a cupboard fell on him at the Lewis Punnett Home, a state-run live-in facility for geriatric patients and other persons with severe physical disabilities.

Tameka Caine, 24, of Calder, told iWitness News on Tuesday that the deceased is her son, Kenson Caine — her only child.

She said that Kenson’s father and paternal grandmother both work at Lewis Punnett Home, which is located in Stoney Ground.

She said that the child attends a preschool nearby and, therefore, either his father or grandmother would pick him up after school.

Caine said that Kenson’s grandmother called her around 7 p.m. Monday, telling her to go to the Accident and Emergency Ward of the Milton Cato Memorial Hospital.

She said that when she got there, she met one of the child’s aunts holding his body in her arms.

“He wasn’t breathing or anything. His mouth was open and his eyes closed,” the mother told iWitness News.

Caine said she took Kenson to school Monday morning but is unsure whether it was his father or grandmother who picked him up after.

She, however, said that his father called her around 6 p.m. and she spoke to the child via phone.

The mother was later told that Kenson’s  grandmother met him under a fallen cupboard in an area near to some bathrooms.

Speculations are that the child might have gone to the bathroom and the cupboard, which multiple sources have told iWitness News was known to be shaky, fell on the child, resulting in fatal injuries.

After the grandmother found the injured child, she had to seek out his father’s help to lift the cupboard.

The child father, along with a staff nurse transported him to the Milton Cato Memorial Hospital, located about a quarter mile away.

Caine told iWitness News that she visited Lewis Punnet Home on Tuesday to see the area when the incident occurred.

“I feel like I lost my life. That’s how I feel right now. I don’t feel like I’m alive today,” the mother said.

Meanwhile, Cuthbert Knights, permanent secretary in the Ministry of Health, confirmed the incident to iWitness News, on Tuesday, but declined to comment further at this time.

Knights said that he had received a report on the incident but was awaiting the completion of the investigation.

“So, I am not averse to speaking to you at all. I am aware of it but we are just doing the investigation. When that is finished, I can always have a conversation with you,” the senior public servant told iWitness News.

The Lewis Punnet Home is temporarily relocated at Stoney Ground as the government renovates its location in Glen.

One reply on “Child, 4, dies after cupboard falls on him at Lewis Punnett Home”