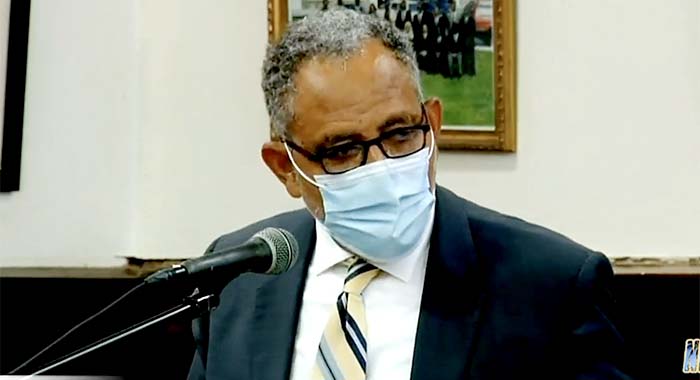 Leader of the Opposition, Godwin Friday has accused the government of an “old trick” of presenting a large budget “and not specifically indicating how it’s going to be funded”.

On Tuesday, Parliament approved Estimates of Revenue and Expenditure for 2022, amounting to EC$1.32 billion — a 9.6% increase over the approved budget for 2021.

This means that the government is yet unsure of how it will raise EC$265.4 million of the fiscal package.

“We come to this honourable house every year with essentially the same overall structural problem with the Estimates,” Friday told lawmakers.

“And when we raise this issue, members on the other side, they say, ‘Well, you said that last year and you say the year before’, as if to say if you have a problem and you raise the matter and it’s not addressed, that you should just forget about it.”

The opposition leader said he would further address the issue during the Budget Debate, scheduled to begin on Jan. 3, 2022.

“The matter that we have here is basically the old trick of creating a large budget and not specifically indicating how it’s going to be funded.

“And we raised this all the time, because if you’re honest in the presentation of various programmes that the government intends to implement, various sources of revenue that they intend to tap into, then we need to be able to say exactly where it’s coming from. “

The opposition leader said that the budget has to balance, adding, “No self respecting minister of finance could come to this honourable house and say we’re going to spend EC$10, but we only have five.”

In order to balance the budget, the government inflates the “Other Receipts” category of the budget, he said.

He noted that the government has to meet its bills and that the estimates are for current revenue of EC$677.5 million but current expenditure is estimated at EC$627 million.

“So, as the minister said, you have a deficit on the current account of EC$49.5 million, or thereabouts,” Friday said, noting that the amount does not take into account the national debt.

“Because we still have to pay the debt. And this is the point [that former leader of the opposition] Mr. [Arnhim] Eustace has made over the years, we have made here repeatedly, back in the time when ‘Other Receipts’ was something like EC$35 or EC$40 million. Now, it’s EC$265 million — one of the largest categories of funding in the budget. And every time we raise it, it’s dismissed as though it’s … a minor matter, you don’t have to explain this, we don’t have to account for it, we don’t have to tell anybody how are we going to get that money or if we don’t get it what is the consequence — who’s going to suffer in this budget.

“I mean, do we have two realities here, one that’s on paper that everybody can see and the other that operates in the Ministry of Finance, where you’re chopping and changing to meet the realities of the actual expenditure that can be made?”

Friday said it is either the government raises the money needed to finance the budget  or somebody is going to have to go without.

“And I want the minister to explain the raising of the money, I hope we can raise the money. This economy can do with a boost. People are feeling pain. They need hope. They don’t need mirages. They need honesty so that they know what they’re facing going forward,” the opposition leader told Parliament.