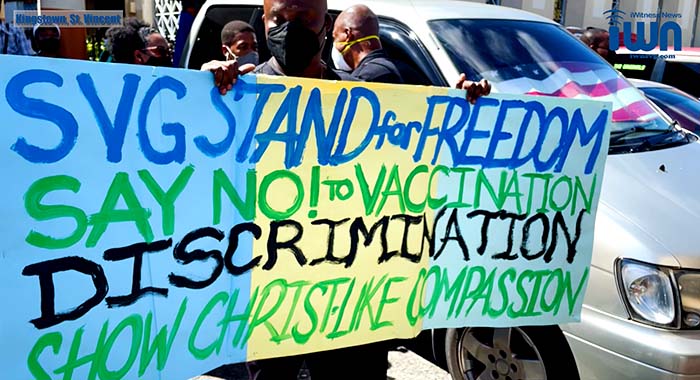 A pastor has described as “an unethical, ungodly and wicked mandate” the law in St. Vincent and the Grenadines that requires COVID-19 vaccines for “frontline” workers for whom vaccination is required.

The government has passed a law requiring COVID-19 vaccines for a wide cross-section of public sector workers, if they are to remain in their jobs.

The law provided for a 10-day grace period that expired on Dec. 3, and workers who are yet to take the jab are at risk of losing their job, with some having already received dismissal letters.

Last Friday, the Teachers’ Union held a demonstration in Kingstown as it continues to show its opposition to the mandate.

Among those who participated in the demonstration was the Reverend Kelron Harry, pastor of the Arnos Vale Church of the Nazarene.

“Well, I am  primarily here to stand with and support the teachers,” Harry, who is superintendent of the Windward Island District of the Church of the Nazarene, told iWitness News.

“Because what is happening, I believe, is creating a great division in our nation. It is causing persons who would normally stand with each other to, literally with a gun to their head, stand against one another.

“There is what I may term a medical apartheid being created by this mandatory vaccination. And I really don’t know how far I would go. But I believe we need to stand now because soon we  might end up to the bottom of a very, very slippery slope that we may not be able to recover from,” Harry told iWitness News.

“Democracy is important; justice is at the heart of God and there is no way I can support a mandate that says that if you are unwilling, because of your personal conviction and conscience to take a vaccine into your own body, that you should be fired and your accrued benefits should be taken away from you.

“There is no way I can support that. It pains my heart to see persons twisting themselves into pretzels to try to justify such an action. There is no way — no child of God, no believer in Biblical principle, can support such a mandate.”

“But what is critical is that we understand that when it comes to medicine and vaccination, we  don’t support the mandatory implementation. As such, we believe that it should always be a personal choice, a personal decision. We are not here to oppose the vaccine in any way, we are here to make it clear that a  mandate for a vaccination should be opposed, because it should be based on an individual’s choice, not with a gun to your head.”

iWitness News noted that it is not often that religious leaders in St. Vincent and the Grenadines participate in public demonstrations.

In 2019, many Christian clerics participated in a rally in Kingstown in opposition to a legal challenge to the nation’s buggery laws. The courts are yet to hear that matter.

iWitness News noted that unlike in 2019, not many religious leaders have come out in support of people who have chosen not to get vaccinated against COVID-19.

Harry said he has participated in two public demonstrations, the one in 2019, and last Friday’s.

“Now, this one is different because when we opposed the change of the buggery laws, those in authority were opposing also. But now, those who are in authority are for an unethical, ungodly and wicked mandate…”

He said that sometimes members of the church “feel a little threatened, we feel a little timid to oppose things that those who are in authority or the government support.

“But I believe that anyone who is a Christian can say that , ‘This is my party, I support the government’, can say anything like that and say, ‘But, you are wrong on this issue.’

“And I believe that is where sometimes the leaders in the church have a little problem that we find it hard to go against the national leaders and the party we support. But, believe me, at the end of it, it’s better I stand on the side of God…

“So, I would like to encourage leaders and pastors to always be willing to stand on the side of God and I will not think that pastors are not here because they are evil in any way. But I think that all of us cannot be here. So I stand and represent them.”

Asked about the alternative to mandatory vaccination, Harry said that he saw a letter written to teachers saying that they are not to make contact with the students because unvaccinated teachers pose a threat to the health of the children.

“I think that’s a terrible lie. I think it is damaging to our nation and to our children because we could be teaching them something very wrong. If you are not vaccinated or you are vaccinated, and you are a healthy person, you don’t have COVID-19, you are a threat to no one, whether vaccinated or not.

“When  you become a threat to the health of the children as it relates to COVID-19 is when you are infected and the alternative, for me it shouldn’t be a choice between vaccination or not. I believe the alternative is testing. Testing is the only way for us to know who is a threat and who isn’t. So, we should have continued to test regularly, whether vaccinated or not, for the frontline workers. I believe that’s the only alternative.”

The government has dismissed mass testing for COVID-19 as too expensive.

Harry said that he is unvaccinated and that is a personal choice.

Harry said he has no immediate plans to get vaccinated, adding that he does not know what would happen.

“Because, I’ve said it many times, too: I have no issue with the vaccine. I have issues with the mandate. Currently, I believe that my immune system will keeps me safe. Until my doctor tells me otherwise, I can act on that.”