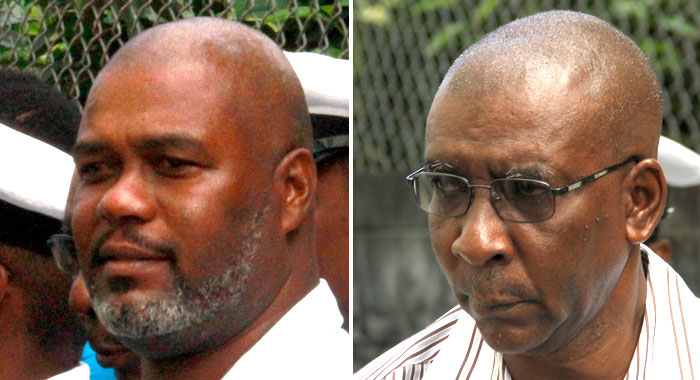 The two men accused of stealing thousands of dollars in social welfare payouts, commonly called ‘Poor Relief”, have been freed of the charges, which date back to February 2018.

Learie Johnson, 66, of Lowmans Windward, and Derville Thomas, a 46-year-old former police officer, of Bridgetown, Biabou, walked out of the Serious Offences Court as free men on Tuesday, after the court upheld no case submission by their lawyer.

A no case submission is upheld when the  prosecution fails to present enough evidence to convince the court that the accused should be put on the defence.

With Chief Magistrate Rechanne Browne’s ruling on Tuesday, at the preliminary inquiry stage, Johnson and Thomas no longer have to worry about answering to the charges before the High Court.

In his no case submission, Connel argued that there was no evidence that Johnson had created or made any false instrument, as the Crown had alleged.

He said there was no nexus between the money recovered from one of the defendants and monies from the Treasury.

Further, there was no evidence that this money was ever handed over by the paymaster, the lawyer argued.

He said that the pay list was only signed off by the paymaster herself and someone from the Ministry of National Mobilisation.

The lawyer told the court that it was baffling that a list could be prepared from the Ministry of National Mobilisation of people who are deceased, sent to the Treasury and significant  sums of money released to pay people who are dead.

Crown Counsel Renee Simmons appeared for the Crown in the matter and asked the court to reject the no case submission and to focus on the evidence that the prosecution had presented to the court.

Commenting on the outcome of the case, Connell told iWitness News

“You really have to wonder about this system. It needs to be modernised or the rats will continue to nibble at the Treasury. Just do the math. Ten deceased in each of four areas where monies are paid each month for five years.”

Public Assistance recipients who are under 65 years old receive EC$275 per month, while those older than 65 get EC$300.

Johnson and Thomas were facing 39 counts of making and using false instruments in Owia on Feb. 2, 2018,

The money allegedly stolen was reportedly disbursed by the government  in the names of deceased people, whose names were yet to be removed from the Social Welfare register.

It was alleged that the charges were brought after a police officer at Owia noticed that Poor Relief payments were reportedly being made without the requisite document.

The Crown alleged that Johnson and Thomas made and used false instruments in the names of deceased persons, some of whom were reportedly yet to be removed from the Social Welfare register.