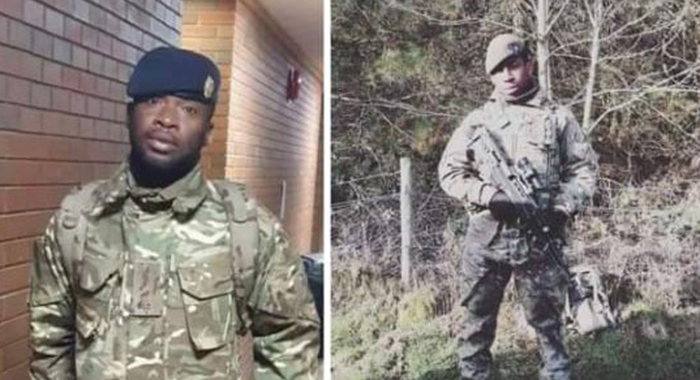 Three Vincentians serving in the British Armed Forces have been granted bail but barred from leaving St. Vincent and the Grenadines (SVG) until the court disposes of attempted murder, unlawful possession of a firearm, and unlawful discharge of firearm charges against them.

Keithron Mills and Brently Butler, of Chester Cottage and England, pleaded not guilty to the respective firearms charge against them today (Monday) when they appeared before the Serious Offences Court in Kingstown.

Keri Phillips, of the same address, was not required to plead to the indictable charge of attempted murder.

Mills is charged that on Sunday, Jan. 2, 2022, at Georgetown, he had in his possession a .45 pistol, serial number AOC52189, without a licence issued under the Firearms Act.

He was granted EC$10,000 bail with one surety and ordered to report to the Georgetown Police Station on Fridays between 6 a.m. and 6 p.m.

His next court date is Jan. 17

Phillips is charged that on Dec. 26, 2021, with intent to commit the offence of murder on Istah Mack, of Chester Cottage, he did an act which was more than merely preparatory to the commission of the offence.

Mack told iWitness News on Dec. 27, 2021 that he was shot while outside his mother’s home, in Chester Cottage on Dec. 26.

It was the second time that he was shot since 2017 and he has concluded that the attacks on him are linked to a 2015 stabbing death in Byera with which his nephew was charged and later acquitted.

On Monday, Chief Magistrate Rechanne Browne granted Phillips EC$20,000 bail with one surety and ordered him to have no contact with Mack

The accused man is to report to the Georgetown Police Station on Fridays, between 6 a.m. and 6 p.m.

Meanwhile, Butler is charged that on Dec. 24, at Mt Young, he unlawfully discharged a firearm at Emi Balcombe, of Langley Park.

Butler was granted EC$9,000 bail with one surety and was ordered to report to the Georgetown Police Station on Wednesdays between 6 a.m., and 6 p.m.

The court has ordered each of the accused men to surrender their travel documents, and to seek the permission of the court to leave the state.

The court has also ordered that stop notices be placed at ports of entry and exit, preventing the accused men from leaving the country without permission.

Disclosure is to be made within one week.

13 replies on “Vincies in British Army on attempted murder, gun charges in SVG”