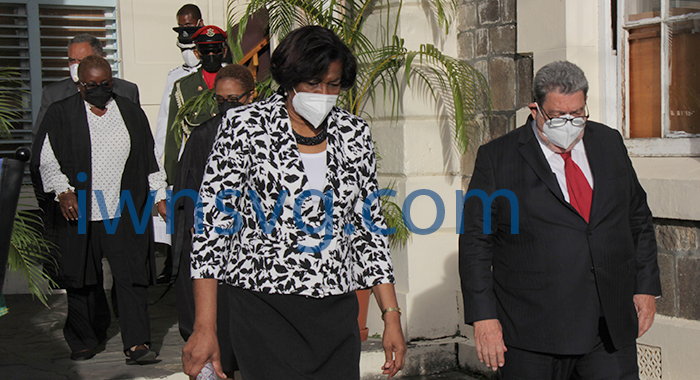 Prime Minister Ralph Gonsalves today (Monday) said he was prepared to call his COVID-19 positive MPs to Parliament to vote to ensure passage of the 2022 budget.

The prime minister made his position clear as Opposition Leader Godwin Friday, rejected as premature a proposal that absent lawmakers be permitted to phone in their vote.

Minister of Finance Camillo Gonsalves is presenting his EC$1.32 billion budget for approval by lawmakers at a time when two of his cabinet members, Agriculture Minister Saboto Caesar and Minister of Education Curtis King have tested positive for COVID-19 .

Ahead of the presentation of the fiscal package, the prime minister told Parliament that one “cannot predict fully the exigencies of all the circumstances which may arise over the next ensuing days of this debate”.

Gonsalves said that given the ease of transmission of the Omicron variant, “even persons who are not yet boosted, and maybe even some who may be boosted, could still get this virus”.

He said that the Parliament may be without the requisite numbers of lawmakers to pass Budget 2022.

The prime minister said that many lawmakers would be following the debate via radio and television.

He suggested “that at the appropriate time for the passage of any bill, that honourable members can phone in their vote to the clerk of the House or persons designated by the clerk.

“I’m sure that the rules will permit such an eventuality, if necessary. It certainly would be desirable,” Gonsalves said.

He said it would be “passing strange, indeed, if we’re here in fewer numbers, we do the debate, and then we can’t vote”.

The protocols for the House of the Assembly, approved by Chief Medical Officer Dr. Simone Keizer-Beache, limit the number of people who can be in the assembly chamber at any one time.

The numbers are proportionate to the government-opposition ratio in Parliament.

Gonsalves said that in some parliaments, lawmakers are permitted to vote on behalf of colleagues because of an arrangement with the speaker.

The prime minister said that the phone-in vote should be allowed in light of the fact that both sides had agreed that there be no quorum points.

“I believe that, in addition to your protocols and the rules you laid out, it may be a not unreasonable caveat,” he said.

Gonsalves noted that the speaker had said that a maximum of 11 lawmakers be allowed in the chamber at any one time — six government lawmakers and the attorney general and four on the opposition side.

“We have at least two members in the Parliament who would be out during this period, because — not that they are sick but they have been tested positive with COVID. And, therefore, all of us have to try to be as safe as we possibly can. So I make that suggestion, Madam Speaker for what it is worth and if it commends itself to you. Well, then we proceed.

In response, the opposition leader said:

“I hope we don’t have to resort to any such irregular processes as voting by telephone. I’ve never heard that happen in this honourable house.”

Friday said that the rules of the house, as far as he knows,  do not provide for phone-in votes.

He cited rule 44 as saying “… all questions proposed for decision in this house, or in committee, shall be determined by a majority of the votes of those present and voting.

“I mean, so how do you define ‘present’ if somebody is not in the chamber in order to vote?” the opposition leader said.

However, the prime minister responded, saying, “… we have never had a pandemic” and reiterated the allowances made regarding the quorum.

“The alternative, if it were to come to that, madam speaker, is that you’ll have to suspend the protocols and those who have tested positive for COVID will come in and vote.

At this point, the House Speaker Rochelle Forde said another consideration is Standing Order 80, “which speaks to the suspension of standing orders, whereby any one or more of the standing orders may, after notice, or with the leave of the speaker, be suspended on a motion made by a member at any sitting”.

Forde said it, therefore, meant that if there was no bipartisan support, “there’s also the option of a motion being made, that motion need not be on notice, as is contained in standing order 25(d).

“So those are options that are available. I’ve heard the position of the Honourable Leader of the Opposition,” Forde said, adding that the parliament was meeting in “strange and unusual circumstances, no two ways about that”.

In response, the prime minister said it would be good if there could be an agreement on this as had been the case with other matters.

He noted what would happen in the event that three or four government lawmakers were unable to attend the chamber and a motion were, therefore, voted down.

This would be the case although there are 14 lawmakers — nine representatives, four senators and the attorney general — who can vote on the government site, and nine on the side of the opposition.

“So it will fly in the face of what is the real world of representative democracy. So I raise it because if it comes to that, and we don’t have an agreement on this, I assure you those who are COVID positive will turn up to vote, because the business must go on.”

The speaker then asked the opposition leader if there was an agreement on the prime minister’s proposal.

Friday maintained his position even as Forde said that given the fluidity of the situation, “it is almost a Plan B. As I’m quite sure you can appreciate we’ve had to be exercising plan A, plan B, plan C”.

“… I see no need for it at this point, Madam Speaker,” the opposition leader responded.

“We cross that bridge when we come to it. Right now, the  government side, they still have a majority in the house. They make an effort to  show up and to be here, if circumstances change, you deal with the circumstances as they arise…”

But Gonsalves said that he did not want to delay the parliament , adding that the matters are “pellucid”.

He said he believed that both government and opposition lawmakers have been “responsible in the way in which we have proceeded with our work.

“And, clearly, there is a full expectation that all of us who are able to present by virtue of us not being encumbered by any public health restriction, that we will be here to vote.

“But, as you well put it,  just in case, that is all we are doing, we are alerting  in advance a possibility, faint as that possibility at the moment may well be, but it would be a strange thing for us to do all the debate and that COVID defeats us in having the bill passed.”

The prime minister said he raised it and if the occasion arises, “be assured that I will do what I have to do to get the bill passed”.