Opposition awaiting word from CMO before returning to Parliament 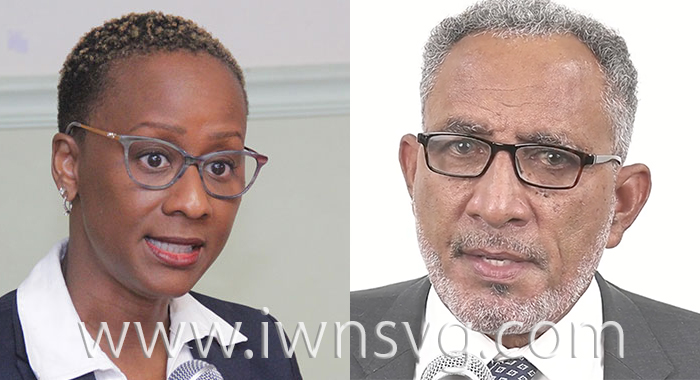 Friday was scheduled to respond today (Tuesday) to the EC$1.33 billion 2022 budget presented by Finance Minister Camillo Gonsalves on Monday.

Friday told a New Democratic Party (NDP) press conference that House  Speaker Rochelle Forde telephoned him before 9 a.m. Tuesday, saying that  the CMO had directed that all Parliamentarians be tested for COVID-19 before the day’s proceeding.

He said that Forde further indicated that the resumption would be delayed to allow for the testing.

The opposition leader said he arrived at Parliament just after 9 a.m. and one of his colleagues told him that the finance minister had tested positive for COVID-19.

Shortly after, Friday learned that Francis had tested positive also, he told the press conference.

He noted that neither Prime Minister Ralph Gonsalves nor his deputy, Montgomery Daniel was at Parliament at the time.

The prime minister told the Parliament on Tuesday that he had not planned to attend the day’s session but Daniel and Keisal Peters, a government senator, had “a digestive problem” and would not attend the meeting.

Friday said that no one informed him, officially, about the two MPs’ positive COVID-19 tests.

He said he later spoke with the speaker, telling her that the situation was untenable and he and the other opposition members felt that it was not safe in the chamber.

The opposition leader said no one seemed to be leading government business at the Parliament building.

“The prime minister wasn’t there for most of the time. He came after we had left the chamber and the Deputy Prime Minister, Daniel was not present.

“So there was a lot of uncertainty in the house this morning,” Friday said, adding that information was not very forthcoming.

“The speaker was the person who was most in contact with us and the speaker didn’t make a decision, one way or the other, about the status of the sitting on that day,” the opposition leader said.

He said he had indicated to the speaker that in the circumstances of members having raised a concern about their safety and the conditions within the chamber, that they had thought it best for their security to leave and to be downstairs.

“And that’s what we did,” Friday said, adding that opposition lawmakers gathered in the court yard and agreed that in the circumstances they would not return to Parliament today.

“Safety is my paramount concern — safety of everyone. But I have also responsibility, special responsibility, to my colleagues, as the leader of the opposition, as their leader in the house, to take decisions to protect their interests and well being,” Friday said.

“So, in consultation with them, we took a decision to leave the Parliament building and not to return for the day, at least until the situation became clearer, and until the chief medical officer had considered and weighed in on the matter.”

Fridaysaid that COVID-19 is serious and people must protect ourselves.

“I want my colleagues to be safe and to feel safe. When we show up for work at the Parliament building to do the people’s business, we know that is important business. But I don’t think that in the circumstances the risk of infection would override the need to have the Parliament done today. This can be done at some other time.”

He noted that the budget was postponed from week Monday, Jan. 3.

“And that was because the speaker of the house was exposed to someone who tested positive. She told me this herself by telephone, and she said that she had been directed by the chief medical officer not to attend the Parliament.”

Friday noted that the budget has to be debated, adding that he was looking forward to presenting his response today.

“In sum, the budget lacks substance. And I wanted the opportunity today to present that, and I will do so. But I will only be there to do so under the proper circumstances approved by the chief medical officer.”

The finance minister was not masked as he delivered his five-hour budget address on Monday.

Physical distancing is observed in Parliament and the most recent protocols mandate N95/KN95 masks for all persons in the chamber, except vaccinated MPs who are speaking at the time.

Regarding whether all MPs who may have been exposed to COVID-19 on Monday should quarantine, Friday said:

“Again, I may have my own view. But I tend to give the chief medical officer the respect that the office deserves.”

“She (the speaker) indicated to me that she was not to be present in the chamber. The similar situation should require or would require a similar determination,” Friday said.

“And so this is why I said earlier on that I would look forward to hearing from the chief medical officer, given the developments that took place today,” he said, noting that it was only Tuesday morning that MPs were told that they all have to take a rapid antigen test.

“And again, the speaking formula, this was on the direction of the chief medical officer. And it is that test this morning that discovered the two members who are already in the chamber and tested positive on those tests.

“And so, having seen those developments today, I would expect the chief medical officer will make a pronouncement on it and that certain changes or adaptations to the protocols would be made based on her best scientific judgement,” Friday said.