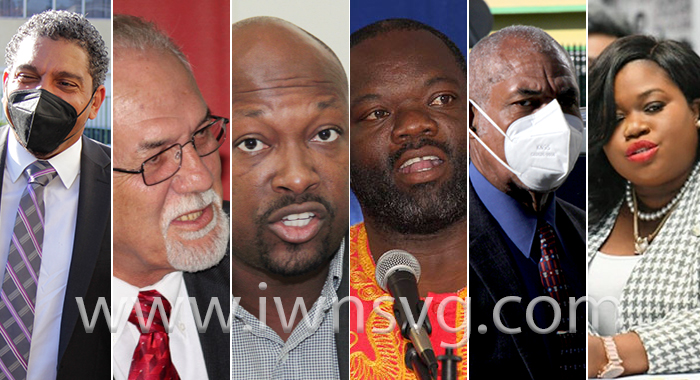 The development forced the suspension of the Budget Debate on a day that Opposition Leader Godwin Friday was scheduled to respond to the EC$1.33 billion fiscal package that Gonsalves presented Monday evening.

The two COVID-19 infections are in addition to Minister of Agriculture, Saboto Caesar and Education Minister Curtis King —diagnosed on the weekend.

The finance minister returned a positive COVID-19 result hours after delivering a five-hour budget address — while not wearing a mask — in the air-conditioned chamber, where there are no plexiglass shields for vaccinated MPs, who can remove their masks while speaking.

All other persons in the chambers were expected to wear an N95/KN95 mask while in the assembly chamber.

The Budget Address focused largely on the COVID-19 pandemic and the government’s response to it in 2022.

Meanwhile, the prime minister, who announced the new positive results to Parliament, said that he had tested negative, but noted that members of his security detail had received positive results.

Gonsalves seemed to entertain the probability that he, too, could receive a positive result before the debate is completed, even as he said that he intends to speak for the ill ministers during the four hours allotted to him.

“Madam Speaker, Honourable Members, given a train of circumstances, have put us in a position where I think that all we can do today at this honourable house is to suspend the sitting until tomorrow morning at nine o’clock…,” the prime minister said.

He was speaking around 10:10 a.m. — 70 minutes after the debate was scheduled to commence.

“The train of circumstances, in a nutshell, can be put down to two other COVID cases on the government side…” the prime minister said.

He said that the finance and urban development ministers had tested positive on the rapid antigen tests, required for entry into the national assembly under the most recent protocols.

Gonsalves said he could understand  the leader of the opposition not wanting to deliver his address either in the absence of the minister of finance, the prime minister, or deputy prime minister.

“But I think it is fair and reasonable in all the circumstances to not continue today, because the rules make it plain that after the minister of finance speaks, the leader of the opposition must speak the next day.

“And though there was nothing to have prevented him from speaking this morning because we’re not taking any issue of quorum, but I understand why he chose not to speak.”

The prime minister was citing the same rules, which he suggested, on Monday, be suspended so as to allow absent MPs to vote on the budget.

Friday had rejected the proposal as “premature” and had further indicated that the rules had specifically said that only MPs who were “present” could vote in the national assembly.

The prime minister said that he had not planned to be at the national assembly today and had been waiting for a nurse to test him at his official residence, “because she had to be there to test some officers on the security team who came down with COVID”.

He further noted that in light of protocols limiting the number of people allowed in the chamber, that no issue of quorum was being raised and that was why the sitting could have commenced Tuesday morning.

“But it would be invidious and contrary to the rules — well if even not the rules in their literal sense, in the spirit of the rules and I really think that the the country should hear the leader of the opposition’s response and I think that opportunity should be made available at the soonest possible time.”

Gonsalves said that when he arrived at Parliament Tuesday morning, the opposition leader and three other opposition lawmakers were outside.

“… but they chose to leave. It would have been good if they did not leave. So that we could have had, at least, a later start. And it would not have been a bad thing to start at 10, given them all what has transpired.

“We are in a fluid situation with COVID. And I say, madam speaker, that what happened at this workplace called the Parliament is happening across workplaces, all over St. Vincent and Grenadines and everyone has to have an understanding and forbearance in this matter.”

The development comes even as unvaccinated lawmakers, or those have not disclosed their vaccination status, have to speak from a speaking booth at the back of the assembly chamber, while wearing an N95/KN95 mask.

Gonsalves said that the suspension of the sitting until Wednesday morning is not expected to affect Friday’s targeted completion of the debate.

He said that assuming that the two two positive antigen tests on Tuesday are not false positives, it means that Francis and Camillo Gonsalves would not be able to speak during the debate.

The prime minister said that with Ministers Caesar and King also not speaking this week, in his three-hour contribution, a veritable wrap up, he would have to speak for four ministers.

“It would mean, therefore, that the prudent thing for me would not to speak before the conclusion of the debate as a whole. And, therefore, in my allotted four hours as prime minister, I can at one and the same time, do my own contribution, and wrap up the debate itself.”

“I may say further, madam speaker, that my role in that regard would come to an end, if in my goings and comings, that I am also tested positive for COVID at any subsequent time.

“So I see my spiritual brother, an Anglican lay preacher, at least formerly, the honourable Minister of the Public Service [Frederick Stephenson] that he knocked wood just now. And I’m with him on that.”