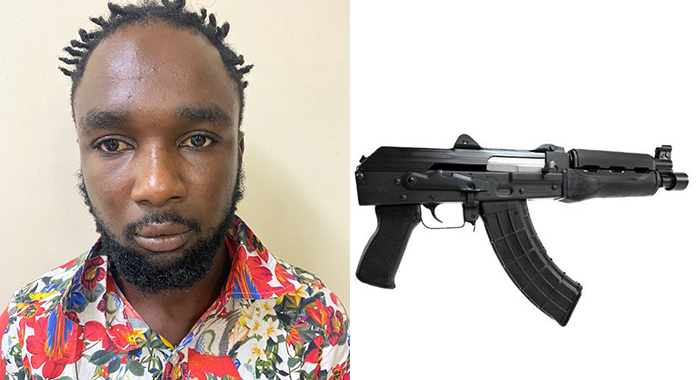 Urhando Rock, left, and an internet photo of the type of firearm he had in his posession.

A Green Hill man who told the court that a man recently released from prison gave him a prohibited firearm to hold, has been jailed for four years and three months for his crime.

The eight-month sentence that Chief Magistrate Rechanne Browne also handed down on Urhando Rock, a 25-year-old farmer, for possession of two rounds of prohibited ammunition will run concurrently.

On Monday, at the Serious Offences Court, Rock pleaded guilty to a charge that on Jan. 9, at Green Hill, he had in his possession one M92 Zastava AK pistol serial number 192PV066114, a prohibited weapon, without the authorisation of the Minister.

He also pleaded guilty on a charge that on the same date and place, he had in his possession two rounds of 7.62 prohibited ammunition without authorisation of the Minister.

The facts of the case, as read by Sergeant Athnel Ash, are that on Jan. 9, 2022, about 5:50 a.m., acting on information, Corporal 615 Williams headed a party of police officers to execute a search warrant at Rock’s home.

The officers found the firearm in a pillowcase inside a grey and black suitcase.

Rock and his girlfriend were standing next to the suitcase, which was on the bed when officers kicked down the door after hearing loud noises inside, even as no one responded to their shouts of, “Police! Open the door!”

Williams found the ammunition in a small compartment inside the suitcase.

The officer showed the firearm and ammunition to Rock.

Ash told the court that Rock had mentioned a name and sought the court’s permission to omit the name.

“Officer, is (name omitted) who gave me the gun to hold; give me two to there days ago so me call him for the gun but he nah come,” Ash quoted Rock as telling the officer.

Station Sergeant Julian Cain, a gazetted ballistic expert, examined the weapon and ammunition and found them to be “in good working condition”.

An officer at the Criminal Record Office also dusted the firearm for fingerprints.

Rock gave a detailed statement to the police in the presence of Justice of the Peace Errol Hazell.

In his evidence to the court, Cain said that the firearm has a magazine capacity of 32 rounds.

It can discharge up to 620 rounds per minute.

Cain confirmed that that was the case.

He said that the firearm uses 7.62 ammo.

“This firearm can wreak havoc, your honour,” Cain said and demonstrated how the firearm is operated.

“Your honour, this firearm is designed to kill,” Cain said.

At this point, the chief magistrate asked Cain if the firearm was discharged outside the court at Lower Kingstown Park in the direction of the sea, how far the round is likely to travel.

“It will go beyond the seawall at Tokyo. It will go well into the sea.”

Responding to a question from the prosecutor, Cain told the court that the firearm has the same range as the M4 rifles used by the police but carries a larger calibre of ammunition.

In mitigation, Rock told the court that he has a pregnant girlfriend.

He said that someone brought the firearm to him between Wednesday and Thursday and was supposed to collect it on Saturday.

The person did not, and, on Sunday, the police turned up at his house.

“It ever crossed your mind not to hold it?” the chief magistrate asked.

“It did, because I end up and tell someone about it,” Rock told the court.

He said that the person who gave him the weapon to hold was recently released from prison.

“Even more reason to say no. You are dealing with a convicted felon who is coming to you,” the chief magistrate told Rock, who told the court that he is not a troublemaker.

Making representations on sentencing, Cato told the court that the police didn’t just wake up and conduct a random search.

“They acted on information and the actions of the defendant when the police arrived — it took force by the police to get into the house. Says a lot. It speaks about possession: knowledge, custody, control.”

The prosecutor noted that possession of a prohibited weapon carries a maximum sentence of 10 years in prison, adding that prohibited ammunition was also found.

“It is always frightening when the maximum effective range of these weapons are outlined,” Cato said, adding that it is frightening that such a weapon is in the hands of someone without a licence.

“I don’t know what else I can say regarding possession of firearms and ammunition.”

He asked the court to send a strong message to would-be firearm offenders.

After the sentence was handed down, Rock who had laughed intermittently during the hearing heaved a heavy sigh.

“It gives me no pleasure to give these sentences when I see young men coming over and over. Either females are smarter or don’t get into trouble. Young men with no record foolishly throw it away when everything else says, ‘Don’t do it.’”