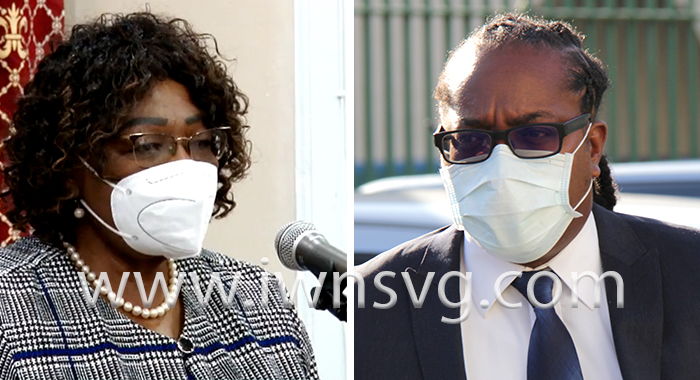 The Unity Labour Party government has revoked the senatorial appointment of COVID-infected Rochard “Pit Bull” Ballah, replacing him with former MP for West Kingstown, Rene Baptiste, as the government continues its bid to pass its EC$1.3 billion budget for 2022.

As of Wednesday, eight members on the government side, including Finance Minister Camillo Gonsalves, had tested positive for COVID-19, forcing Prime Minister Ralph Gonsalves to suspend the debate to today, Friday.

The prime minister made the decision to suspend the debate hours after he rejected a proposal by the opposition that the debate be adjourned for five days, because of the COVID-19 cases.

No opposition lawmaker has tested positive for COVID-19, although they are not all vaccinated, unlike on the government side.

When the latest positive case emerged Wednesday afternoon, the opposition announced that they will take no further part in the debate.

When the debate resumed around 9:30 Friday morning, the prime minister announced that he had advised the Governor General to revoke Ballah’s senatorial appointment and to appoint in his stead Baptiste, who is also speaker of the OECS Assembly.

After Baptiste had taken the oaths, the prime minister told Parliament there was a “confluence of circumstances” in that COVID-19 and all its variants and mutation had caused a number of MPs to be absent, having contracted the virus.

He said that because the MPs, like the new senator, are vaccinated “that has made it really for them to be not what we will call sick, because I have spoken to them all and they are doing pretty well”.

Gonsalves said that the government was happy to welcome back to the assembly chamber Minister of Agriculture, Saboto Caesar, who tested positive for COVID-19 on the weekend but was cleared on Thursday.

Hesaid that about 5 p.m. Friday, Minister of Health St. Clair “Jimmy” Prince, who tested positive on Wednesday, could be cleared to rejoin the debate.

The prime minister said that eight people constitute a quorum of the House of Assembly.

He said that in the absence of the opposition “and given the necessity for the passing of this urgent matter” — the Appropriation Bill and the Public Sector Investment Bill — as leader of the house, he did not want to await possibly the return of the Minister of Education or anyone else, hence Baptiste’s senatorial appointment.

Gonsalves said that his government has set itself the objective of passing the bill before this weekend.

He said that the opposition had indicated, through its conduct on Wednesday and later in public statements, that they did not intend to return to the house.

“In other words to obstruct and frustrate the business of the people,” Gonsalves said.

He noted that SVG has the first-past-the-post electoral system, and in the general elections of Nov. 5, 2020, his party won nine of the 15 seats.

“And we cannot have six representatives or the party that is directing them frustrate and obstruct the legitimate business of the people,” Gonsalves said.

The prime minister said that on Wednesday the opposition was operating on a misapprehension that because the Estimates were passed, the government could spend money from the budget.

“That is not so. They have not read properly the Finance Administration Act because no new capital programme can have any money drawn therefrom.

“And we cannot wait any day longer to have both the Appropriation Bill passed and the Public Sector Investment Loan Bill, which is to raise $125 million to finance the capital budget.”

He said that the opposition may wish to turn up now and that is fine with him.

Gonsalves, however, said that he wants to make it clear that he intends to finish the bill “today and maybe into tomorrow” so that by Monday they can be assented to by the Governor General and gazetted.

“I will not tarry on the government business, especially where large sums are involved for the poor, vulnerable, working people and the nation as a whole.”

He said he had given assurance that his government would pass the bill.

“And the Constitution is written in a manner to permit precisely what we are doing here today in the circumstances,” Gonsalves said, adding that there are additional leeways in light of the fact that another senator had tested positive for COVID-19 — an apparent reference to Minister of Urban Development Julian Francis.

“This idea of people trying to play politics out of COVID is despicable and to rejoice about people who get COVID, I mean it is entirely — I want to use a word but will restrain from using it and say it is wholly wrong to do so,” said Gonsalves, who in the early part of the pandemic requested, on two occasions, that his party’s radio station play a song about “Jah lick them with diseases”.

Regarding Baptiste’s senatorial appointment, he said he thought it “very fortunate” to have a very distinguished lawyer and former parliamentarian who served in the Parliament from 2001 to 2010 and is president of the Bar Association.

Gonsalves said that during Baptiste’s time as a senator, she would demit her office as chair of the board of directors of VINLEC — the state-owned electricity company — although she is not required to do so.

He said that she had submitted the resignation to him, adding that Baptiste had told him that she had been following the debate with great interest and the pronouncement by the minister of finance on Monday.

“And I look forward very much to her comments in these proceedings. She is an old hand at this,” Gonsalves went on to thank Ballah, whom he described as “a splendid young man for whom I have high regard”.

Gonsalves said that Ballah understood that the government had to get the people’s work done.

The prime minister said that he wanted to emphasise the point that all that was required was for one member of the opposition to come to Parliament and to sit there.

He said that the opposition lawmaker did not have to say anything and could have voted against the fiscal package.

“They have chosen an anti-people path and the government will not allow them to be obstructionist in that manner,” Gonsalves said.

Meanwhile, Baptiste told Parliament that when Gonsalves called her, she was “a bit silent” but then told him that he would accept the senatorial appointment.

She thanked him for the opportunity to continue “this service in the interest of the people of St. Vincent and the Grenadines”.

Baptiste told Parliament that sometimes things would happen and one would have to be like a good soldier — always ready to give service and do one’s best in the circumstances.

She said this was a situation that required it and she was there to report for duty on behalf of the people.

Baptiste said she looked forward to her stint in the senate and will draw on her experience as an MP and senior member of the cabinet for almost 10 years.

“These are serious times,” Baptiste said, adding that she would continue to serve to the best of her ability.

She complimented the minister of finance on “the excellent budget” that he has presented and said she hoped that while sitting in the chamber she could take a deeper look at matters that are of interest to her and make “a short contribution” to the debate.