Pitbull not ‘going to be long out of the House’ — PM 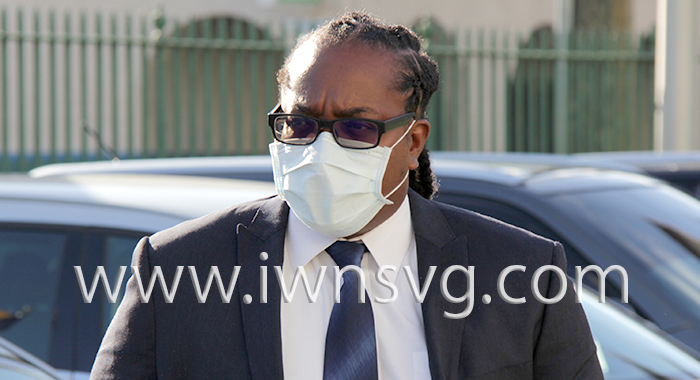 Then-senator Rochard “Pitbull” Ballah on his way to Parliament last week Monday, Jan. 10, four days before his appointment was revoked.

He said on state radio on Wednesday that he had instructed Ballah to report to work, once cleared of his COVID-19 infection.

Ballah, who is trained in communications and is a DJ, a radio personality and a former lecturer, campaigned with Gonsalves’ Unity Labour Party for the November 2020 general elections and was appointed a senator that month.

He was also Parliamentary Secretary in the Office of the Prime Minister, Ministry of Foreign Affairs, National Security, Legal Affairs, and Information.

Two days earlier, the opposition withdrew from the debate, which Gonsalves had refused to postpone even after seven of his MPs tested positive.

The absence of the opposition would have made it impossible for Parliament to convene, had the prime minister not swapped senators.

Gonsalves suggested in Parliament that the move was a temporary one, adding that he was prepared to revoke the appointment of another senator if it was necessary.

Senator Julian Francis, who is Minister of Urban Development also had to miss the debate because of his COVID-19 infection.

Speaking on NBC Radio on Wednesday, the prime minister said that he had postponed that day’s Cabinet meeting to Thursday.

“I had most of the persons available but there are one or two — for instance, Camillo is cleared but a member of his family who lives with him in the house is not cleared yet. So he has to help with the domestic arrangements,” the prime minister said, referring to his son, who is also Minister of Finance.

“… so, to keep that person from others… So, if people don’t see him, he’s actually cleared,” he further said.

Gonsalves had said last week Friday, Jan. 14, that the finance minister, who tested positive for COVID last week Tuesday, Jan. 11, “telephoned me and said that his family was being tested and they were all negative”.

The prime minister said that the finance minister was administered a rapid test, though it was not the fifth day, and it was negative.

“And he took a PCR. I don’t know, but because tomorrow would be the fifth day, he wouldn’t come because he has to stay out, because that’s what the protocol says,” the prime minister said last week.

On Wednesday, the prime minister said that his Health Minister, St. Clair “Jimmy” Prince, who tested positive one week earlier, was expected to be cleared by that day.

“I want to give until tomorrow so that I’ll have the cabinet tomorrow,” Gonsalves said.

“I’m hoping Pitbull would be cleared too. Though he is no longer senator, I told him that he must still come down. There’s work for him to do. You know what I mean.

“And his emoluments should be paid in a different way. Not a senator… Because I think from the way I spoke, as you’d know, it’s not that Pitbull is going to be long out of the House.”

The next meeting of Parliament is scheduled for Feb. 28.