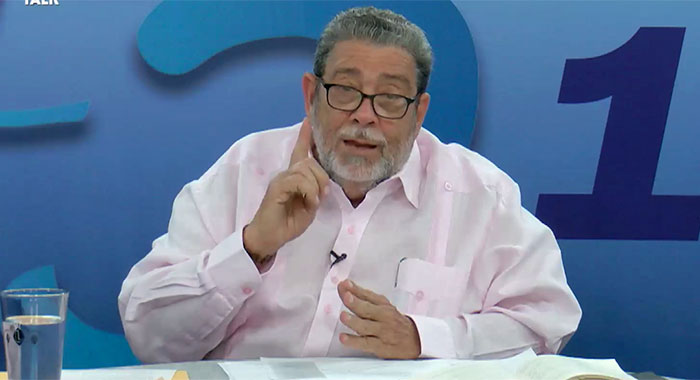 Prime Minister Ralph Gonsalves has defended his government’s move to bond locally trained nurses, saying it does not contradict his statement some time ago that his government is training nurses for export.

“No, the bonding is not in contradiction of that because at the time — persons didn’t listen to what I say, that we are producing more than enough for ourselves and to export. And that has been the case since 2002,” he said on radio on Sunday.

Last week, the prime minister announced on state-owned radio that the bond would begin with the current cohorts of nursing students.

And, speaking on WE FM on Sunday, the prime minister noted that people who received national scholarships and bursaries are bonded, but it did not apply to nurses, who are also trained at the expense of the state.

“It’s only our nurses, because we used to produce so many, and the demand had not grown as great. But now that the demand is very great, we have to give consideration to bonding them.”

He said that Vincentian nurses are migrating because of the high demand for nurses, particularly in Britain, but also in the United States.

“We need to keep some for ourselves,” Gonsalves said, adding that the country had had an excess of nurses because it was training more than it needed, and even facilitated arrangements for them to work overseas.

“But now, there’s a significant flight because of the demands, through COVID, in Britain, especially, but also the US. So we will have to do some, some temporary corrective in that regard,” the prime minister said.

He said that he had spoken to the chief personnel officer and also the director of the Community College in this regard.

“Because remember those students, we’re giving them practically a free education, and also paying them $1,000 a month while going to school.

“I don’t think that they can complain if they have to do a few years before the time they consider to leave. I noticed when I made that announcement that some persons, for political reasons, pounced on me and attacked me. I don’t know — people attack you for anything,” he said.

The prime minister said there was “a huge shortage of nurses” when his government came to office in March 2001. Hence, in September 2001 it recruited 20 from Cuba, who stayed for two years.

That same month, his government began training100 nurses per year, giving them a free education and an EC$1,000 stipend per month.

There are people who oppose me doing that, you know,” Gonsalves said.

“But I knew what we were doing — it’s a poverty-reduction measure — poor people children, children of the poor, the working people, the farmers, could get an education nursing because it’s an expensive programme; it’s the most expensive programme of the programmes which are done locally.”

He said the programme continued without any bonding of the nurses.

“I didn’t see the sense in bonding the nurses because we were producing more than enough in terms of the supply and demand.

“In fact, there are some nurses who are qualified, couldn’t get jobs because they weren’t yet going overseas.”

Gonsalves said that at that time, the British market was only accepting nurses with full degrees and not those with associate degrees or regional certification.

“Then they changed that as the demand became greater,” he said, adding that the UK market began accepting graduates from the local nursing school and those with regional certification.

“And in order to move the way in which countries are moving all over the world towards the degrees, we move towards the degrees,” the prime minister said, adding that nursing degrees are being offered locally through the University of the West Indies.

The degrees, we’re articulating the degree for UWI, Mona. You do the programme here but you get a degree from UWA, Mona.

The prime minister said that just before the coronavirus pandemic, SVG began to see an increase in the migration of nurses.

“In fact, I don’t know if you noticed we had stopped for a few years doing the associate degree nursing programme. We’re starting back because we had to make up time because of a growing shortage because of the numbers who are going and then that has accelerated since COVID because the British, they have a serious shortage, United States, too.”

He said that individual nurses were seeing jobs overseas and then recruiting their friends, while others were recruited through agencies.

“There’s not a contradiction. It’s application of the same principle in a different situation,” Gonsalves said.