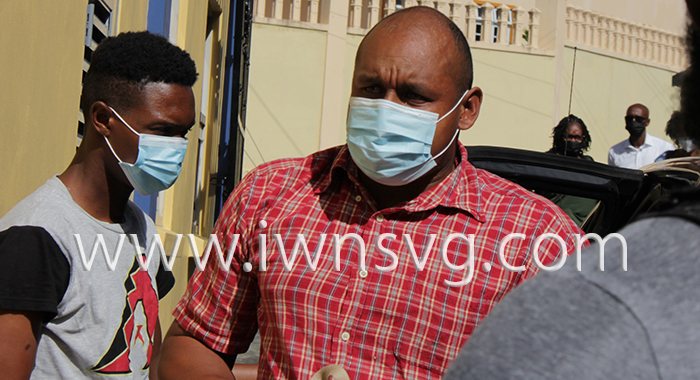 The accused, Rodney Thomas arrives at the Serious Offences Court for his arraignment on Monday, Jan. 24, 2022.

An Owia man was today (Monday) granted EC$30,000 bail and ordered to not leave the country in connection with 3,623 grammes (7.98lbs) of cocaine he allegedly had in his possession in his village on Saturday.

Rodney Thomas, 33, pleaded not guilty at the Serious Offences Court to a charge that on Jan. 22, at Owia, he had in his possession, a controlled drug, to wit 3,623 grammes of cocaine with intent to supply to another.

He further pleaded not guilty to a charge that he had the drug in his possession for the purpose of drug trafficking.

The prosecutor, Station Sergeant of Police Renrick Cato objected to bail for the defendant on the grounds that the police are still conducting investigation into the matter.

He said that the investigation may result in other charges against the defendant or other people being charged.

Cato said that investigators were fearful that if granted bail, Thomas could hinder the investigation.

He said that the prosecution was asking for at least one week to have the investigation completed.

The prosecutor asked for an adjournment for a report date, where a date for trial could be set.

However, Counsel Jeshua Bardoo, who was holding papers on behalf of Israel Bruce, objected to the prosecutor’s application and argued that his client should be granted bail.

Bardoo noted that the offences against his client are  bailable offences, adding that his client was in custody since Saturday morning.

He said that the police could continue with their investigation even if his client is granted bail.

“He does not need to be in custody for the police to question him or further investigate the matter,” Bardoo argued.

Bardoo told the court that his client had assured him that if granted bail he would come to court for the next hearing.

The lawyer said that the accused is not a flight risk and gave the assurance that he is willing to submit his passport, if the court thinks he is going to leave the jurisdiction or would be unwilling to attend court.

Bardoo further said that the accused was willing to submit to any bail condition and has a fixed place of abode.

The accused lives with upstanding family members who are willing to ensure he attends court, the lawyer said, adding that Thomas lives with his mother, younger brother and sister in Owia.

“These members of society are upstanding persons who can ensure that he comes to court for the next hearing in this matter,” the lawyer said.

“My client is also not a threat to any potential witnesses in this matter. He has given assurance that if granted bail he will not interfere with any other witnesses.”

Bardoo said that Thomas has no previous conviction nor had he even been charged with anything before.

“Therefore, he is a man of good character and these things should be taken into consideration,” he told the court, adding that the purpose of bail is to ensure that the accused person comes to court

He said that Thomas is a productive and upstanding member of society, who graduated from the Georgetown Secondary School in 2007.

He then worked as a sailor on Norwegian Cruise Line for four years, but became unemployed in 2020, due to the pandemic.

After Thomas became unemployed, he went to Canada for six months to seek opportunities there but was unsuccessful and returned in July 2021.

“Therefore, for many years, my client has been an upstanding member of society and has been a productive person in society and if granted bail, hopes to continue that.”

Bardoo said that Thomas has been searching effortlessly for employment, but has been unsuccessful.

He said that his client has sureties in the persons of his mother and a cousin, who are willing to cover the bail .

“Considering all of these factors, I don’t think it is reasonable for the prosecution to object to my client receiving bail this morning,” Bardoo said.

“After such an extensive presentation, it would be most unreasonable to not grant bail to the accused person. Thank you, Mr. Bardoo.”

Browne said that in arriving at her decisions, she considered the quantity of cocaine, and balanced it against the lawyer’s representations.

The chief magistrate said that she did not think that granting bail would be unreasonable even as the police continue vigorously with their investigation.

She ordered Thomas to report to the Owia Police Station on Mondays and Thursdays between 6 a.m. and 6 p.m. and to surrender his passport, national identity card and driver’s licence.

The chief magistrate also ordered that stop notices be placed at ports of entry and exit.

“I am aware of the porous nature of our borders and the defendant being from Owia, which is a fishing village,” Browne said.

She said that the authorities must ensure that the notices are communicated so that Thomas does not leave the state without the permission of the court.

The matter was adjourned to April 4.

The charges stem from a police operation in Owia on the weekend, where 3,623 grammes of cocaine were found at a house, and 54 packages, believed to be at least 54 kilograms (119lbs) were recovered from a locked room at the Owia Clinic.