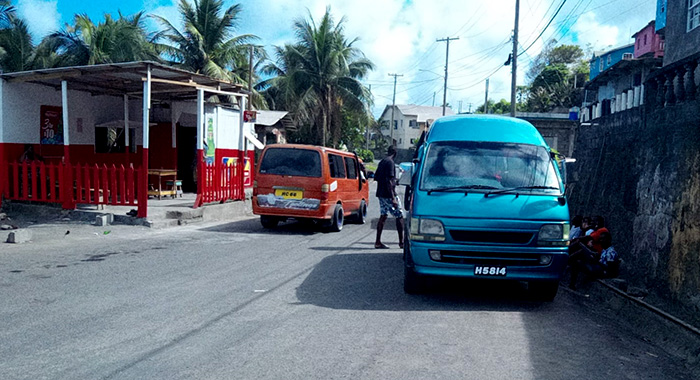 A number of government omnibus operators contracted to transport North Windward students to secondary schools in Georgetown and Mt Young say police removed students from their buses on their way to school on Wednesday.

The drivers say that traffic police officers, on patrol from Kingstown, told the children to get off the buses at “Sheep Pen”, adding that the area is “lonely” (uninhabited) between Overland and Orange Hill.

The officers were enforcing the government’s COVID-19 protocols, which limit to two-third of their regular capacity the number of passengers omnibuses can transport.

“Sandy Bay Secondary, Georgetown Secondary — all the van men got tickets,” one driver told iWitness News. “It looks like the police came out for us!”

“Almost everybody got tickets,” another van driver from Sandy Bay said.

iWitness News also understands that the bus assigned by the government to transport children from Fancy, Owia and Sandy Bay who attend the North Union and Georgetown secondary schools, has not operated since the school term began in January.

No other vehicle was assigned to the area, neither were parents contacted.

However, the driver who transports children to the Sandy Bay Secondary School usually assists whenever possible.

One parent from Fancy, whose child attends North Union Secondary School, told iWitness News that her son is forced to stay at home at times as the bus that transports children to Sandy Bay Secondary School is usually full.

The parent said that at the end of the school day, her child usually takes a van from North Union to Sandy Bay, and then hitchhike to Owia before walking the four uninhabited miles to Fancy.

At times, the child might be fortunate to get a ride from Sandy Bay to Fancy – a distance of 5.4 miles.

“The bus is the one that the government bought to replace the private minivan that transported children and was destroyed in the Rock Gutter tragedy in January 2015 when the children died. However, every school term, something is always wrong with it and it has to end up at the mechanic’s,” a relative of one of the students told iWitness News.

One father was “very concerned” that his son hitchhikes to and from school.

Most of the time, the child is late for school and has to explain to his principal how he gets to school.

“My son is missing out a lot. Today, he couldn’t go to school because he couldn’t get a ride. One time he got home minutes to six in the evening and this could be very worrying and frustrating because sometimes he alone has to walk from Owia to Fancy.”

The father explained that while his son has a cell phone, there are dead spots in the cellular network along the route.

“It’s unfortunate that the children have to go through this rough time getting to school when a bus was donated after the Rock Gutter tragedy to transport the children. I think the operation of that bus needs to be looked into. The child can’t get transport to go to school and there is no alternative transportation for children.”

A parent from Owia, whose fourth former has no issues getting to and from school, noted that other secondary school students from the village who attend school in Kingstown  — 33 miles away– have to take public transportation.

This is the case although a government bus is stationed 3 miles away in Sandy Bay.

“This is a concern to me,” the parent said.

A mother from Point, whose daughter travels daily to a secondary school in Kingstown, was “highly annoyed”, adding that she does not understand the arrangement.

“It appears as though the children are basically left on their own between Point and Sandy Bay to get to and from school.”

The parent said that the bus in Sandy Bay that transport students to schools in Kingstown does not go to Point, and the students have to walk or hitchhike to Sandy Bay.

The mother said that the bus driver told her that someone would transport the six children from Point to Sandy Bay but that is not always the case.

At times, the driver would leave children behind, the parent said, adding that twice recently, a number of students, mainly females, were left at Boat Bay, an uninhabited area between Sandy Bay and Point.

“The entire situation is ridiculous,” the woman said.

The drivers who were affected on Wednesday also complained that they were highly annoyed about the removal of school children from their vehicles in a lonely area.

However, while the drivers complained about the students being removed from their vehicles, they were accused of other traffic offences, including failure to have conductor on board, not having a spare tire, and overcrowding,

However, the drivers contend that as they are contracted to transport the students, they are not obliged to have a conductor on board during those trips.

“The police took three children out of my bus, leaving them where nobody lives in a lonely place. They left the student there and still charged me (issued a traffic ticket.”

The driver, who transports children from Sandy Bay to Mt Young (Sandy Bay Secondary School), said his bus is licensed to take 25 passengers but because two of the contracted buses are not working, he had 28 children on board.

He said he was given three tickets, including one for not having a conductor.

“When you do your contract trips, you are carrying school children. I am not operating the bus as I would normally do. What do I need a conductor for?”

Another driver, who was also issued with a traffic ticket, said his bus is licensed to take 18 passengers and he takes 18 school children.

However, he said that because of the COVID-19 protocol, which limits to 12 the number of people he can transport, he would comply and only transport 12 students

The drivers said eight buses from Sandy Bay, four from Owia and two from Fancy are assigned to transport students to the Sandy Bay, Georgetown and North Union secondary schools.

iWitness News understands that at present the North Union Secondary is offering both online and face-to-face instructions.

We were informed, however, that the entire student body will return to face-to-face classes this Monday, which is likely to worsen the transportation issues for students in North Windward.

iWitness News contacted the Traffic Department on Thursday, but no officer authorised to speak to the media was available to comment.