Teen motorcyclist ‘paralysed’ after being ‘run over’ by police 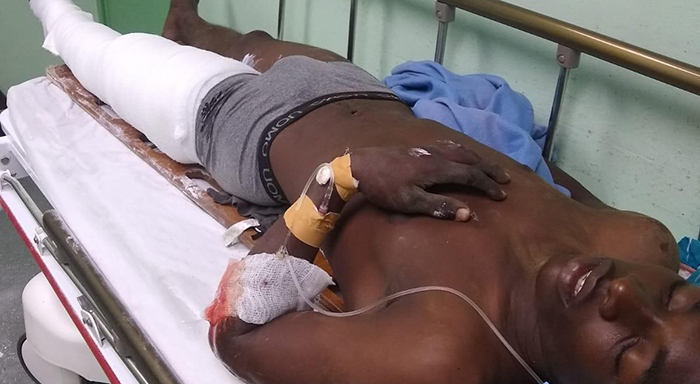 An Argyle woman says that doctors told her today (Friday) that her son is paralysed from the chest down after police allegedly ran him over, reportedly during a vehicular chase on Wednesday.

“The doctor just told me that he is paralysed from the chest down. His left leg is broken and his spine is broken,” Natasha Weekes told iWitness News of her 18-year-old son, Cjea Weekes.

“He said [that after the accident] they (police officer) threw him in the [police] vehicle and when they threw him in, he was telling them he was feeling pain,” the mother told iWitness News, recounting what her son had told her.

“Even when they brought him to the hospital, the way they took him out of the vehicle, people thought that he was dead. The workers who were there asked what had happened to him. All they told the workers was that he had gotten into an accident and they (police officer) left.”

She said that her son’s speech is deteriorating and one had to put one’s ears close to his mouth to hear what he is saying.

However, Commissioner of Police Colin John, told iWitness News that the report reaching him is that the youth was injured when he fell, shortly after he ignored a police signal to stop while riding a motorcycle dangerously.

“I don’t know about being chased. The information I received from the police is that he was riding the motorcycle in a dangerous manner, the police came out of the vehicle, they gave him the number one stop signal, he refused to stop. He drove past. Based on the information, the bike actually hit a police officer on his hand. He fell from the bike and broke his leg. The police took him to the Milton Cato Memorial Hospital. The matter is being investigated currently.”

The police chief said he was not sure where exactly the incident took place nor was he aware that the mother had said that the motorcyclist is paralysed from the chest down.

“I don’t know about that. I can seek an update. Yesterday when it was reported to me, they said he had a broken leg. I don’t know of him being paralysed,” John said.

Weekes, who works at The Prime Minister’s Residence, found out about her son’s injuries when a friend told her that a nurse had called saying that Cjea was at the Accident and Emergency Department of MCMH.

When Weekes visited the hospital, Cjae “was there lying with a lot of bruises on his body,” she said.

The mother said that her son’s has a learner’s permit, which allows him to ride the motorcycle, which is licensed and insured, and was making the trip with another motorcyclist, one “Dusty”, of Georgetown, who was riding a separate motorcycle.

“I had the permit. And he said that the friend did not have a permit on him either so he didn’t want to stop for the police to harass them, because, you know, sometimes police can just thing you and do what they have to — beat you up or whatever, so he said they didn’t stop.”

Weekes said that while her son did not have the permit on his person, he had an “L”, indicating that he was a learner, affixed to the motorbike.

“Dusty was there but he didn’t know that they run over Cjea,” Weekes said, adding that Dusty visited her son twice in hospital.

“He only saw like when Cjae fell … because he was running away from the police.”

Weekes said her son told her that he went to Questelles to buy a motorcycle tyre, but it was the wrong tyre. He and a friend went to carry back the tyre, and Cjea was riding his motorcycle with the tyre around his neck.

She said that in Questelles “like when they (the police) start chase them, one of them give him one lash in his chest, like in the travelling vehicle that they in, and like he keep hustling with his bike until he reach up in a dirt road in Vermont and then that is when they thing him with their vehicle so he fall and he end up under their vehicle and wrap up.

“And when he wrap up, he underneath there and he saying, ‘Oh God, alyo ah kill me.’ He said they stopped and they pull him out. When they pulled him out they said, ‘Leh we take him to the hospital before he die on us.”

The mother said that when they brought Cjea to the hospital, there were no police officers with him and the hospital staff inquired about this.

“I talked to certain people and maybe they called the Commissioner of Police.”

Weekes said that a police officer came and inquired about her son.

She said the officer told her that he had come to transport someone to the hospital and the police in Questelles had “called to find out if the guy is here or if he died or anything like that.

“So I said, ‘How can they just say if he’s dead or anything? What happened? Are you the one who knocked him down?’”

Weekes said that the officer told her that he was not involved.

The officer then left and was relating to two workers at the hospital about what his colleagues allegedly told him, Weekes said.

Natiesia Weekes, Cjea’s sister and Natasha’s daughter, told iWitness News that she was at hospital between 7 and 8 p.m. Wednesday when the officer was relating to other people there.

“He said they cut into a dirt road and my brother fell off the bike and they threw him in the transportation and brought him to the hospital. And he was saying that my brother probably has a different story than the policemen.

“So I asked him, ‘Were you there?’ He said he was not there. So I said, ‘How you know how the incident happened?’ He said when the men came to the police station he heard about it

Meanwhile, Weekes said that four police officers from the Questelles Police Station came to the hospital, saying that they were looking into a report by other officers about the incident.

“They said four police officers reported a matter and said they were chasing two young men on bikes and when they chased them my son got into an accident.

“I asked them if that was all. He told me yes. I asked him if there was nothing more to that, he told me no and that is the matter that was reported.”

Weekes said that the officer asked to speak to her son and she told them he could not do so at the moment because he was in a lot of pain.

The mother said that the officers told her that her son’s motorcycle was at the police garage and it was in good condition – “nothing happened to the bike, it started and everything.”

She said that the officer spoke to the doctor, but no one from the police force had come since then to check up on her son.