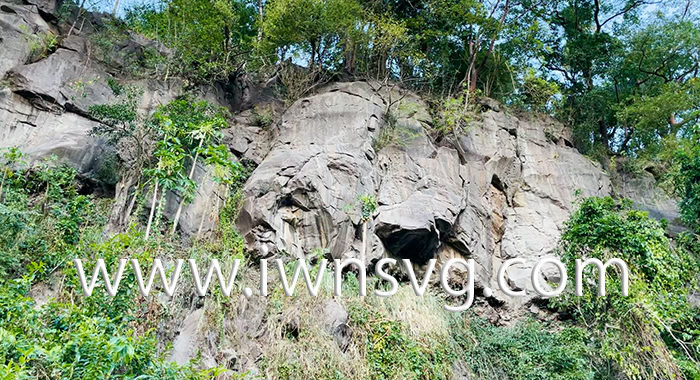 A section of the rockface in Richmond, where the quarry is to be built.

St. Vincent is much like a pile of rocks with fertile soil on it, Prime Minister Ralph Gonsalves said on radio as he defended his government’s decision to lease 58.8 acres of land to a St. Lucian firm for 30 years to operate a stone quarry.

“Look, in common language, St. Vincent has so much stone, we’re like a big stone heap with good soil covering it over the years,” Gonsalves said Friday on his party’s radio station.

“And there are places which are very suitable for quarries, economical and you can get the better quality stones for the purposes of the quarrying… I’m not an expert in those areas, clearly, but I’m told that’s a very good site. And you’re going to create a lot of employment and vital for the construction industry…

“So, this is all part of the development of the country.”

The prime minister was speaking one day after residents of North Leeward, including farmers who will be displaced, objected to the quarry and the manner in which the work started without any public information consultation.

He said that the farmers, who were cultivating the lands — which the government owns — under a leasehold agreement will be relocated.

Gonsalves said that when his government was working on the geothermal energy project, there were farmers that had to be relocated.

They were compensated, he said, adding that in the case of North Leeward, the government might have other lands in the area to which the farmers can be relocated.

“I’m sure that that issue would have come up [at Thursday’s meeting]. I raised it with Sabby (Minister of Agriculture, Forestry, Fisheries, Rural Transformation, Industry and Labour, Saboto Caesar) and Carlos [James, MP for North Leeward and Minister of Tourism, Civil Aviation, Sustainable Development and Culture] and I raised it to the Chief Surveyor, too, when I indicated to him when he was going down so I don’t know if that has been accepted or whatever — but you notice the spirit in which I’m talking.”

The prime minister said that he could not promise that farmers would get replacement plots of the same sizes as they currently occupy.

“And you may have five acres and you get three, but the three which you have might be more valuable that the five that you had. So all of those things, but those are particular details. But I want to give them the assurance that they’d be properly compensated for their crops,” Gonsalves said.

“I believe that there are some lands which are already in state hands which had been allocated hitherto with leasehold and nobody had paid anything at all and in many cases people abandoned the land.

“So, those are matters which the chief surveyor would have to advise that. But, you see where we are in terms of always dealing with the consultations…

“And I want the persons who are involved, the 12 or so farmers, to take my word on that.”

He said that the quarry is a “large project”.

“One of the advantages of the project in that area is that it wouldn’t affect, as far as I’ve been advised, people with the nuisance with the dust and all the rest of it. And it’s located where they can build a jetty — small jetty — so that they can barge stuff.”

The prime minister reiterated that the country needs the material that the quarry would produce.

“… this is private-sector-driven, which is regulated through the state,” he said, adding that there used to be stone crushers in St. Vincent.

“Of course, it did some bad things too because people took stones from in front of particular areas which they should not take them in relation to the sea being facilitated in eroding the coast. But you’re dealing now with an actual quarry.”

Rayneau Gajadhar, a St. Lucian businessman, whose firm has been awarded the lease, has told iWitness News that 99% of the aggregate produced at the quarry will be exported.