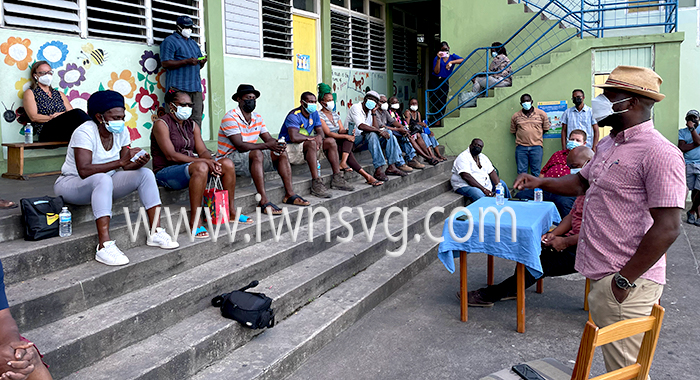 Leader of the Opposition Godwin Friday had dismissed as “lame excuses” the explanation given by the government as to why residents of North Leeward were not consulted about a quarry being set up in Richmond.

“Either way, they are failing miserably, the people in North Leeward. And when that happens, and you see people in the community stand up, and they say, ‘Well, listen. I am a member of this community, people look up to me for leadership, I cannot let them down in the most basic thing, at least, that we can do, which is to demand that we be respected, to demand that the government and the people who are involved in this project come and explain to the people what is going to happen so that the people can have a better sense as to what the project entails, whose lands are going to be affected.’”

On Jan. 29, farmers in the community were surprised by news that tractors owned by Rayneau Gajadhar were ploughing through their fields on the slopes of the headland that separates Fitz Hughes and Richmond.

Gajadhar, a St. Lucian businessman, told iWitness News at the site that the government has leased him 58.8 acres of land for 30 years for the operation of a stone quarry.

However, farmers expressed surprise at the development, saying that no one consulted or informed them.

Last week Monday, Feb. 2, MP for North Leeward, Carlos James, who is also minister of tourism, civil aviation, sustainable development and culture, said that a public meeting had not been held with constituents because of the COVID-19 pandemic.

However, at a public information session in Chateaubelair last Thursday, Minister of Agriculture, Forestry, Fisheries, Rural Transformation, Industry and Labour, Saboto Caesar, said that the meeting could not have been held sooner because the technical work by public servants had not been completed.

Friday told his radio audience that when residents are provided with information, they could make a better judgment about the pros and cons of the project.

“But with no information at all, they’re left in the dark,” he said.

He said that the message that was being sent was: “‘Take it or leave it, this is what we are going to do and you can’t stop us because we have permission from government.’

“And government says, likewise, ‘You can’t stop us because we have power. That is not a democracy. That is not the way in which you function in the interests of the people…

“… if you don’t have the courage to come to the people and say, ‘This is what we’re going to do’ and to hear their views before, why you wouldn’t do it? Because you think that they’re going to oppose it? That is where you have to test your ideas.”

The opposition said that when a government bulldozes people with its ideas, it shows that the government has power but not strength.

“What it shows is that you are weak because you can’t test your ideas. And all you’re using is just basically the power of the office to ram things through.”

Friday said that he was happy to hear that North Leeward residents “have stood up and said, ‘No! No! No! No! You might be, Mr. Minister, you might be Mr. Government. I see you represent the government but we are the citizens of this country, we are the people of this community, we are the ones who are going to feel the brunt of this. You can’t disregard us in the process.’”

The opposition leader said that the language he heard from the ministers at Thursday’s meeting was disrespectful to the people.

“You can’t diss people like that you can’t just simply say, this is something that we are going to do, we know what is best for you.”

He said what has happened is that residents learnt that were tractors making roads through their farms.

“… you only watching like a spectator, as things are happening in your community that you know are going to affect your life going forward and nobody has the decency to consult with you?”

Friday said that a fundamental principle of his New Democratic Party is that the people must be consulted.

“… the first question is a simple question. How is this going to benefit the people, first of the community where the project is?

“… and then you have to detail it and make up in your mind that whatever the costs are, that they are far outweighed by the benefits for the people.”

The opposition leader said that from what he is hearing about the quarry project, is that the project – the clearing of land and setting up — is without any consultation with the people.

“I mean, that is the height of disrespect. We are not living on somebody’s plantation,” Friday said.

He said that while the farmers might have leased the land from the government,  “There are crops planted there, intensively cultivated lands, with cocoa with citrus, with cassava, with various other crops that are there.

“And no regard is being paid whatsoever to those persons to say, ‘Well, listen, this is what is going to happen. Tell me what you think.’

He said that the situation was similar as in Buccament Bay, where lands were taken from farmers and used for hotel development.

“And they always feel because people in this country, they’re struggling and … they feel that people are hand-to-mouth that whatever they can do, we can solve it just by throwing a few dollars.

“That is the attitude they’re going to bring to it and try to think that this could mollify people. But these are things that we cannot allow to continue unchecked in our country.”

He said that farmers are committed to their crops, whether or not they make money from it.

“… because you see that it’s growing, it’s coming the way you want it to come. Eventually you try and sell it and make a dollar. But even if they can’t, people still take pride in what they do because we have that connection to the land.”

“And then you just go and totally disregard it, you’re driving through, you’re putting road through it, telling people you have five acres of land, yeah, 10 acres or whatever you have, change your mind about this, because you’re not going to be able to continue to cultivate the way of the past 10, 15, 20 years. That is not right.”

Friday said he was told that between 12 and 15 famers are directly affected.

“…  but we are going to verify. We’re going to get information from our own visits to the area at the appropriate time.

“And we are going to make sure that the people know that they are getting support from the New Democratic Party because we believe that they have a right to be heard,” he said.

The opposition leader said that his party has stood up for people in this regard, ‘”whether it’s with the [COVID] vaccination policy of the government telling people you have to put a vaccine in your arm or you lose your job…”

He said that the attitude of the government is that when people start making noise about an issue, “you throw a few dollars at them, and they feel that that is going to be sufficient.

“We can’t disrespect people like that and then you come around election time and saying that citizenship is the highest office of the land and you want to be able to ask people for the vote because you think it is so important.

“Well treat them like citizens in between as well. Respect their opinion, their worth, their dignity. And that is not happening here.

“And I’m glad to see that people of North Leeward are saying. ‘No! No! No! You’re gonna have to stand up and explain yourself to us. From what I heard from that meeting that they had last Thursday … it sounds like the people, they are saying, ‘No, we have a voice too.

“‘And so whether you want to come in a town hall meeting or you want to do by whatever means, it should have been done before. But we will insist upon it now that we know what is happening that the project is not going ahead without our input’,” Friday said.