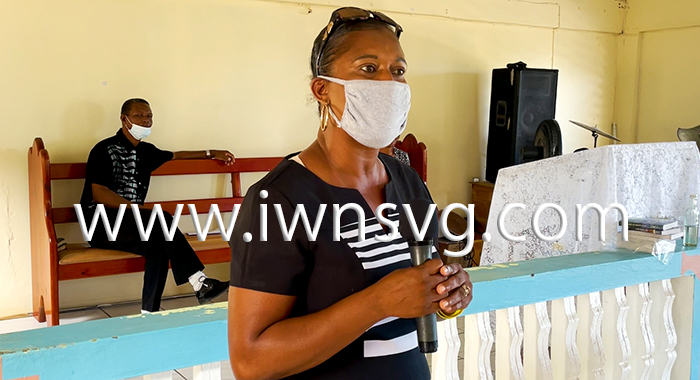 Opposition Senator, Shevern John speaking at the funeral in Owia, her home village on Saturday, Feb. 5, 2022.

Opposition Senator and Owia resident, Shevern Lewis-John is urging residents of the North Windward village to live lovingly with each other, as the death angel seems to be hovering over the village.

“As we in this village settled back after the eruption — the eruption didn’t take any lives, we thank God for that — but after we’ve gotten back into our community, we have realised that the death angel has been calling on a lot of people,” John said at a funeral on Saturday.

The government gave the all clear last August for residents of Owia to move back to the community following the April 2021 explosive eruption of La Soufriere.

About 15 residents of the village have died of various causes since then.

John’s comment came as she paid tribute at the funeral of Vallie “Water Grass” Hoyte, 55, who died on Jan. 17 — 33 days after his 80-year-old mother, Gracie Williams.

“A number of our homes — everyone of us in Owia has been affected by death after the eruption,” said John, a former educator, who failed to win the North Windward seat for the opposition New Democratic Party in the November 2020 general elections.

“And it leaves us a message that at any time your appointed day will come. And it is your time to live for Christ, live peaceable with each other. We have been having too many divisions,” the senator said.

John said that the deceased man lived a life that brought people together.

“And I am sure this is what he would have loved his family to do and to continue doing: live peaceably with each other.”

Meanwhile delivering the eulogy, journalist Rochelle Baptiste, who is also a resident of the community, joined with John in urging unity in Owia.

“Senator Lewis puts it best. It seems as though every weekend we are having one or two funerals… Death is over our village and, as she rightly said, you never know when or where it will strike us so we all have to live well with one another.”