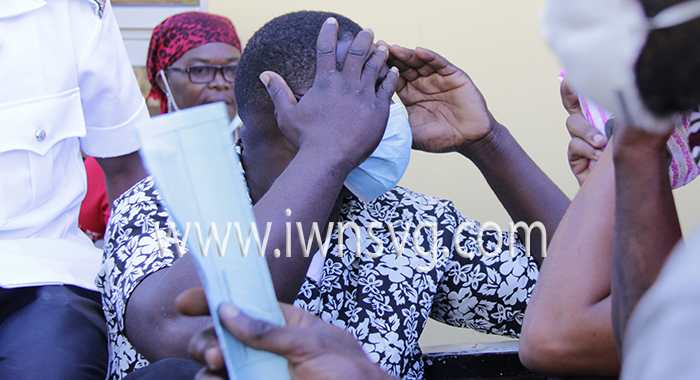 The defendant, Damian Glasgow hides his face as he awaits transportation to prison on Thursday, Feb. 10, 2022.

The 33-year-old mechanic who, on Jan. 31, took a licensed firearm holder’s pistol from his vehicle and discharged three rounds in the air has been ordered to pay EC$11,500 in fines to avoid further jail time.

Damian Glasgow, of Glen, had to pay EC$4,000 forthwith or go to prison for six months.

Chief Magistrate Rechanne Browne handed down the sentence at the Serious Offences Court, on Monday, having remanded Glasgow to prison over the weekend.

On Thursday, Glasgow pleaded guilty to charges that on Jan. 31, at Calder, he had in his possession a 9mm pistol without a licence and that he discharged a loaded firearm in a public place, to wit the Calder Public Road.

The facts of the case are that around 1 a.m. on the date in question, Carl Davis, of Richland Park, who holds a licence to keep a pistol and 50 rounds of ammunition, went to Judge’s bar in Calder.

He had the firearm in the vehicle, fitted with an extended magazine loaded with 31 rounds.

As Davis was walking away from the vehicle, he met Glasgow who hugged him, lifted him up and said, “I haven’t seen you in a long time.”

Davis went into the bar to get a lighter to smoke.

Glasgow then went to Davis’ vehicle and removed the firearm and discharged three shots into the air.

While Glasgow was standing just outside the vehicle with the firearm, uniformed SSU officers were in the area arrested him.

In handing down her sentence, the chief magistrate quoted the opening lines of Charles Dickens’ novel, “A Tale of Two Cities”.

She said that the video footage which the court saw on Friday, showed two types of behaviour: professional and wise; foolish and reckless

Browne spoke of the swift response of the Special Services officers, Police Constable 482 Edwards, in particular, who was the first to exit their vehicle, firearms trained on Glasgow as they came upon him as the firearm was being discharged.

She said that Edwards had exhibited “quick, careful professional policing”.

Browne said that what the video showed was “even more worrying” in that the licensed firearm holder pull up in a no parking area, exited the vehicle with the windows down and move to people with his back towards his backwards his vehicle at an active bar, having left on the seat of the vehicle a 9mm firearm loaded with 31 rounds of ammunition in the early hours of the morning.

The chief magistrate said that this was “a most irresponsible and reckless act and causes concern to be raised as to the competence of persons to carry sometimes licensed weapons”.

The magistrate noted that the defendant and the firearm holder shared an excited embrace of friends who had not seen each other for some time.

She said there was an exchange of words, after which Glasgow “totters” toward the vehicle, peeps in, takes out the firearm and discharges it after seemingly looking at it curiously.

She asked what would have happened had someone passed and taken the firearm before Glasgow.

“This situation could have gone wrong so quickly,” she said, adding that the court strongly believes that Glasgow was told that the firearm was there and did not just go to the vehicle.

She said that the fact that the defendant was intoxicated did not help the situation.

Browne said that each case must be taken on its merit, and noted the sentencing guidelines.

She said that mitigating features of the case were Glasgow’s genuine remorse and that the came into possession of the firearm under the direction of the owner.

Other mitigating features were his good character and his dependant children — ages 3, 5 and 7.

She noted that Glasgow had spent four days on remand, adding that the court did not intend for this to be the beginning of a custodial sentence.

For discharging the firearm, Glasgow was ordered to pay a fine of EC$2,000 forthwith or spent three months in prison.

For possession of the firearm, he was fined EC$9,500, of which $2,000 was to be paid forthwith or three months in prison.

He has to pay the balance by Aug. 1 to avoid an eight-month prison term.

The chief magistrate again commended the officer, saying, “When police do well, they must be highlighted.”

Station Sergeant of Police Renrick Cato, who prosecuted the matter, had proposed a 21.8-month prison term, or a fine of EC$8,340.

Grant Connell appeared for the defendant and Ashford Wood, one of Glasgow’s former teachers, appeared as a character witness.