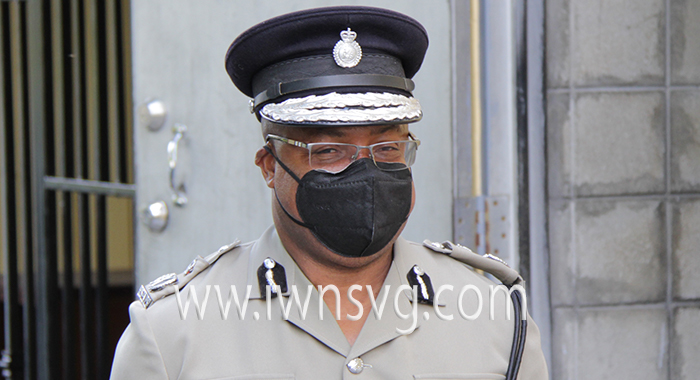 Commissioner of Police Colin John has told the court that he did not leave his office on Aug. 5, 2021 to go onto the streets to harass protesters.

He made the point during cross examination on Feb. 9, in the case in which Ken Findlay, 34, of Belair, is charged with three traffic offences in relation to the anti-vaccine mandate protest.

The charges are in connection to Findlay’s alleged failure to give his name and address to a police officer, failing to remove his vehicle when instructed to do so, and causing obstruction to traffic.

The police chief and the investigating officer, Sergeant of Police Wendell Corridon, were the only two witnesses to testify on behalf of the Crown.

In his evidence in chief, John, a lawyer and former assistant director of public prosecution, told the court that he was on duty on the date in question, when he told Findlay to remove his van.

The police chief said that the defendant failed to comply, so he pulled him out of the vehicle and handed him over to another police officer.

John further said that Findlay failed to give his name when asked to do so.

During cross examination, the commissioner of police denied leaving his office to go and harass New Democratic Party supporters and other people demonstrating against the actions of the government.

“I came on duty outside the courthouse,” he told the court.

“So you are telling us you personally left your office and came on duty at the demonstration on that day?” Bacchus-Baptiste said.

He further told the court that he considered that a good way to pass time as commissioner of police.

The lawyer put it to the commissioner that he went to the area “armed with … bad blood” and met about 14 vans parked in the street that day.

“When I came there, you had five vans there,” John said.

He said he was not aware that those vans had been driving around Kingstown prior to when he went outside the courthouse.

The lawyer put it to the police chief that when he arrived on the scene, there were three vans in front of the defendant’s and a couple others behind.

“In other words, pinned in by traffic,” Bacchus Baptiste said

“Your honour, when I arrived on the scene, there were about five vans there. I spoke to the vans directly in front of HW661. They moved off. When I approached Mr. Findlay, there was no other vehicle in front,” John said.

But Bacchus-Baptiste said that this was not the case and that the police chief felt that because he appeared in court in his official capacity the court would believe him.

“I came as an ordinary truthful witness,” John said.

John denied knowing the defendant very well, telling the court that he knows Findlay’s face but not his name.

He also said he has seen the defendant in Belair but does not know where he lives.

“I am putting it to you that you and him picnic together, sat down and drink,” Bacchus-Batiste said.

“Everyone you picnic with you know their address?” John said.

He told the court that he learnt the defendant’s name after the charges were laid, which, according to the charge sheet, were laid the following day.

He said that the charge relating to failing to give his name was brought against Findlay the week before the trial.

She put it to him that the charge was laid six months after, as an afterthought.

However, John said that from his “learning, that seems to be a double-barreled question.

“So I want to know which of the questions I should answer,” John said.

The chief magistrate said that she did not think that the witness could answer the question about the charge being laid as an afterthought.

The police chief then said that based on his calculation, six months had passed between the incident and when the charge relating to failure to give his name was laid against Findlay.

The lawyer put it to the police chief that when he told the defendant to move the van, he replied, “Can’t you see there are van in front me and I can’t move?”

“And you said, “Yo nah hear me say move yo van’ in a very aggressive manner.”

I may have said that,” John told the court.

“Whereupon, the lady who was sitting there, said, ‘Colin John, that is how you speak to people?’” Bacchus-Baptiste said.

“No one said anything to me, your honour,” John said.

“Whereupon you, Mr. John, opened the van door and said, ‘You nah hear come out?’” the lawyer put it to John.

“I opened the van door, I asked Mr. Findlay to remove, he refused and I pulled him out of the van.”

“You pulled him out of the van, hit him in the chest, and grabbed up the t-shirt,” Bacchus-Baptiste said.

“Then he said to you, ‘What all this for?’ He knows you, Mr. John, and was very surprised,” Bacchus-Baptiste said.

“I asked him for his name and address. He refused. I pulled him out of the van, told him he was under arrest and handed him over to a police officer who took him to the Central Police Station.”

John told the court that there were in excess 50 police officers at Market Square that day.

“So you will bring in excess of 50 to prove your case? You are not relying on your word alone?” Bacchus-Baptiste fired back.

He said he could not recall which officer took Findlay to the police station but it may be recorded somewhere.

He, however, could not say at what time exactly.

He said there were people at Market Square around 5 p.m., when the incident took place.

Asked if it was a large number of people, the police chief said, “Large is relative.”

“And that you were being malicious and malevolent to the defendant simply because you were upset by the large demonstrator,” Bacchus-Baptiste said.

“Which of the questions should I answer?” John said.

After some back and forth between the defence counsel and the court, John said that he was not being malicious.

“You think this is Facebook where you can speak in broken English and attack people?” Bacchus-Baptiste said.

John said he was not upset because of the large number of NDP supporters present.

The lawyer asked the police chief if he recalled her approaching him immediately after the incident and asking him why had assaulted her client.

“I told you I was busy dealing with my men and to excuse me please,” John said.

“Colin, put your hand on the Bible and say that,” Bacchus-Baptiste responded.

The chief magistrate, however, said that the court was not going to be engaged in such theatrics

“She told me I walked off on her. I told her, ‘Who are you for me to walk off on?’” John said, adding that he told the lawyer that he did not assault anyone.

John denied calling Findlay by name on the date of the incident.

“And when I asked you what did he do, you suck your teeth and walked off on me in public with other officers standing there, including Scratchy. You consider that to be good behaviour for the COP with me inquiring about my client?” Bacchus-Baptiste asked.

“I was dealing with my men. I had equally important things to deal with than to entertain counsel at that time,” John said.

Bacchus-Browne said that the police chief would next tell the court what were the equally important things he had to attend to.

At this point, the chief magistrate said that the commissioner had said that he had equally important things.

Browne said she could not see the relevance of the question.

“You are making my job ten times harder,” Bacchus-Browne said, an allegation that the chief magistrate denied.

“I will sit down,” the lawyer said.

“I take it you are finished with your cross examination,” the chief magistrate said.

“It doesn’t make sense because you are interrupting me all the time,” the lawyer responded.

Meanwhile, Corridon told the court that he was on duty at the Traffic Department when he received a report against Findlay, driver of HW661.

The officer said he met Findlay there and as a result of the report, charged him with two charges.

Then, on Feb. 4, he met Findlay at Richmond Hill and he was taken to CPS, where he was also laid another charge against him.

He said that the report against Findlay was in respect of obstructing traffic and failing to remove his vehicle on Aug. 5, 2021, where there was a protest in the area of the High Court.

The Feb. 4 charge also stemmed from the Aug. 5 incident, where Findlay failed to give his name and address to a police officer in uniform, Corridon told the court.

During cross examination, Bacchus-Baptiste asked Corridon whether Findlay had complained that the police chief had struck him a blow to the chest.

“At no point he reported that to me,” Corridon said.

The investigator said that the police chief wrote his own statement in relation to the incident.

Corridon said he is in charge of the investigation.

Asked why it took six months to bring a charge of not answering to his name, Corridon said, “The file was reviewed and instructions were to lay that charge.”

“You interviewed no one else, you just relied on the COP’s word?” Bacchus-Baptiste said.

“Based on what was reported to me…” Corridon was saying when Bacchus-Baptiste asked him “By whom?”

“I interviewed no one else but the commissioner of police.”