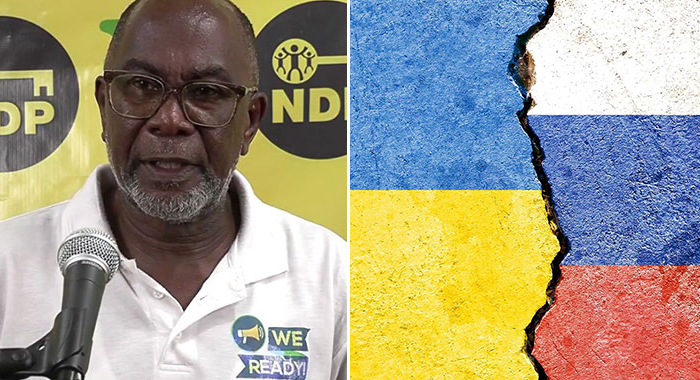 Leacock, who has military training and attained the rank of major in the St. Vincent and the Grenadines Cadet Force, said on radio that Vincentians in the United States and the United Kingdom armed forces may be sent to the battle front.

In his comments one day before Russia invaded Ukraine, Leacock further noted that the conflict could disrupt the food supply chain and affect the supply of oil, resulting in higher prices at the pump and larger electricity bills in SVG.

The opposition lawmaker called out the Ralph Gonsalves government over its silence amidst the conflict, saying that Kingstown should condemn Moscow’s aggression.

“St. Vincent and the Grenadines, at the moment, at least as best as I am hearing, has given, is giving or is paying little attention to the international situation of the war that is virtually in progress already between Russia and Ukraine,” Leacock said in his weekly programme, , on Wednesday, hours before the invasion.

He said that not so long ago, SVG was boasting about its status on the United Nations Security Council.

In December, SVG, completed a two-year term as a non-permanent member of the UNSC, the smallest country to ever occupy the post.

“It’s not gone and forgotten so that supposedly, the clout, the contact, the reach that we had established is still available and of relevance.”

He noted that SVG has diplomatic relations with Russia and boasts of its membership of the Non-aligned Movement.

“Vincentians are all over the world, including in Russia, where there is great discrimination and black people, generally speaking, are treated contemptuously in racist Russia,” Leacock said, adding that the security of Vincentians in Russia is a matter of concern.

He, however, noted that a significant number of Vincentians are members of the British Armed Forces, enrolled primarily in the army and navy.

“The United Kingdom has mobilised to send troops to Europe through its membership of NATO (North Atlantic Treaty Organization). And so, you would expect and understand there would be Vincentians on British warships and Vincentians on the ground awaiting deployment notification from the UK commanders in support of NATO’s position in the Russian-Ukraine war.”

He said that while the situation is not quite the same, there are also second and third generation Vincentians enlisted in the United Kingdom.

And, many Vincentians in the United States armed forces are stationed in Germany “and many of them have also been deployed and  put under the command of the NATO force,” Leacock said.

He said that while the United States says it will not get directly involved in the conflict,  “you can reasonably anticipate that sooner rather than later, NATO forces will be physically involved in that war”.

The opposition lawmaker said that like him, there are many Vincentians families with children or grandchildren who are serving and are now in harm’s way.

“What happens between Russia and Ukraine matters and it is more than likely that in that situation if any lives are lost of any Vincentians — and this is not being alarmist — it would be the Russian forces that will be endangering the lives of Vincentian nationals in that pending situation.”

He said that SVG has to continue to be interested in diplomatic initiatives and “in the fact that in that situation it is our people, our children, our flesh and blood who are at risk.

“And Ralph’s diplomatic connection and sojourn with Russia and his deadly silence on the matter doesn’t cut it,” Leacock said, referring to SVG’s prime minister, Ralph Gonsalves.

“I would like to call him out and hear him out because what is in fact taking place between Russia and Ukraine is bullying of the highest order, where Russia continues to want to feels it can’t continue to recognise international boundaries and might is right. We can’t support that…”

On Friday, Gonsalves, who is in Qatar on official business, commented on the situation in Ukraine, saying that his government has contacted the seven or eight Vincentian students in Russia.

The prime minister spoke about the implication for commodity prices, saying that Russia and Ukraine produce about half of the world’s wheat.

He said he had written to Russia’s President Vladimir Putin about the conflict, but did not disclose the content of the letter.

Gonsalves invoked the CARICOM statement on the matter but offered none on behalf of his government about the conflict.

However, in his comments on Wednesday, Leacock said:

“The fact that NATO is also positioning troops, which include Vincentians in those parts of the world, is something that Vincentians should be very keen on and we may have to take a position.”

He said that there are “other international ramifications in what is unfolding”, adding that he has had private conversations with the president of the opposition New Democratic Party, Opposition Leader Godwin Friday on the matter “so I limit that to that extent thus far.

“So that is where life and limb is concerned and the international public service of our people. You may even have nurses being involved.”

Leacock said another implication is that Europe, Germany in particular, in supporting NATO, “is going to cut off the oil links between themselves and Russia.

“When all that happens, it makes the oil market go into jitters. And oil, which has already been on the rise, will rise even faster.”

He said that as had been happening in the United States, where the price of oils has been climbing at the pumps, “in St. Vincent and the Grenadines that diesel and fuel at the pumps, if this thing explodes, will ratchet up and we may have to pay more for our transportation on a daily basis.”

He noted VINLEC, the local electricity generator, does not purchase oil by hedging. Leacock, said that consumer “may have to pay more on the fuel surcharge as the price of energy increases.

“So it’s our people exposed, our cost of living will be affected and livelihood, generally speaking, and issues with the whole supply chain, which we are already facing with prices going up in the supermarkets; our export opportunities, all of those things come into play in this subject matter. So it is not a small matter and our leaders must be prepared to speak to and address those issues in a way that we, Vincentians, can follow.”

Leacock said he remembers how he was derided when he had warned Vincentians about the possible fallout from the COVID-19 pandemic.

In March 2020, Leacock said on radio that he had received public health and medical advice suggesting that as many as 50,000 Vincentians could be affected by COVID-1 — 2,000 of which “will” lose their lives.

Leacock said: “… but the impact it has had on our economy over the last two years, I was quite correct to raise the alarm bells. And you see how much it has damaged Vincentians society.”

He said that the government of SVG needs to make a statement on the Russian-Ukrainian war “and alert Vincentians to its implications and not to be silent in condemning Russia’s bullying in that theatre because that action is, in a sense, embarrassing to this government that does not believe in democratic traditions and constitutionalism and international conventions and Vincentians must let them know that we are looking on and we are more than concerned about what is unearthing and unfolding in that part of the world”.