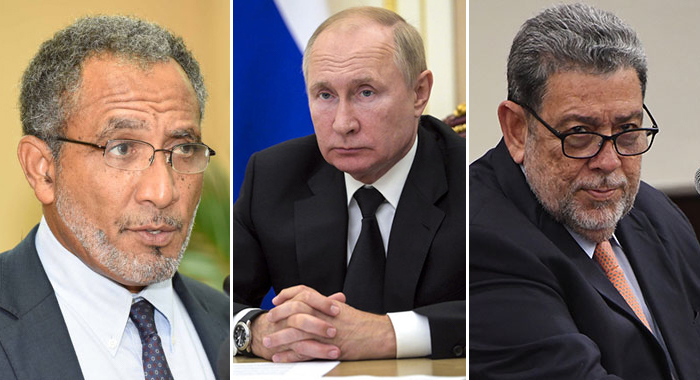 “… there is no private affair. This is a public matter… As I say, he’s not writing a letter to a pen pal friend,” the opposition leader said on radio on Monday.

Gonsalves said that he “may or may not” disclose the contents of the letter and if he does, it would be when he chooses.

CARICOM, of which St. Vincent and the Grenadines is a member, and other individual members of the bloc, have condemned the Russian invasion.

However, Kingstown, in its contribution to a special United Nations debate on the matter, on Tuesday, used the Russian description for the conflict: “social military operation”.

In her speech, Ambassador I. Rhonda King highlighted the principles of the UN Charter and called for an end to the war.

Speaking one day earlier on his weekly radio programme, Friday spoke about the prime minister’s motivation for sending the letter and not revealing its content.

He said Gonsalves does not want to release the contents of the letter, in case it contains “anything Putin might take offence at”.

The opposition leader said that Gonsalves’ approach showed “a total disrespect for the people of this country.

“It says that … this is a matter between me and my buddy Putin, like they’ve done with our relations with the other dictators in the region here, whether it’s Chavez or Maduro, that this is between us so the people of St. Vincent and Grenadines have no stake in this.”

He noted that SVG completed in December a two-year term as a non-permanent member of the United Nations Security Council.

“… these matters would have been discussed because the Ukraine crisis did not just emerge, it had been percolating, it had been ebbing and flowing up and down for the last eight years or so.

“… So having a position, a stance cannot be one that you have to mull over and see what the facts are and figure out what’s actually on the ground, and so forth.”

He said that issues such as the Russo-Ukrainian conflict are “apparent” to the international community and should have been for SVG also.

“Instead, what we are hearing is Gonsalves saying that he has written a private letter to Putin. What happened, they are pen pals?” Friday said.

“I mean, this is so ridiculous. This is something that requires a statement from the country not exchange of letters between individual leaders,” he said, adding that people want to know SVG’s stance on the matter.

“They don’t want Putin to know, alone, what our stance is. The world wants to know …, our Caribbean neighbours want to know where we stand on this.

He said that the conflict has implications for Vincentians serving in the United States and United Kingdom armed forces who have been deployed or will be deployed as part of NATO forces.

Friday said that SVG has a direct interest in saying that the invasion must stop and the sides return to diplomatic negotiations and find a peaceful resolution.

“This is something that has broader implications as we said. We’ve  heard that many other persons have talked about this,” he said, mentioning the loss and disruption of lives.

“So the government of St. Vincent and the Grenadines … can’t sit on a fence on this matter.

The opposition leader said that as a small country, SVG cannot influence, in a military way, the affairs of the international community.

“Not even the sanctions that we can impose will have any serious impact, but they will have symbolic value.

“Our voice then is one of a moral position that we take. We must be a voice for morality, international peace and stability, and support against aggression.