‘We must stop this war,’ SVG tells UN 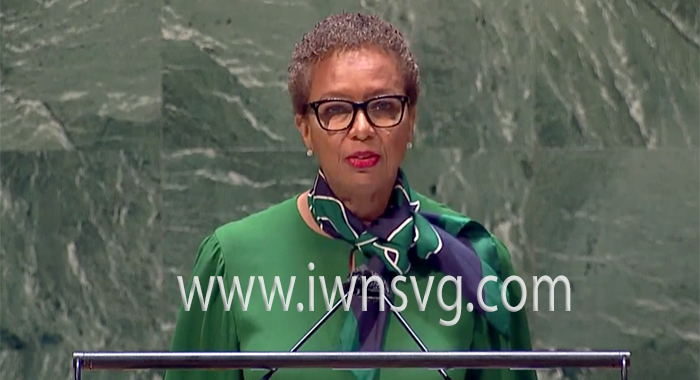 A screenshot of Ambassador I. Rhonda King addressing the United Nations on Tuesday, March 1, 2022.

St. Vincent and the Grenadines on Tuesday called for peace in Ukraine, even as it adapted the language of Russia, describing as a “special military operation” what many nations have classified as Moscow’s invasion of Ukraine.

Addressing an emergency special session of the General Assembly, the 11th in the body’s 77-year history, I. Rhonda King, SVG ambassador to the United Nations, said that Kingstown was monitoring the escalation of the conflict and was deeply worried by the deteriorating situation.

“From our perspective, the special military operation is neither necessary nor desirable, and is an affront to the United Nations Charter,” she said.

“The special military operation, however, cannot reasonably be justified. It only endangers international peace and security and will exacerbate human suffering across the globe. Let us be clear, no member state of our organization will be immune from the ripple effect of this armed conflict.”

King said that SVG is unwaveringly committed to the purposes and principles of the United Nations Charter, including those relating to Article 2(4), which prohibits the threat or use of force against the territorial integrity or political independence of any state, as well as non-interference in the internal affairs of states and the right to self determination.

“Our existence as a sovereign, and independent small nation is owed to the international, sacrosanct, norms and non-negotiable, timeless principles,” said King, who represents that smallest nation to ever sit on the UN Security Council.

“Accordingly, we cannot stand askance, while the bedrock principles of international law are being jettisoned, and call for the immediate cessation of all hostilities.”

“Equally, we reiterate the recent calls made by the Caribbean Community (CARICOM) and the Organisation of Eastern Caribbean States (OECS) for the peaceful settlement of disputes and the respect of Ukraine’s sovereignty and territorial integrity.”

She said that Russia, historically, has been a defender of the purposes and principles of the United Nations Charter, inclusive of the sacred principle of the peaceful settlement of disputes.

This is emblematic of its membership in The Group of Friends in Defense of the Charter, King said.

“As a fellow defender of these principles, and member of this group, St. Vincent and the Grenadines unequivocally insists that the Russian Federation cease its military operations and immediately withdraw his forces from Ukraine.

“On countless occasions, we have witnessed the insidious effects of interventionism and external aggressions across the developing world. And we know that constructive dialogue in adherence to international law is the only path to peace and progress, however difficult that path may be.”

The diplomat said that SVG deeply regretted that the Minsk agreements — a series of international agreements that sought to end the conflict between Russia and Ukraine — were violated.

“We also make an appeal for meaningful diplomatic initiatives, and encourage the furtherance of the work of the Normandy format, the Trilateral Contact Group, and the Organization for Security and Cooperation in Europe,” King said.

“We urge the parties to exhaust all diplomatic efforts to find a peaceful solution to the current conflict. We firmly believe that the nobility of peace is far preferable than an ignoble military adventure. History has taught us that peace is a great cause, and great causes have never been won by doubtful men and women.”

She said that Kingstown was encouraged by the recent meeting on the Belarusian border between Moscow and Kiev.

“… we must put on record that the use of nuclear weapons is inconceivable and wholly unacceptable. We counsel against the mere suggestion by anyone. We counsel further that space for continued dialogue must remain open.”

President Vladimir Putin has put Russia’s deterrence forces, which include nuclear weapons, on “special alert” because of “aggressive statements” by the West, amid widespread condemnation of his invasion of Ukraine.

King expressed “dismay” at “the disturbing reports that people of African descent are being singled out for unfair treatment as they join the masses fleeing the Ukrainian territory.

“In line with international humanitarian law, and its guiding principles, we call on all states to uphold their international obligations and ensure the safety of all people,” King said.

“St. Vincent and the Grenadines repeats that it is a stout champion of the purposes and principles of the United Nations Charter and their primacy in our multilateral systems. We must, and I repeat, we must give peace a real chance to succeed. We must stop this war and return to diplomacy,” King said.