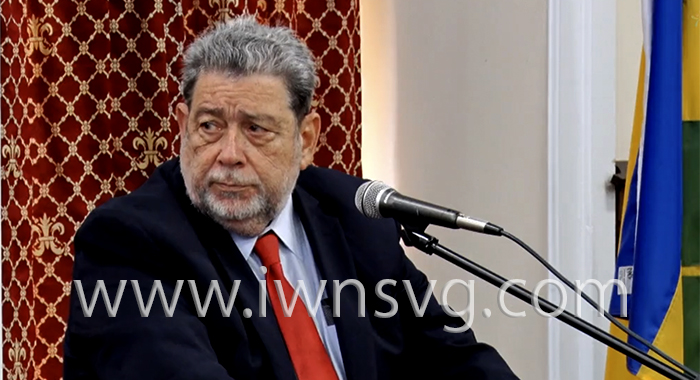 “As a longstanding friend of the Russian Federation, St. Vincent and Grenadines is deeply disturbed at your government’s initiative of a special military operation in the territory of Ukraine, an independent republic,” Gonsalves read.

There have been repeated calls by the parliamentary opposition, including Leader of the Opposition Godwin Friday for Gonsalves to release the contents of the letter.

The prime minister has said he “may or may not” release the letter and that he would do so at a time of his choosing.

He said on his weekly show on state-owned radio on Wednesday that he was giving the announcer a “scoop”.

In the letter, Gonsalves told Putin that the government of SVG  understood “your articulation of the legitimate security considerations of the Russian Federation and your perspectives on the political situation in the region of Donbas, inclusive of the declaration of the Donetsk People’s Republic and the Luhansk People’s Republic”.

Gonsalves, however, said that Putin’s government stance on the matter at hand, “taken at its highest in your favour, cannot reasonably justify the special military operation upon which Russia has embarked.

“Self evidently, the metaphoric horse and chariot have been driven through the chatter of the United Nations.”

He said that historically, the Russian Federation has been “a staunch defender” of the Charter of the United Nations, inclusive of “the sacred principles of multilateralism, the peaceful settlement of disputes, sovereignty and independence, non intervention and non interference in another country’s internal affairs.

“As a fellow defender of these principles, as a witness to the insidious effects of interventions and external aggressions across the developing world and as a small island state whose independent existence depends on faithful global adherence to the letter and spirit of the United Nations Charter, St. Vincent and Grenadines is urging your government to reflect with solemnity and reasonableness on these principles and others and see the special military operation.”

Gonsalves told Putin that he had been listening carefully to the views of the leaderships of countries globally.

“From our perspective, the special military operation is neither necessary nor desirable.”

The prime minister told Putin that “the special military operation” would  “undoubtedly add much suffering to ordinary folks the world over, especially those who are still finding it very challenging to handle a pandemic, climate change and natural disasters.

“The people of St. Vincent Grenadines and the Caribbean will undoubtedly be affected adversely. Please, let us give peace and diplomacy a real chance to succeed.

“In our view, the nobility of peace is far preferable than an ignoble military adventure.”

Gonsalves said he was aware that some Western countries were “engaged in the hypocrisy and doublespeak, and their history of neocolonialism, imperialism and interventionist adventurism undermines their self righteous proclamations, but their ongoing agendas and self righteousness ought not to induce other dangerous errors, such as the special military operation in Ukraine.

“At a personal level, as a friend of the Russian Federation, I am urging you very strongly to cease the special military operation in Ukraine.

“Peace is a great cause and great causes have never been one by doubtful men and women. I have full confidence in you, a distinguished son of the magnificent Russian civilisation, would weigh carefully what I have written. Let us go forward in peace, security and prosperity for all. Please do not disappoint me.

“All the best to you, your family, your government and people. Please stay in touch.”