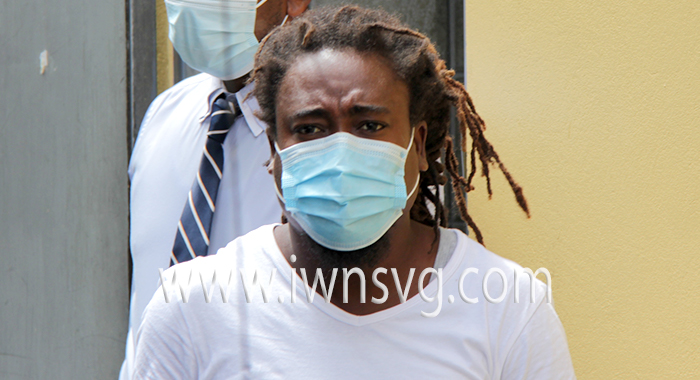 Kenol Alexander outside the Serious Offences Court on Monday, Feb. 28, 2022.

A Union Island man has until Dec. 1 to pay an EC$96,500 fine if he is to avoid a one-year jail term for marijuana possession.

On Monday, at the Serious Offences Court, Kenol Alexander, 36, paid EC$10,000 forthwith and avoided a two-month jail term after he pleaded guilty to possession of 229lbs of marijuana.

He was given nine months to pay the remainder of the fine for the marijuana, which he had in his possession on Saturday in Union Island.

The facts of the case, as read by Sergeant Atnel Ash, are that Corporal 771 Bowens, acting on information, headed a party of Rapid Response Unit officer in search of a brown and black small Toyota van driven by the defendant.

Bowens saw the van parked in a garage bear to the Ashton Public Road. The party of officer approached the van but Alexander was not there.

Bowens contacted the Ashton Police Station for further assistance and the police vehicle returned to the police station.

Bowens remained on the scene and kept the van under observation.

While there, he saw Alexander exited a nearby yard and was heading toward the van.

Alexander complied and Bowens identified himself as a police officer and the defendant said, “Me know.”

Bowens requested a search of Alexander’s person and while doing so the personnel from the Ashton Police Station arrived.

Nothing illegal found on Alexander’s person and the police questioned him about the van.

Alexander said his father owns the vehicle but he (Alexander) operates it.

Bowens then felt the muffler of the van and it was hot, with suggested that it was recently used.

The officer asked the defendant if he had anything in the van to declare, he said, “Officer, yes. I have some weed in the van.”

Bowens randomly cut open a number of the packages and found them to contain plant-like material resemble marijuana.

Alexander was arrested and later charged.

In mitigation, Alexander’s lawyer, Grant Connell said that his client had pleaded guilty at the first opportunity, expressed remorse and assisted the police throughout.

Connell said that Alexander played a lesser role, with little understanding of the scale of operation.

The lawyer said police had conducted an electronic interview with his client. He said the prosecution left out crucial facts in what was presented to the court.

Connell said Alexander operates a taxi to support his family and was hired in Ashton to transport a number of sacks.

“When nearly got to his home, he smelled it was cannabis,” Connell said.

The lawyer said his client pulled into his house and attempted to contact the person who had hired him and the police came.

“He is not the perfect individual for being those walls. How does one deal with someone like that in prison,” Connell said and asked the court to entertain a non-custodial sentence.

He said that Alexander had relatives who were willing to help him pay a fine.

However, prosecutor Station Sergeant of Police Renrick Cato said that if every taxi driver operates as Connell said his client did, “they will always find themselves in situations like these.

“As a taxi driver, the onus is always on you to inquire about what you are transporting…” the prosecutor said.

“What if the bags were full of guns and ammo, or dead people?” he said.

He noted that quantity of drugs, adding that the most recent value he had heard from the High Court was EC$500 a pound.

“If we are to go by that. It will be over $100,000 and the court can multiply that by three. I am not opposed to a financial penalty,” Cato said.

In her comments on sentencing, Chief Magistrate Rechanne Browne said that in recent times, similar quantities of cannabis had attracted a custodial sentence.

She, however, noted that each case must be taken on its merit.

“This is not a little amount of cannabis: 229lbs or 103,966 grammes of cannabis and there is only the possession charge.”

After a break to consider the sentence, the chief magistrate said that she had multiplied the value of the drug by 1.5 as a punitive measure, taking it to $171,750.