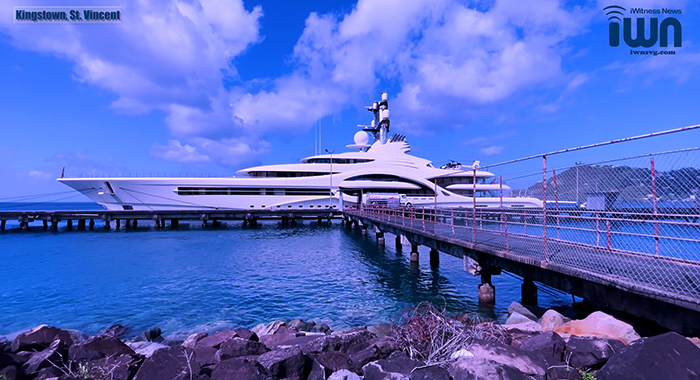 The superyacht “Anna” in Kingstown on Saturday.

The US$250 million super yacht, Anna, owned by Russian billionaire Dmitry Rybolovlev, left Port Kingstown on Saturday after taking on 40,000 gallons of fuel.

The vessel generated some conversation in St. Vincent and the Grenadines when it arrived Friday morning.

The super yacht arrived in SVG at a time when the United States, United Kingdom and the European Union have threatened to seize the assets of some of Russia’s superrich amidst Moscow’s invasion of Ukraine.

iWitness News is not aware that any national, regional or international authority has any specific interest in Anna.

One source with intimate knowledge of maritime traffic in SVG told iWitness News that the 4-year-old vessel is not known to have called at any ports in the country before this week.

The website SuperYachtFan says that the luxury yacht is 110 metres (360 ft) long and is designed to accommodate 16 guests in eight cabins and 32 crew in 16 cabins.

It registered in the Cayman Islands and arrived in SVG from Antigua.

As of Saturday, Rybolovlev, a 55-year-old medical doctor, ranked number #391 on Forbes list of the richest people in the world, with a real time net worth of US$6.6 billion.

Forbes says that he made his fortune from Uralkali, Russia’s largest producer of potassium fertilizers.

Rybolovlev went into business with his scientist father in 1990 after studying medicine at Russia’s Perm Medical Institute.

He is also president and majority shareholder of the Football Club, Monaco.

This week, SVG and 141 other countries voted in favour of the United Nations resolution reaffirming Ukrainian sovereignty, independence and territorial integrity.

The non-binding resolution demands that Russia “immediately, completely and unconditionally withdraw all of its military forces from the territory of Ukraine within its internationally recognised borders”.