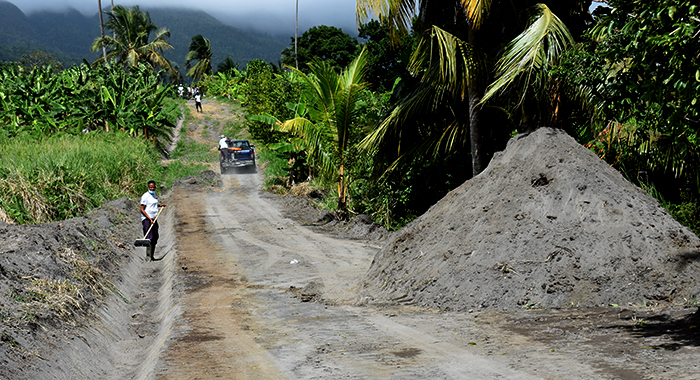 Over 2,000 Vincentians were employed from Feb. 28 to March 4 to clean up ash from last year’s volcanic eruption.

They were hired under a project funded by the Spanish Agency for International Development.

Following the April 2021 eruption of the La Soufriere, UNDP launched its Crisis Response and Recovery Program for St. Vincent.

The programme had three components, the first of which was the household and building damage assessment, was for quick data driven and evidence-based decision-making processes.

The second was cleaning of volcanic ash, clearing debris and supporting economic reactivation in the most affected areas while providing emergency employment.

The third was restoration and regeneration of forestry, watersheds and protected areas damaged by the eruption.

Component 2 was executed in two phases.

Phase one, funded and implemented by UNDP, ran from May to August 2021 while phase 2 was a partnership between UNDP and the Spanish Government, with Spain contributing some EC$1.1 million.

The execution of phase 2 began on Feb. 28, after much delay.

In the execution of component 2, UNDP procured a quantity of equipment, including and personal protective equipment (PPE) to ensure workers had adequate protection to effect the safe removal of volcanic ash.

The hiring and payment of workers were done by BRAGSA, the government‘s executing agency, which was charged with the ash removal duty nationwide.

UNDP Resident Representative for Barbados and the Eastern Caribbean, Valarie Cliff and the Spanish Ambassador Fernando Nogales visited St. Vincent in November to see firsthand the devastation caused by the eruption and the progress on the ash removal.

They were taken on a tour of North Windward and expressed satisfaction with the work done by BRAGSA.