Man who cried on cop’s shoulder jailed for gun 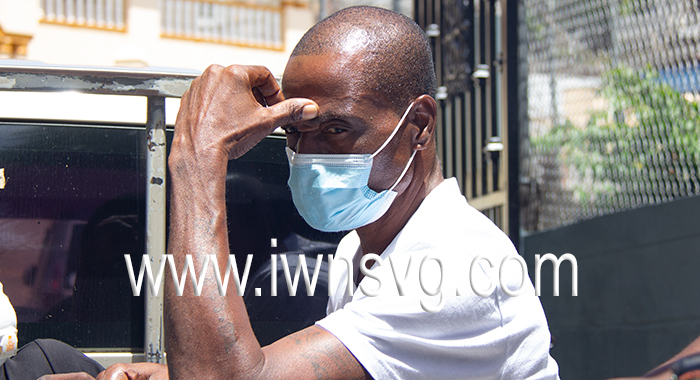 Fitz Allan Keir will spend three years in prison for his crime.

A trucker who placed his head on a police officer’s shoulder and cried when she asked him about his illegal gun has been jailed for three years.

Chief Magistrate Rechanne Browne handed down the sentence on Fitz Alan Keir, who pleaded guilty to possession of a firearm and 27 rounds of ammunition.

He had in his possession at New Adelphi on Sept. 5, 2021 one Smith and Wesson .38 revolver, serial number 16K4706, which was loaded with six rounds of ammunition, as well as 21 rounds in a separate location.

Keir had initially pleaded not guilty when he was arraigned in Sept. 8, 2021 at the Serious Offences Court, but entered guilty pleas on March 8. He was sentenced on March 15.

The facts of the case are that about 3:30 p.m. on Sept. 5, Corporal 615 Williams, acting on information, led a Rapid Response Unit team to Keir’s home.

They met him in his yard and Williams informed him of a report against him pertaining to unlicensed firearm and ammunition.

The officer found nothing illegal on Keir’s person.

Williams asked him to point out the location of his pigpen.

Keir complied and Williams found 21 rounds of .38 ammunition among pig feed and blue paper towels in a bottle.

The corporal arrested Keir and asked him about the gun.

He then broke down in tears and placed his head on the officer’s left shoulder and told her:

“Officer, let me carry you and show you where me throw the gun.”

Keir pointed out some bushes to Williams and her party and she found the revolver there, loaded with six rounds.

“Officer, the gun and bullets are mines,” Keir said, when cautioned.

Station Sergeant of Police Cain, a gazette ballistic expert examined the firearm and found it to be in working order and the ammunition live.

Keir gave a statement in the presence of Justice of the Peace Errol Hazel admitting to the offense.

In mitigation, Kei’s lawyer, Grant Connell, asked the court not to send his client to prison.

He said that Keir had suffered an injury that was recently aggravated in a traffic incident.

However, Chief Magistrate Rechanne Browne noted that the lawyer had not presented any medical evidence related to the initial alleged injury.

In handing down her sentence, Browne said that the charges were serious and explained the steps that the court goes through in arriving at the sentences.

Browne said the aggravating features of the firearm offence were that it was retrieved as a result of information on which the police acted.

“They didn’t just turn up to your residence like that. There was a call, information was relayed and as a result, the police acted.”

Mitigating was the fact that Keir had cooperated with police and surrendered the firearm and ammunition to the police.

The court concluded that the aggravating and mitigating features of the offenses balanced off each other.

Regarding Keir as an offender, the court found no aggravating features, while his remorse was a mitigating feature.

Browne noted that he had pleaded guilty but not at the first opportunity.

As Keir had not pleaded guilty at the first opportunity, he was given a one-eighth discount, rather than the maximum of one-third.

This took four months off the sentence. A further two months was deducted for Keir remorse, bringing the sentence for the firearm to three years.

He was sentenced to eight months in prison for the six rounds of ammunition found in the firearm and 1.5 years for the 21 rounds.