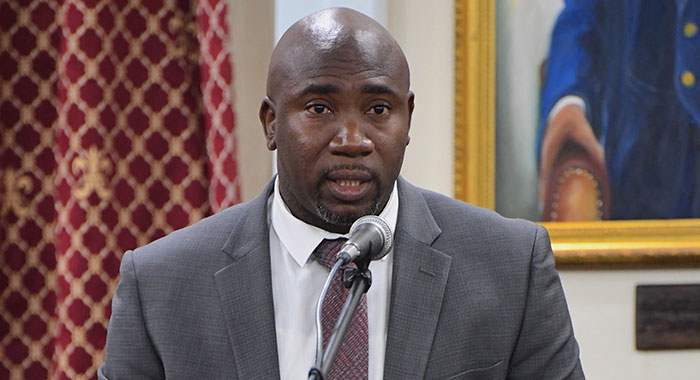 MP for Central Leeward, Orando Brewster says that the proposed building of a rock pier at Jackson Bay, Layou is not a political issue.

The proposal has resulted in protests in the Central Leeward town, where there are already two wharfs.

Brewster, spoke on Thursday from New York, where he is on official business, and said that he is confident that the outcome of the application process would be in the best interest of the constituency and residents of Layou.

“… it is not a political issue. Let me just highlight that,” he said on his party’s radio station.

“So I have seen comments that ‘the government done give them permission’. It is not so and we must educate and inform our people as well,” Brewster said.

SVG Aggregate Inc., which operates a stone quarry in the Layou mountains, is asking planning authorities to permit the construction of a rock pier at Jackson Bay.

The proposed pier would extend about 150 feet into the sea so as to allow for the docking of barges.

Brewster said he had been receiving calls on the issue.

“And, let me just say, firstly, as the MP for central leeward. My work is for the people. And, I have constantly been doing that,” said Brewster, who was elected to office in November 2020.

“So on this issue as well, it is what is in the best interest of the people of Central Leeward, that I will support. However, I must say and I hate that persons are making this thing a political issue when it’s not.”

He noted that anyone could apply to the Physical Planning Board for permission to build.

“… essentially what we’re seeing here is that an entity has applied for permission to construct the jetty. In the same way, if he wants to build his house, he has to apply for permission, submit a plan and so on and so forth.

“There’s a process after that. The Physical Planning Board would  — for example, if you’re going to build in a swamp, they would deter you and say, ‘Listen, your structure is not gonna last, if you put it in this area. And that is why they are there.”

Brewster said people had speculated that the government had approved the application.

“… and that is absolutely not true and let me denounce that now… And everyone is given a due diligence, because the Physical Planning Board would have to do their studies and their assessment…”

He noted that the public has 14 days within which to object to the application.

“You have to get those documentation into the Physical Planning Board, to let them know, listen, I don’t think this thing is suitable for here and so on and so forth…

“Because, listen, it doesn’t make sense that you go about causing havoc and slandering and telling untruths. So, it is in the beginning phase, and, the folks from Layou, there is an objection to the building of this jetty.

“And they have to do the necessary documentation and paperwork to get it into the Physical Planning Board. And I think they have up until Friday. I want to reassure folks that I am aware of this issue, I have been in contact with persons on the ground in Layou as well. And it is just a matter of doing the work and getting the thing done properly.”

Brewster said he did not “like the line that we’re going down” — an apparent reference to the protest on Wednesday.

“Because this matter has not even come to the Cabinet as yet, because there is a process and we have to understand that, that the government just cannot make a decision of its own.”

The Physical Planning Board is an independent entity made up largely of the holders of various government offices.

It is not clear why an application to the Physical Planning Board would go before the Cabinet, as the minister suggested.

“So let the folks know even though that I’m out of state, I am fully aware as to what is happening in Central Leeward, in Layou, and I have spoken to persons there on the ground, and I think they may be able to get in there no subjections (sic) and so on before the time is out.

“And I will always stand with my people and for my people and that is what I was elected for. However, there must be a due process, and everyone must be given a fair chance to make an application, and so on and so forth.”

The MP said he did not want the proposed construction of the jetty to become a political issue.

“Because very often we would hear persons from the opposition, and the least –every opportunity they get to — and this thing should be done in a proper manner.

Asked whether he, as MP, had been briefed by the entity proposing to construct the jetty, Brewster said:

“Well, like I said that that document hasn’t been placed at the government level as yet, because this is just the application phase. But since the issue, I have tried to reach out to the stakeholders, who is the entity who did the application, but I really didn’t get a call back from them.

“Because, as the minister, and as the representative, essentially you can’t be biased, but you have to hear both sides of the story. But at the end of the day, I am confident that whatever happens will be in the interests of the constituency, and the community of Layou…

Brewster said that he had discussed the issue with Ben Exeter

“And you must call a spade a spade and if they are going down the political line, you must call it out. As a matter of fact, I spoke with Ben Exeter a few days ago, as well concerning this same issue.”

“It is not, and he is seeing it from the same line. He said to me, ‘Brewster, this is not political; it’s not a political issue.’

“So, we just have to let this process happen. And I am sure that the outcomes of this whole application would be in the best interest of the people of Central Leeward. So I am letting the process proceed.”