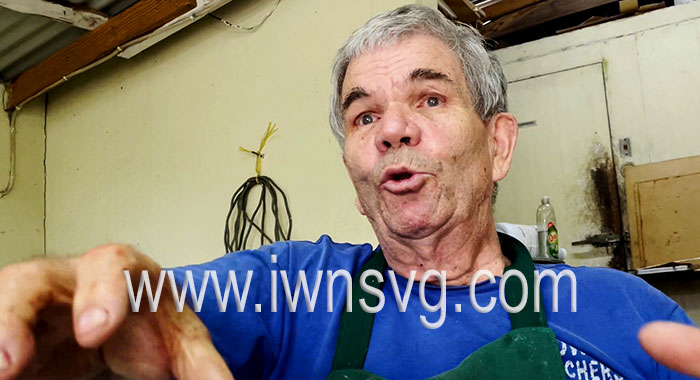 Butcher Richard Gibson says he is having difficulty finding meat to supply his customers.

A local butcher is considering closing his shop amidst a shortage of meat, even as St. Vincent and the Grenadines has been supplying Grenada with cattle and other livestock.

Gibson said he was unable to fill his orders for sausages for local hotels and that the retail prices of meat has increased significantly because of the shortage.

“If I don’t get any meat, by next week I’ll be closing. Beef and mutton — there is a severe shortage,” he said.

Gibson said that his mutton was done “and farmers have said they haven’t got any animals”.

Gibson’s comments sounded like a repeat of a 2019 interview with iWItness News, when he complained about the same issues.

On Sunday, he was speaking three days after Minister of Agriculture, Saboto Caesar told Parliament that his government did not allow the most recent visit by the Grenadian businessman who buys livestock in St. Vincent.

Caesar was responding to a question tabled by opposition senator, Israel Brue, about the export of livestock.

Bruce was not in Parliament and Opposition Leader Godwin Friday asked the question on his behalf.

Bruce said that over the past few years, the Ministry of Agriculture and the minister have taken pride in live animals being sold to businesses in Grenada.

He said that recently local butchers have been complaining about the shortage of animals to slaughter and so satisfy their local customers.

The minister was asked to say whether his ministry had considered halting, even temporarily, the shipment and sale of live animals to Grenada so as to give local butchers and small business operators an improved opportunity.

The senator also wanted to know what production mechanism the ministry had put in place to facilitate this shortfall in livestock to meet the needs of local butchers and dependent small business operators.

Bruce also asked about the ministry’s current considerations to increase the fight against praedial larceny as a measure to also address the shortfall.

Caesar outlined the history of the livestock trade between Kingstown and St. George’s, which began a decade ago.

This led to the signing of a memorandum of understanding that Grenada will help SVG to establish a cocoa, condiments and spices industry.

In turn, SVG would sell livestock to Grenada and provide for them planting material for root crops, bananas and plantains.

Caesar said that as far back as 2014, the Veterinary Division recognised the importance of keeping a critical mass in the national herd and submitted six items to the Cabinet for approval.

“So, the cabinet basically approved a risk management mechanism because …  we want to ensure that issues of food security and food sovereignty, that food must always be available, accessible and affordable in the country — that these must be addressed.”

Export on ‘pause for a moment’

He said that two week ago, the Grenadian buyer, Jude Jack, was expected in SVG to purchase animals.

However, in a Feb. 18 interview, Gibson told iWitness News that a severe scarcity of meat began to emerge after the Christmas season.

“Because just before Christmas, they exported about 70 cattle and a lot of pigs and small ruminants. So this created a shortage and the farmers put their price really high,” Gibson said.

He said that just before Christmas, he sold mutton for EC$12 a pound.

“I see a sign in town display mutton at $18 a pound,” Gibson said, adding that after he ran out of mutton at Christmas, he told customers to drive into the rural areas, where it was being sold at EC$ $14-15 a pound.

Gibson said that despite the increased cost to butchers, consumers in St. Vincent want to pay the same price for meat year-round.

“In my experience, the price fluctuates — supply and demand. So if I buy cattle costing $200 – $300 more, I expect to up my price to compensate for that $300. But the Vincentian public, they don’t see it that way,” said Gibson, who also operated a butcher shop in the United Kingdom before returning to St. Vincent.

Gibson was also concerned about the quality of the meat supplied to local butchers.

“I used to get an average cattle about 600 pounds — nice, mature animal. The average weight that is coming in now is 200-250 pounds. So they’re now killing off all the younger animals. So this will create another shortage along the line.

“If a young calf is born today, it’s 15 months before it can be impregnated,” he said, adding that gestation is another nine months.

“When it calves, it’s another two and a half years to three years before the beef is mature enough to sell as good meat.”

Meanwhile, the agriculture minister told Parliament that his ministry is discussing with Prince Edward Islands help in artificial insemination and embryo transfer.

“Jamaica has never stopped supporting us with cattle semen,” he further said. “We have technicians available from Cuba and technicians came to St. Vincent and Grenadines to participate in a national artificial insemination drive.”

He said the government is looking into a public-private partnership “because this industry, the livestock industry, cannot be

“And I don’t want all of the work to reside in the Vet department. I want young persons or entrepreneurial, probably beneficiaries of the PRYME programme, to come forward and participate.”

Caesar’s comments came even as Gibson complained that his ministry was yet to send some young people to learn from him the art of butchering.

“Saboto had indicated to me that he would send some people from the YES programme so I could train them. On several occasions, I phoned the office and spoke to the minister’s secretary, who said he would get back to him,” Gibson said on Feb. 18, adding that it had been 12 weeks since their last conversation.

The agriculture minister said several young people have been selected and have gone off to study “issues touching and concerning livestock production”.

He spoke of the impact of last April’s eruption of La Soufriere volcano, adding that many pastures have been destroyed and tractor services are available for pasture rehabilitation.

“Again, I encourage the farmers to expand production,” Caesar said.

He said that as it pertains to praedial larceny, the legislation is still at the Attorney General’s Chambers.